Beterbiev remains the only active champion with a 100 percent knockout ratio. 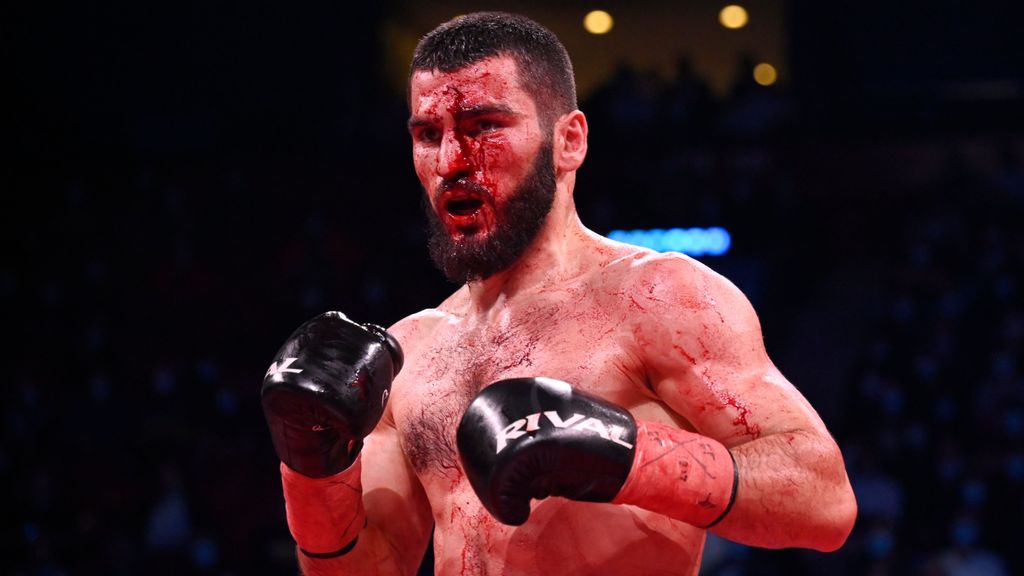 Boxing champ Artur Beterbiev is ready for all comers.

He craves an undisputed all-Russian 175-pound battle with WBA counterpart Dmitry Bivol, as well as a clash with twice-beaten four-division champion Canelo Alvarez.

Beterbiev (18-0, 18 KOs) is coming off a sensational three-knockdown, second-round TKO of Joe Smith on June 18, which added Smith’s WBO crown to the IBF and WBC titles he already owned.

In victory, Beterbiev secured the sixth defense of a crown won in November 2017 by career-high 12th-round knockout of Enrico Koelling, who entered at 23–1 (6 KOs), but was floored twice and stopped for the first time.

“It’s nothing personal, but I want [Dmitry] Bivol. I want the WBA belt,” said Beterbiev through his trainer, Marc Ramsey, during an exclusive interview with Zenger. “I also want to challenge Canelo Alvarez. I am open to fighting the other champions. I hope that my promoter is able to strike a deal that is the best for me.”

Alvarez returns to action for a September 17 defense of his undisputed 160-pound championships against Gennady Golovkin (42-1, 37 KOs), whom he defeated by majority decision in September 2018 following their draw in 2017.

Will Beterbiev’s KO streak continue against Bivol or Alvarez?

“The objective is never to KO someone. I don’t want to make this kind of prediction. Bivol and Canelo are good boxers, and I respect them,” Beterbiev said. “The target is the win and a good performance. I do have confidence in my abilities, but I don’t want to talk about how I can beat [Bivol and Alvarez.] I just want to do it.”

Beterbiev remained the only active champion with a 100 percent knockout ratio by vanquishing Smith (28-4, 22 KOs), who had gone 4-0 (2 KOs) since losing to Bivol by a 12-round unanimous decision in March 2019.

Smith staggered Bivol at the bell, ending the 10th round. But he couldn’t finish off the champion, who required a gloved hand on the ropes to balance himself as he returned to his corner.

“Bivol was momentarily hurt by Smith in their fight, whereas Beterbiev blasted Smith out in two rounds. There is no question that Beterbiev’s win over Smith was more impressive than Bivol’s,” said BoxingScene.com’s Corey Erdman, who was ringside for Bivol-Alvarez.

“If they fought 10 of the same opponents, Beterbiev might stop all 10 of them, and Bivol might beat them all, 120-108, across the board.  Bivol is not the concussive puncher that Beterbiev is, but that doesn’t mean Bivol isn’t capable of beating Beterbiev.”

Bivol and Beterbiev are rated eighth and 10th pound-for-pound by the Transitional Boxing Rankings Board, while Bivol is eighth and Beterbiev unranked by RingTV.com. Alvarez is ranked fifth and sixth in each, respectively.

“Bivol is on more pound-for-pound lists because he beat Alvarez, who was most commonly regarded as the best fighter in the world,” Erdman said. “People who make pound-for-pound lists need a way to reward that victory.  I would guess odds makers would make Bivol-Beterbiev a pick-em fight or very close to it.”

Beterbiev cares little about being ranked lower than Bivol, nor does he make much about their comparative triumphs over Smith.

“My whole team is focused on my performances and winning fights. The comparisons are difficult to make because Bivol and I have different styles, and we win in different ways,” Beterbiev said. “I don’t care about the rankings. I have no idea how they make their decisions and have control over their choices. For the moment, that’s not important. We know our worth.”

Nicknamed “The Beast” and “The Irish Bomber,” Smith was two bouts removed from winning the vacant crown by majority decision over Maxim Vlasov in April 2021, making his only defense by ninth-round stoppage over Steve Geffrard in January.

The 32-year-old Smith owns definitive first- and eighth-round stoppages of title challenger Andrzej Fonfara and two-division champion Bernard Hopkins from June and December 2016, landing a six-punch combination that launched the 51-year-old Hopkins through the ropes, onto the floor and into retirement.

Smith also owns a ninth-round knockout of former champion Eleider Alvarez, his early-round, head-swiveling right-left combination sending the Colombian through the two bottom ropes and onto the ring apron before being counted out by the referee.

Stopped for the first time in his career, Alvarez had previously title split bouts with Kovalev, losing his WBO crown by unanimous decision in February 2019 after having dethroned “The Krusher” by the seventh-round TKO in August 2018.

But Ramsay coached Beterbiev to respect the punching power of Smith, whom he set up for the counter punches with first-round lateral moves before stalking and finishing him off in the second.

“Of course, everybody was expecting us to go face to face with Joe Smith like two oncoming trains, but we have a lot of respect for Joe Smith,” Beterbiev said. “So our plan was different and just a bit more sophisticated. This victory was very significant for us.”

Beterbiev overcame the most adversity during his come-from-behind fourth- and ninth-round stoppages of previously unbeaten Callum Johnson (October 2018) and slick-boxing southpaw Marcus Browne, a former champion who was stopped for the first time in his career in Beterbiev’s previous fight in December.

Beterbiev rose from a second-round knockdown as the result of a left hook from Johnson, who entered at 17-0 (12 KOs) and was after his fifth consecutive stoppage victory before being halted for the only time in his career.

Not only was Beterbiev bleeding from a gash in the middle of his forehead caused by a third-round clash of heads against Browne, but he trailed on two judges’ cards and struggled to see through a mask of crimson.

Beterbiev floored Browne (24-2, 16 KOs) in the seventh and final rounds for the victory. This occurred after a ringside physician had granted him “one more round” following an examination before the fifth.

If the fight had been stopped, the Russian-born fighter would have lost a split-decision to Browne.

“I try to learn something from all of my fights, and in those two, I stayed calm and made the adjustments that had to be made,” Beterbiev said.

“I simply continued to demonstrate the focus, composure and determination of a great fighter and showed what courage I already knew I had.”

Beterbiev won twice in 2019 with fifth- and 10th-round knockouts of Radivoje Kalajdzic and Oleksandr Gvozdyk in May and October.

Kalajdzik entered at 24-1 (17 KOs) and hit the deck in the third round before being stopped for the only time in his career. Gvozdyk at 17-0 (14 KOs) was dropped three times in the last round as Beterbiev added Gvozdyk’s WBC crown to his IBF version.

The triumph over Browne followed Beterbiev’s one-knockdown, 10th-round TKO in March 2021 of Adam Deines, a southpaw who entered at 19–1–1 (10 KOs).

“Beterbiev has better wins than Bivol at light heavyweight and is ranked above him by the same outlets,” said Erdman, who was ringside for Berterbiev-Brown. “But that isn’t a slight to those outlets at all. Right now, my sense is that both Bivol and Beterbiev should be favored over Canelo.”