Tanks A Lot: Ukrainian Forces Joke They Are On Safari To Create A Russian Tank Cemetery

The video was obtained from the Armed Forces of Ukraine. 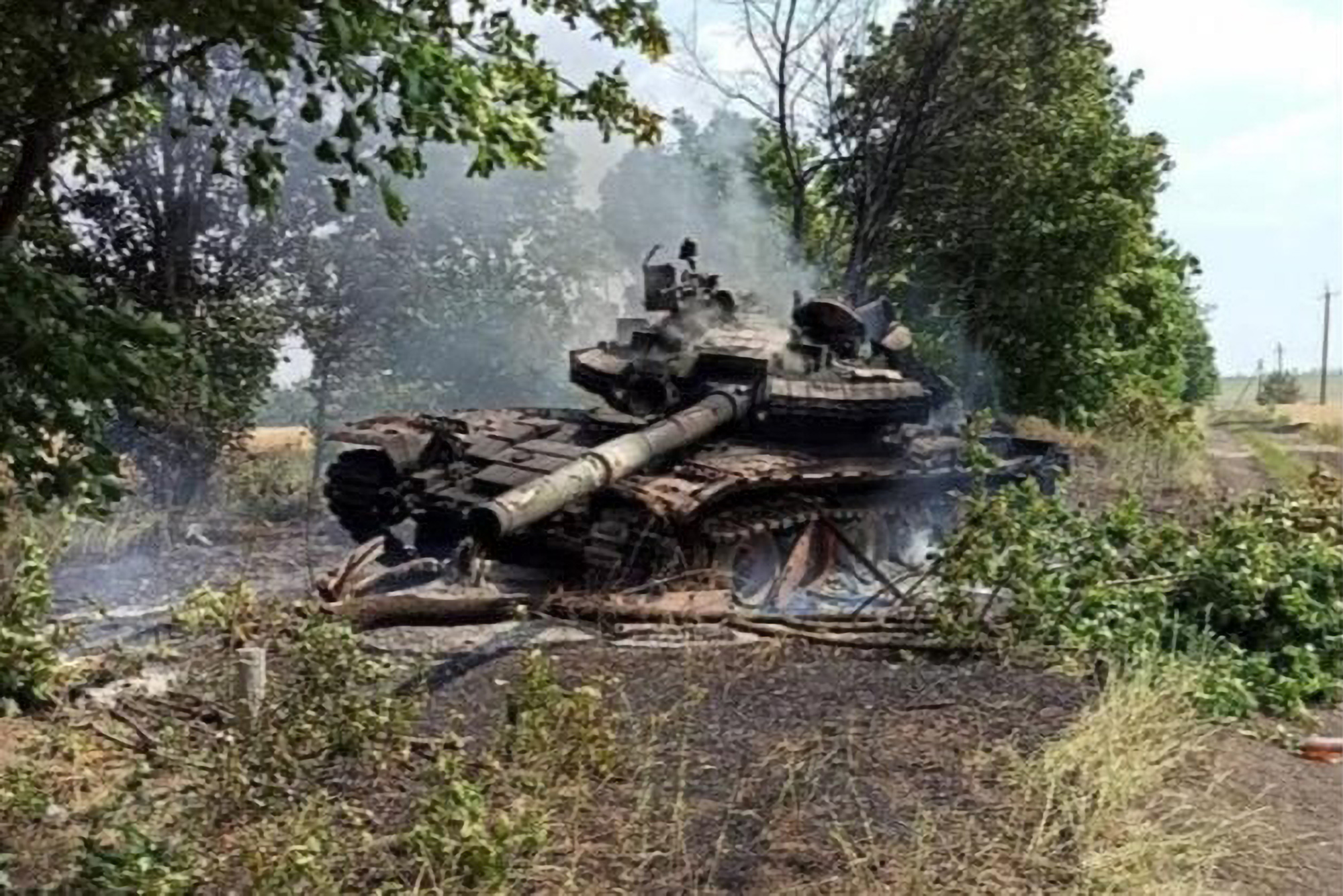 Destroyed Russian tank by the Ukraine airstrike in the south of Ukraine. (@AFUStratCom/Zenger)

These images appear to show Ukrainian forces destroying a slew of tanks, with one shot even apparently hitting the spot occupied by five of the Russian war machines.

It is unclear where exactly in Ukraine the footage was filmed. Still, it was also relayed by the Office of Strategic Communications (StratCom) of the Ukrainian Armed Forces, who joked: “The ‘Ukrainian Safari 2.0’ continues.”

StratCom also said in a statement on Friday, July 8: “Ukrainian military struck three times with pairs of helicopters the stronghold, the accumulation of the Russian Armed Forces and equipment in the area of &ZeroWidthSpace;&ZeroWidthSpace;Davydova Brod and Pravdyny. This was reported by Operational Command ‘South.’

“As a result of the strike, 12 servicemen, a tank, a ‘Msta-B’ howitzer, and an ammunition depot were destroyed.”

Russia invaded Ukraine on February 24 in what the Kremlin continues to call a “special military operation.” Today marks the 135th day of the invasion.

According to Ukrainian officials, three people have been killed, and another five have been injured after Russian forces fired rockets at Kharkiv.

Russia’s defense ministry has claimed that it killed Ukrainian servicemen who were trying to raise Ukraine’s flag on the recently retaken Snake Island. Still, Ukraine has denied that any of its servicemen on the island were killed.

Ukraine has summoned the ambassador of Turkey, claiming that Turkey has allowed a Russian ship carrying thousands of tons of grain allegedly stolen from Ukraine to leave exports in one of its ports. Kyiv alleges that the vessel is transporting stolen cargo amounting to 7,000 tons of grain.

The resignation of British Prime Minister Boris Johnson has been met with sadness in the Ukrainian capital Kyiv, most notably by Ukrainian President Volodymyr Zelenskyy, who said that Johnson has been a “true friend of Ukraine.” But Moscow reacted with delight to Johnson’s departure, with a Kremlin spokesperson saying: “He doesn’t like us. We don’t like him either.”

Kazakhstan’s President, Kassym-Jomart Tokayev, has called for a diversification of the country’s oil routes a day after a court in Russia suspended operations on a major export pipeline.

The Russian court ordered the suspension of Kazakh oil exports to the West for a month. Russia controls the Novorossiisk Black Sea oil terminal, where tankers are loaded with oil that transits, via a pipeline, from Kazakhstan’s Tengiz oilfield. Western sanctions have restricted Russia’s oil and gas exports, increasing demand for producers like Kazakhstan.