Mi-8AMTSh ‘Terminator’ attack helicopters are a special variant of the Mi-8AMT helicopter. 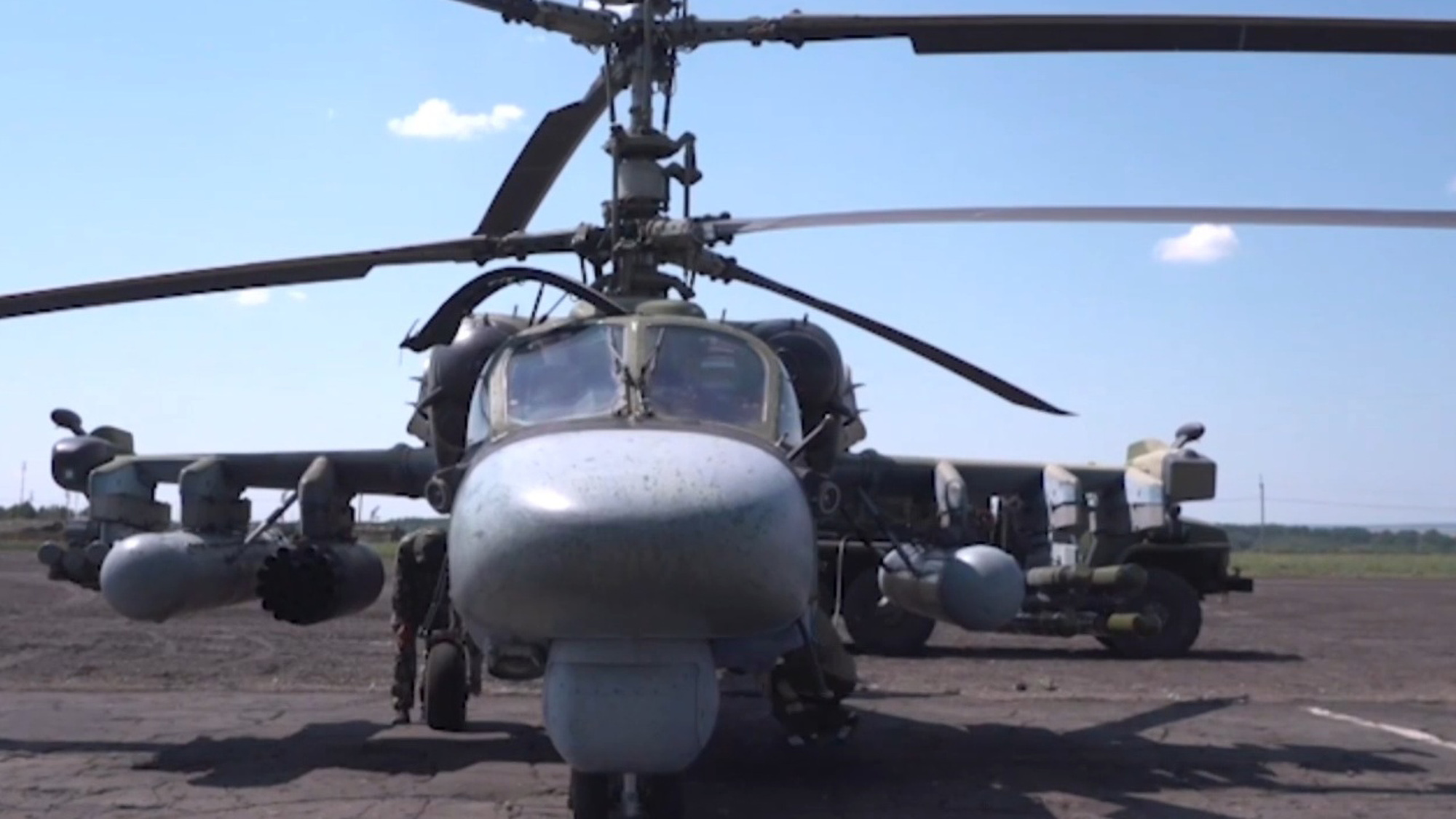 The footage apparently shows heavily armed helicopters taking to the skies before heading toward unseen targets and unleashing their ordnance.

The footage then shows at least one helicopter, with a white ‘V’ daubed on its side, returning to base and coming in to land.

The ‘V’ is one of the symbols, as well as the letters ‘Z’ and ‘O,’ that can be seen painted on Russian military vehicles taking part in the invasion of Ukraine.

The Russian MoD also claimed (in a separate statement in Russian): “The crews of Ka-52 Alligator attack helicopters and Mi-8AMTSh Terminator attack helicopters of the army aviation of the Eastern Military District continue to successfully carry out the tasks of a special military operation on the territory of Ukraine.”

Mi-8AMTSh ‘Terminator’ attack helicopters are a special variant of the Mi-8AMT helicopter, which is more commonly used as a military transport chopper. Its weaponry is similar to that of the Mi-24 gunship and it is also equipped with more armor.

The Russian MoD also claimed in its statement in Russian: “The Ka-52 ‘Alligator’ is a helicopter for close support of troops on the battlefield, capable of attacking any targets using modern means of detection and target designation. It can solve the tasks of ensuring the security of transport columns and landing operations, as well as air cover for any offensive actions of ground units.

“The Mi-8AMTSh Terminator is a multi-purpose helicopter that can be used for landing and fire support, destroying enemy armored vehicles, transporting ammunition and other cargo, as well as for search and rescue operations and evacuation of the wounded.

“The main feature of the Mi-8AMTSh, which distinguishes it from other versions of this type of helicopter, is the armament. In addition to two 7.62-mm PKT machine guns, depending on the nature of the tasks performed, anti-tank guided missiles ‘Shturm-V’ or ‘Ataka’, units with 80-mm S-8 unguided rockets, containers with twin 23-mm guns GSh-23, hang four bombs weighing 250 kilograms or two 500 kilograms each. To protect against low-flying aircraft and helicopters, the Mi-8AMTSh uses Igla-V missiles.”

The Russian MoD statement also quotes a commander of the crew of a Ka-52 helicopter, who is named only as Alexander, as saying: “The task was set to destroy enemy armored vehicles. The crew coped with the task superbly – the armored vehicles were quickly found and destroyed.”

He is also quoted as saying: “Now the enemy is hiding more and more in forests, ravines, but we still find them.

“Every day we carry out tasks to support assault and operational-tactical aviation. Our vehicle is armed with Vikhr anti-tank missiles with a range of up to 10 kilometers.

“The system allows you to find and destroy enemy targets under any weather conditions,” said Denis, navigator-operator of the crew of the Mi-8AMTSh helicopter. – We must always cover our own, help them. They work, and we cover them.”

There are currently five military districts – which act as administrative divisions for the Russian Armed Forces – in Russia: the Western, Central, Eastern, Southern and Northern Military Districts. The Eastern Military District’s jurisdiction is in the Far Eastern Federal District of Russia, which corresponds to the eastern part of the country. Its capital is Vladivostok.

Russia invaded Ukraine on February 24 in what the Kremlin continues to call a “special military operation.” July 8 marks the 135th day of the invasion.

Russia’s MoD has claimed that it killed Ukrainian servicemen who were trying to raise Ukraine’s flag on the recently retaken Snake Island, but Ukraine has denied that any of its servicemen on the island were killed.

The resignation of U.K. Prime Minister Boris Johnson has been met with sadness in the Ukrainian capital Kyiv, most notably by Volodymyr Zelensky, who said that Johnson has been a “true friend of Ukraine”. But Moscow reacted with delight at the demise of the British Prime Minister, with a Kremlin spokesperson saying: “He doesn’t like us. We don’t like him either.”