The Narellan fire department, police, and the Rural Fire Service were subsequently called in to aid in a major haul-out.
By Lee Bullen July 11, 2022
Facebook
Twitter
Linkedin
Email 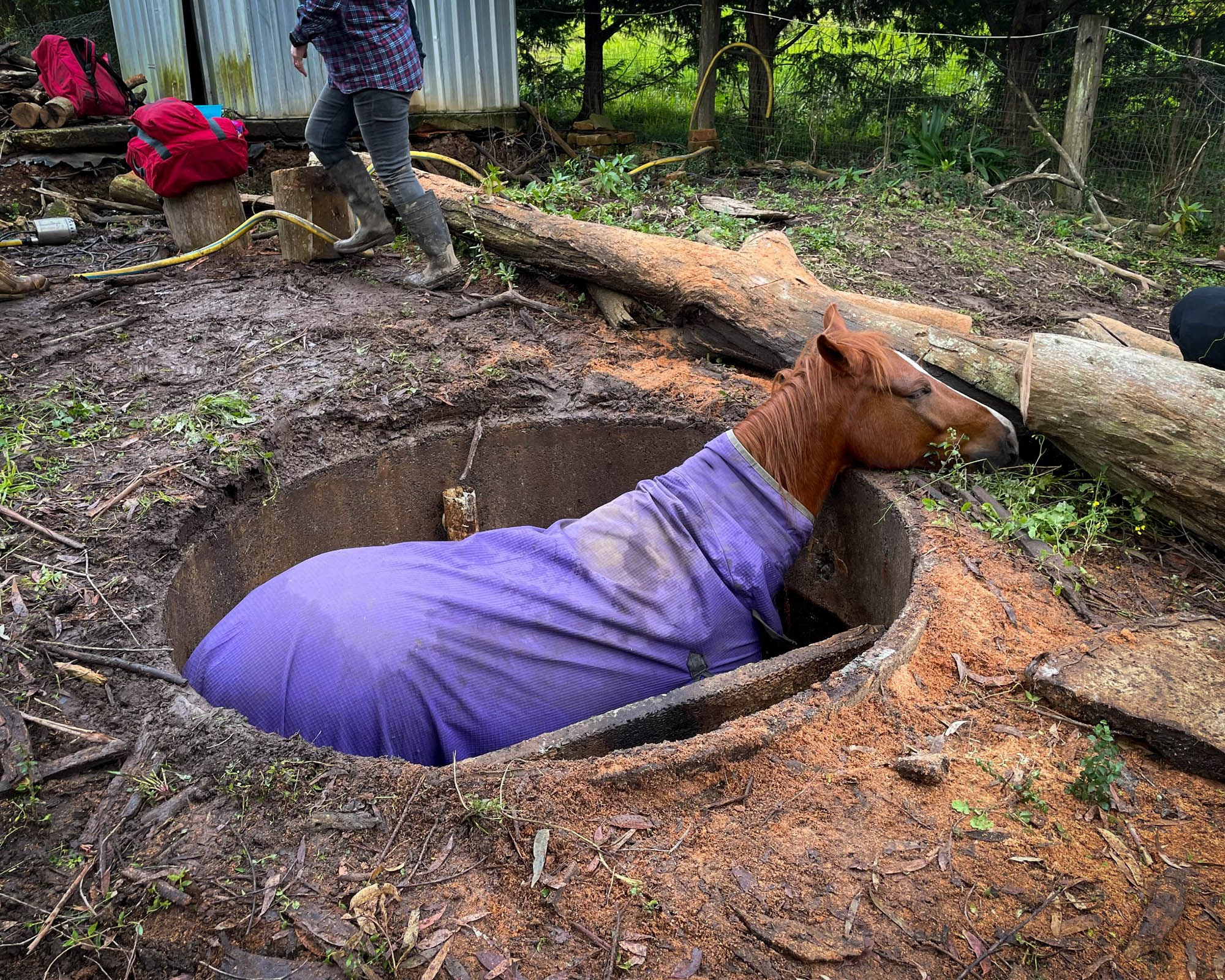 Five-year-old chestnut horse rescued after he fell into a storage tank at Belimbla Park, southwest of Sydney in July 2022. (@frnsw/Zenger).

Resourceful firefighters staged a dramatic rescue when a half-ton horse got himself wedged in a water tank in a bizarre slip.

Jester – a chestnut five-year-old – got stuck fast in a garden water tank, located at the Wanawong Street property in the rural area of Belimbla Park in the Macarthur region of New South Wales, just after 8 a.m. on Thursday, July 7, in Australia.

He had rendered himself helpless when he accidentally fell into the half-filled water tank and promptly became trapped in the confined space. Luckily, his fall was broken by the rainwater contained inside.

The Narellan fire department, police, and the Rural Fire Service were subsequently called in to aid in a major haul-out.

Rescuers used an excavator they had reportedly borrowed from a neighboring property, as well as some heavy lifting gear to winch the 400-880-pound stock horse from the tank.

They had managed to wrap the strong-looking sling all around the horse’s torso and carefully lifted him out like a feather.

After the rescue, Jester was checked by a vet for injuries.

Fire and Rescue NSW (FRNSW) said: “Resourceful FRNSW firefighters have used a sling and an excavator to rescue a horse that fell into a water tank today at Belimbla Park.

“Jester, a five-year-old Chestnut, thankfully had his fall softened by water which had half-filled the tank, but the 400-kilogram stock horse found himself trapped.

“A FRNSW crew from Narellan attended the scene along with Police and the Rural Fire Service.

“The firefighters called in a specialist FRNSW crew from Liverpool, equipped with heavy-animal lifting equipment.

“As Jester stood distressed, the fire crews drained the water and, borrowing an excavator from a neighboring property, rigged up several slings, carefully lifting Jester horse to safety.”

The fire department added: “We understand Jester is doing well!”

Local residents afterward have speculated that the horse’s fall was possibly caused by the tank’s broken lid, which they say could have happened as a result of a massive tree falling which had been struck by storms and some heavy rainfall that week.

This is the second animal rescue that the Fire and Rescue NSW team have involved themselves in. On July 5, the fire service reported on rescuing several greyhound dogs from their flooded home in Londonderry.

They gave a short statement following the incident, saying that on that occasion they had turned to using rescue boats to ferry the dogs to safety.