“Over 1,100 valuable bronzes from West Africa found their way into the collections of German museums.”
By Thomas Hochwarter July 11, 2022
Facebook
Twitter
Linkedin
Email 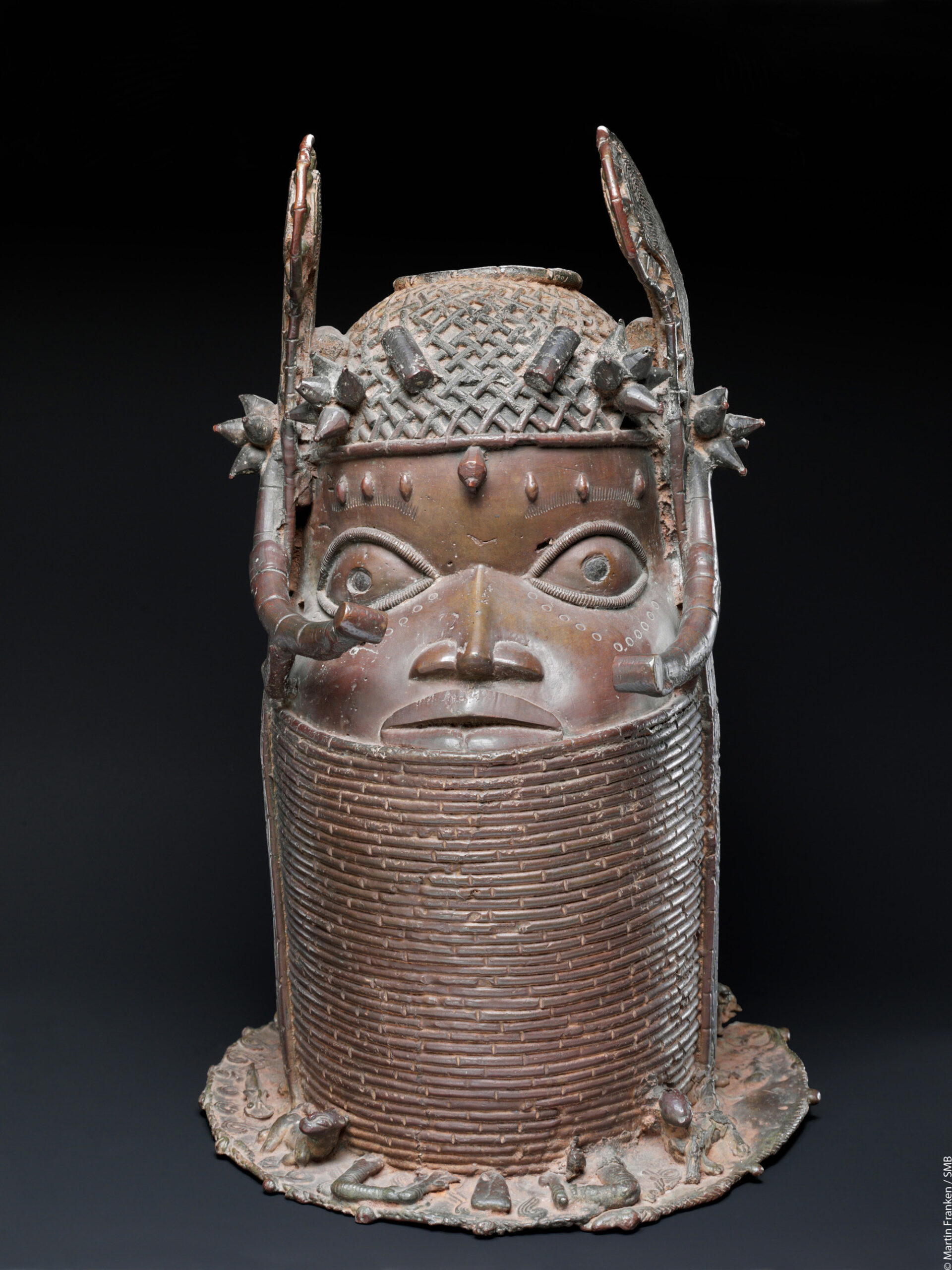 One of the first two artifacts that were returned to Nigeria representing a memorial head of a king dating back to the 18th century, III C. (Ethnological Museum of the Berlin State Museums, Prussian Cultural Heritage, Martin Franken/Zenger)

German authorities have returned the first of a treasure trove of bronzes looted from West Africa during the colonial era.

The sculptures – known as the Benin Bronzes – were taken from the Kingdom of Benin in the 19th century while Europe was carving up the continent’s treasures.

Now the first two objects from Germany’s Ethnological Museum collection in Berlin – a commemorative head of a king and a relief plaque depicting a king with four attendants – have been handed back to Nigeria.

They had originally been brought back to Germany by an ambassador and a businessman.

Now hundreds more are due to follow the historic handover.

British troops under Royal Navy officer Sir Harry Rawson conquered the Kingdom of Benin – which has no relation to today’s republic of Benin – in 1897.

They seized artworks from the royal palace and exiled King Oba Ovonramwen in revenge for an attack on an earlier British expedition.

Rawson’s troops captured and sacked Benin City, bringing to an end the Kingdom of Benin, which was eventually absorbed into colonial Nigeria.

Thousands of objects were shipped to London but hundreds more ended up in museums across Europe and North America.

The Ethnological Museum Berlin currently holds more than 500 objects from the former Kingdom of Benin.

The museum has been a member of the Benin Dialogue Group since 2010. The aims of this international group, formed in 2007, are cooperation between museums in possession of Nigerian cultural heritage items and the restitution of illegally acquired artworks.

The German Foreign Ministry announced: “Over 1,100 valuable bronzes from West Africa found their way into the collections of German museums some 125 years ago as a result of pillage in the colonial era.”

The ministry added that Germany and Nigeria “are together clearing the way for the return of the artifacts.”

The Berlin State Museums Group – a group of 17 cultural institutions – says this is just the first step of a comprehensive handover.

Nigerian Culture Minister Lai Mohammed, Germany’s Foreign Minister Annalena Baerbock and her Nigerian counterpart, Zubairu Dada, signed a declaration to transfer the ownership of more than 1,100 precious sculptures known as the Benin Bronzes at the Federal Foreign Office in Berlin.

Dada said: “I am delighted to be part of this auspicious event which, in my opinion, will go down as one of the most important days in the celebration of African cultural heritage.”

Tuggar added: “Germany has set the bar high for righting colonial wrongs. This is a new era in cultural diplomacy.”

The commemorative head of a king – which has now been returned – was in unknown possession after the conquest of the Kingdom of Benin.

The other object handed back by German officials – a relief plaque depicting a king with four attendants – was looted from the Royal Palace in Benin City in 1897.

Both artworks came into the possession of German consul and businessman Eduard Schmidt between 1897 and 1898. They were sold to the museum in Berlin in 1898.

The German Foreign Ministry announced: “Germany has struggled for a long time to deal with the history of art from colonial contexts.

“There are more than a thousand bronzes from the former Kingdom of Benin – in what is today Nigeria – in the storerooms and collections of a total of 20 German museums.”

According to the ministry, academics assume that more than 5,000 bronzes were stolen and illegally brought to Europe in the context of pillage.

It underlined: “The proceeds from the subsequent sale of the stolen artworks helped to finance the high costs of the expeditions of the day.”

Experts from Germany and Nigeria have cooperated in uncovering the origin and whereabouts of the bronzes.

The settlement establishes a legal foundation for the transfer of ownership of the individual works of art.

German and Nigerian government officials have also agreed that some artifacts will remain in German museums on loan.

The German Foreign Ministry praised Nigeria’s decision to give the green light as a “very special gesture of trust and of amity.”

The Ethnological Museum Berlin was founded in 1873. Its collection today consists of more than 500,000 works of art and culture from outside Europe.

The institution is part of the Museum Island complex in the city center of the German capital, which was added to the UNESCO list of World Heritage Sites in 1999.

The Kingdom of Benin was an empire in what is now southwestern Nigeria.

It has no historical relation to the modern republic of Benin.

The Benin Kingdom was formed out of the previous Edo Kingdom of Igodomigodo around the 11th century, and lasted until it was annexed by the British Empire in 1897.