Fanta-sting Size: The World’s Largest Stingray Is Around The Same Length As A Mini Cooper

The massive ray was caught in the Mekong River, Cambodia, and had a whopping length of 13.04 feet. 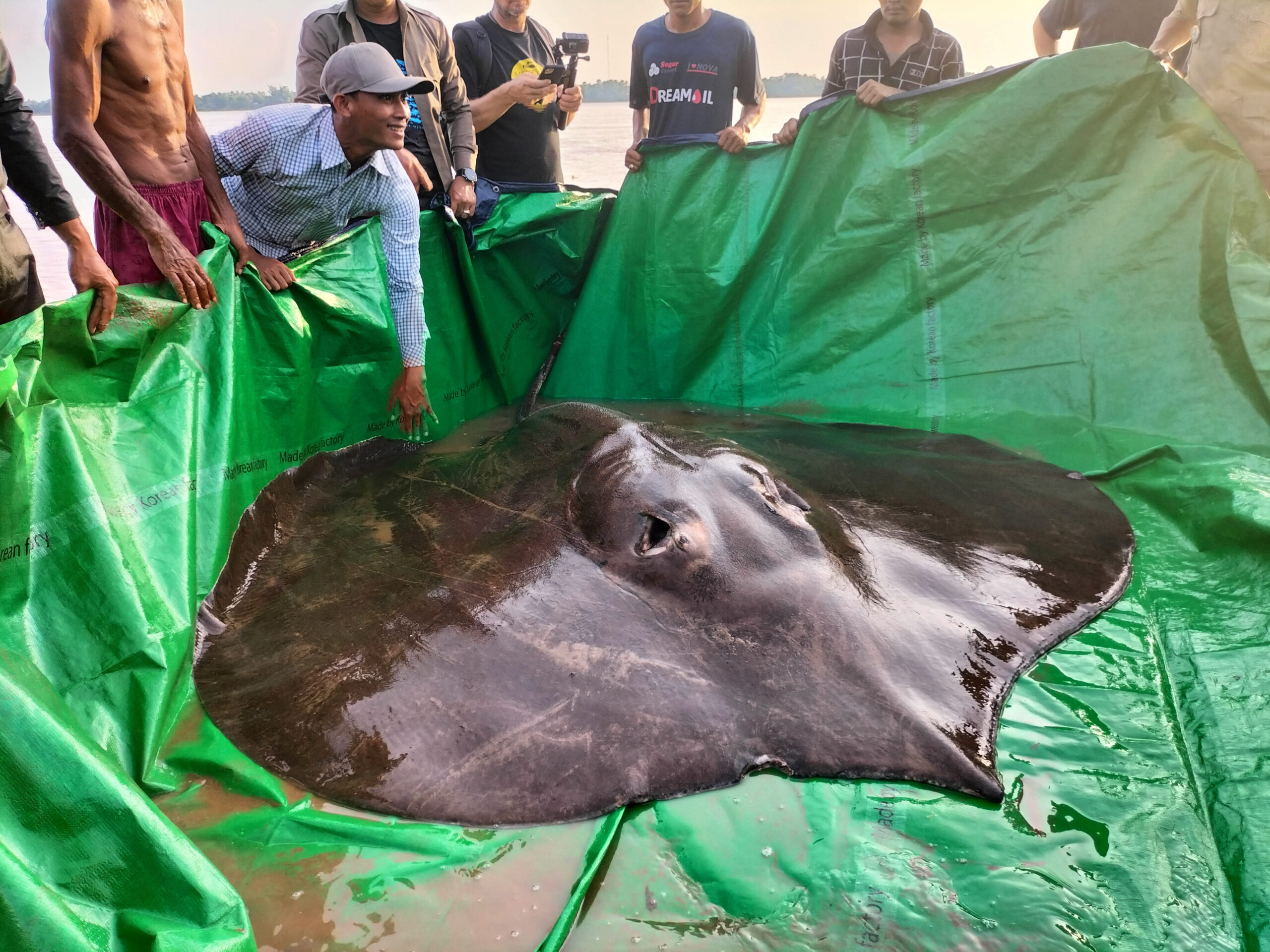 The world’s largest stingray is the same length as a Mini Cooper. (Matthew Newby, SWNS/Zenger)

The world’s largest stingray has been discovered – and it’s the same length as a Mini Cooper car.

The massive ray was caught in the Mekong River, Cambodia, and had a whopping length of 13.04 feet.

Guinness World Records has confirmed the startling discovery of this individual Urogymnus polylepis – which weighed 299.08 kilos (661 pounds) – as the world’s largest freshwater fish ever to be officially recorded.

The researcher who helped measure the ray, Jack Eschenroeder, described the discovery as “surreal”.

He said: “Even as I was taking measurements and scrubbing her skin for the surgery, I could hardly believe she was real.

“Her tail was as big around as my arm!”.

The enormous freshwater stingray is easily distinguished from other types because of its pointed snout.

Unfortunately, this species is listed as endangered on the International Union for Conservation of Nature (IUCN) Red List of Threatened Species – but its existence provides hope for its survival.

Eschenroeder, 33, said: “The fact that such a large individual was found is a hopeful sign for the ecosystem.

“Her massive size suggests that rays in at least some reaches of the river have access to the habitats and prey they need to live long lives and get very large.

“Megafish like this ray are a bellwether for river health – as an ecosystem is degraded, it’s the largest species that tend to vanish first.”

The megafish – named Boramy after ‘full moon’ in the Khmer language of Cambodia due to her round shape – was discovered on June 23.

It was captured by a fisher from the village of Koh Preah, an island in the Mekong.

The river runs through China, Myanmar, Laos, Thailand, Cambodia, and Vietnam, and is home to several species of giant freshwater fish

The fisher had connections to The Wonders of Mekong project, where Eschenroeder currently works, which consists of a research team who study the biodiversity, climate, and hydrology of the Mekong River.

The team had made connections with local fishers in hopes of having the opportunity to learn more about these massive rays.

The fisher contacted Eschenroeder’s colleagues from the project on the morning of June 14 to inform them that a humongous ray had been captured.

Meanwhile, Eschenroeder had been working his way downstream installing underwater microphones, known as acoustic receivers, to study fish movement throughout the Mekong River.

Eschenroeder, from St. Louis, Missouri, said: “We had tagging equipment on hand, which provided a unique opportunity to put a tag in the giant ray and hopefully learn about its movements.”

The rest of the researchers began coordinating with the other project members, who immediately drove to meet with the fishers and officials from the Cambodian Fisheries Administration.

To weigh the ray, the team moved her from where she had been held, a deep pool in the river, to the beach, where they placed her on a large tarp.

They put her back in the water and held her in the tarp to allow her to stay wet while they measured her and conducted the tag implantation surgery.

The next day, the researchers did a quick sweep with the mobile hydrophone to see if the ray was still in the area.

Jack said: “We didn’t pick up her tag anywhere near the beach where she was released, which I think is a good sign that she was healthy and swam off somewhere.”

He also explained how there could be bigger stingrays out there.

He said: “This is the largest individual on record.

“Wonders of the Mekong is aware of several giant stingrays that have been captured in the area in the past several months, and this most recent individual was by far the largest.

“The last one was captured in late May and weighed less than half what the most recent individual weighed.

“I think it’s entirely possible there are even larger stingrays out there, but to date, this is the biggest one we’ve ever seen.”