The creature was a member of the radiodonts, apex predators that were the ‘Great White sharks’ of their time. 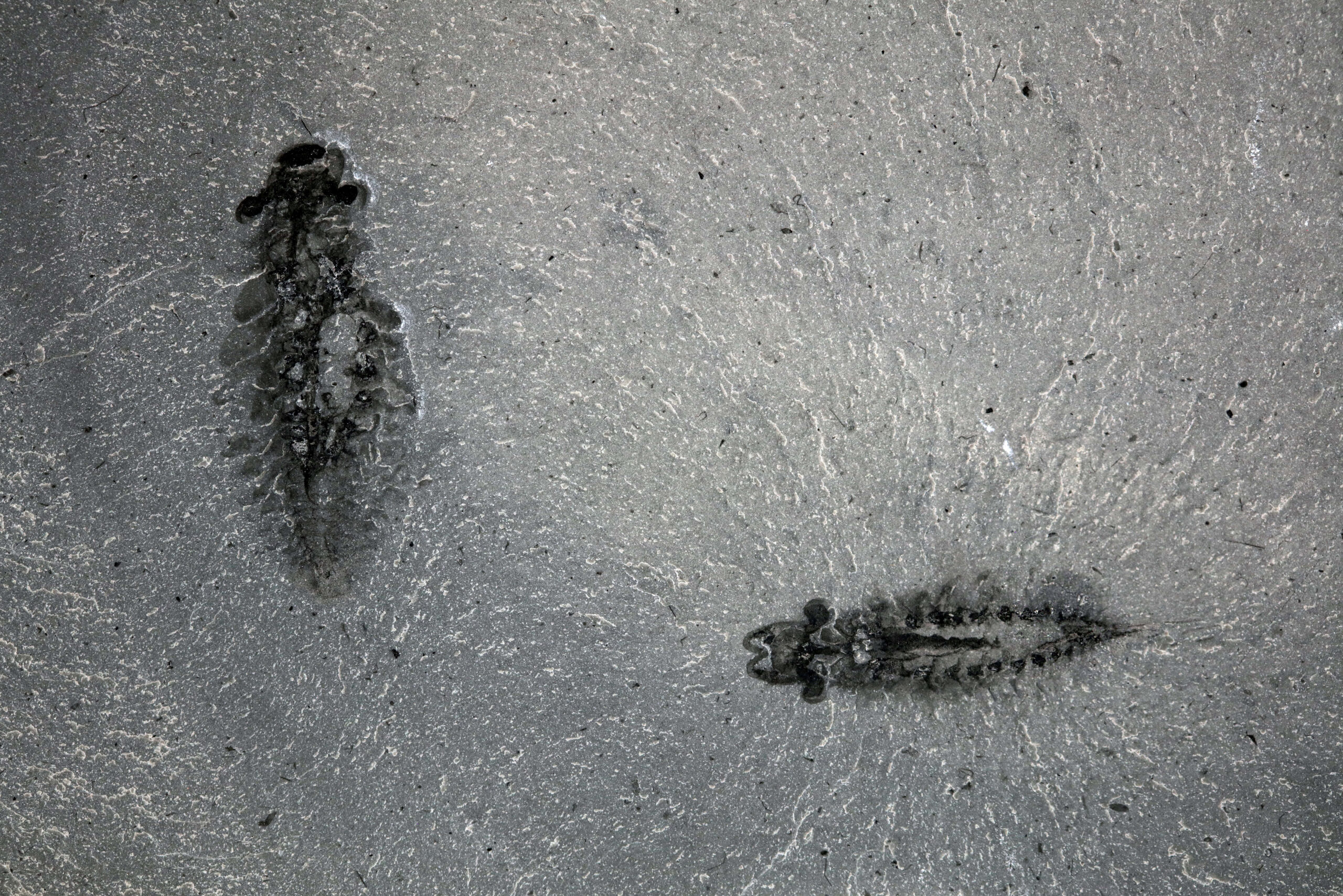 The world's oldest brain has been found in the remains of a three eyed prawn that swam the oceans more than half a billion years ago. (Simon Galloway, SWNS/Zenger)

The world’s oldest brain has been found in the remains of a three eyed prawn that swam the oceans more than half a billion years ago.

Its complete central nervous system is still visible – providing unprecedented insights into the ancestors of insects, spiders and crustaceans.

Named Stanleycaris hirpex, it was described as “the stuff of nightmares”. It had two eyes “on stalks” with a bigger one in the middle – and spiked claws.

It lived during the Cambrian ‘explosion’ – a period of rapid evolution when most major animal groups emerge in the fossil record.

The creature was a member of the radiodonts, apex predators that were the ‘Great White sharks’ of their time.

Reaching more than three foot in length, they were a type of early arthropod – creepy crawlies with jointed limbs.

Despite Stanleycaris’ bizarre appearance, it is the contents of its head that has scientists most excited.

In 84 individuals unearthed at Burgess Shale, a prehistoric graveyard in the Canadian Rocky Mountains, the brain and nerves are still preserved – after 506 million years.

Lead author Joseph Moysiuk, a University of Toronto PhD candidate, said: “We can even make out visual processing centers serving the large eyes and traces of nerves entering the appendages.

“The fine details are so clear it is as if we were looking at an animal that died yesterday.”

The new specimens provide a glimpse into what the ancestral nervous system looked like. Finding any fossilized soft tissue is rare – but this is unique.

Most fossils we have are bone and or hard body parts such as teeth or exoskeletons.
Brains and nerves are made of fatty like substances that normally don’t survive.

The central nervous system coordinates all neural and motor functions. In vertebrates, it consists of the brain and spinal cord.

In arthropods the brain is more condensed with a chain-like series of interconnected masses of nervous tissue resembling a string of beads.

Stanleycaris’ brain was composed of two segments, the protocerebrum and deutocerebrum.

They connected with the eyes and frontal claws, respectively – and control vision and antenna signals in arthropods today.

Mr. Moysiuk, based at the Royal Ontario Museum, added: “We conclude a two-segmented head and brain has deep roots in the arthropod lineage.

“Its evolution likely preceded the three-segmented brain that characterizes all living members of this diverse animal phylum.”

In modern arthropods – such as grasshoppers and other insects – the brain also has a tritocerebrum.

It connects to the labrum, a moveable upper lip, and integrates sensory information from the other two brain lobes. An extra compartment has radical implications.

Repeated copies of many arthropod organs can be found in their segmented bodies. Working out how they line up is key to understanding diversification.

Mr. Moysiuk said: “These fossils are like a Rosetta Stone, helping to link traits in radiodonts and other early fossil arthropods with their counterparts in surviving groups.”

In addition to a pair of stalked eyes, Stanleycaris had a big central peeper at the front of its head – a feature is never before seen in a radiodont.

Co-author Professor Jean-Bernard Caron, who is Mr. Moysiuk’s supervisor, said: “The presence of a huge third eye in Stanleycaris was unexpected.

“It emphasizes these animals were even more bizarre-looking than we thought. It also shows us the earliest arthropods had already evolved a variety of complex visual systems like many of their modern kin.”

He added: “Since most radiodonts are only known from scattered bits and pieces, this discovery is a crucial jump forward in understanding what they looked like and how they lived.”

During the Cambrian, radiodonts were among the biggest animals. Anomalocaris, dubbed the ‘weird wonder’, was at least 3 feet 3 inches – making it a sea monster.

At no more than eight inches, Stanleycaris was much smaller. But it would have been an impressive killer – at least three times the size of most rivals.

Radiodont means ‘radiating teeth’. The unusual animals were named after their toothy, circular jaws. They were adapted to the dim light of deep water.

Stanleycaris’ sophisticated sensory and nervous systems would have enabled it to efficiently pick out small prey in the gloom.

Added Mr. Moysiuk: “With large compound eyes, a formidable-looking circular mouth lined with teeth, frontal claws with an impressive array of spines, and a flexible, segmented body with a series of swimming flaps along its sides, Stanleycaris would have been the stuff of nightmares for any small bottom dweller unfortunate enough to cross its path.”

The study in Current Biology is based on an analysis of a previously unpublished collection of 268 specimens of Stanleycaris.

Most were collected in the 1980s and 1990s from layers above the famous Walcott Quarry at Yoho National Park, British Columbia.

They are part of the extensive collection of fossils from Burgess Shale – a World Heritage site – housed at the Royal Ontario Museum.