Shell Garage: Three-legged Tortoise Gets A Set Of Wheels

“It works wonderfully well - he moves even quicker than his three neighbors.”
By Simona Kitanovska July 8, 2022
Facebook
Twitter
Linkedin
Email 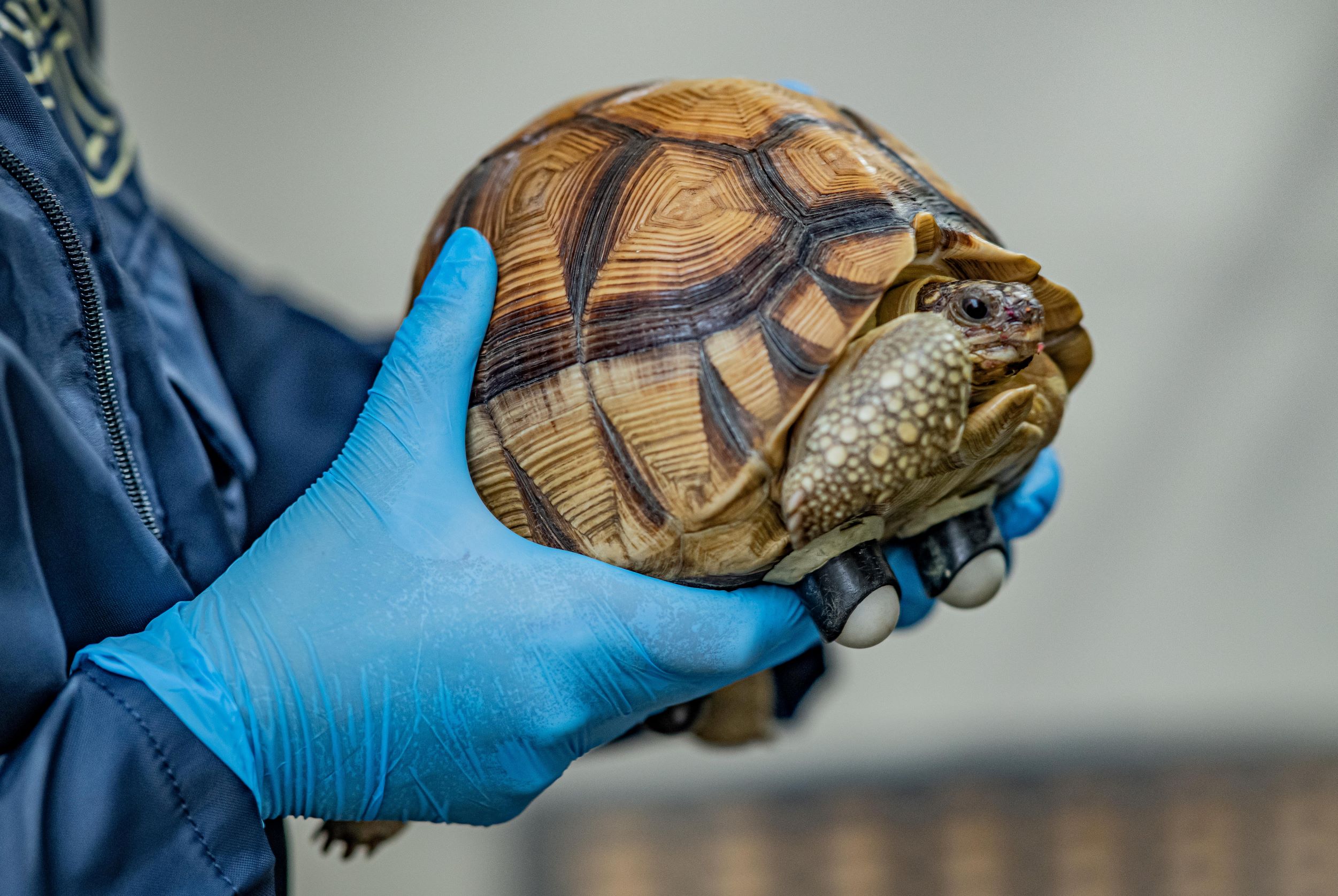 A three-legged tortoise which was rescued from smugglers has been given a new lease of life by a zoo after being fitted with wheels to help him get around. (Simon Galloway SWNS/Zenger)

A three-legged tortoise, which was rescued from smugglers, has been given a new lease on life by a zoo after being fitted with WHEELS to help him get around.

The critically endangered plowshare tortoise, which is rarest tortoise on Earth, was seized from illegal smugglers in Hong Kong in 2019.

The male, named Hope, was given a new home at Chester Zoo where he was fitted with roll-on deodorant-style prosthetic rollers to help with his mobility.

It is now hoped the tortoise will help save its species from extinction in their native Madagascar where fewer than 300 remain.

They are said to be among the most threatened animals on the planet due to being poached by illegal wildlife traders.

Hope was discovered by customer officials in a suitcase with 57 endangered tortoises when traveling from the Comoro Islands off the coast of East Africa.

The illegal trafficker was subsequently jailed for two years, the heaviest penalty ever imposed under Hong Kong’s animal protection laws at the time.

Hope was found to be missing his front left leg, as well as claws on his hind left leg, and three specially-made support rollers were fitted under its lower shell.

Veterinarians at the zoo in Chester, an English city dating to its founding by Romans in 79 AD, have now modified his transportation which now sees him move around faster than any other tortoises in his enclosure.

Gerardo Garcia, curator of lower vertebrates and invertebrates at Chester Zoo, said: “Hope is an incredibly special tortoise, for many reasons.

“Fewer than 300 now remain in the wild, mostly due to their over-exploitation by illegal wildlife traders – leaving them functionally extinct in their home of Madagascar.

“In addition Hope has a remarkable life story, having been rescued from smugglers, discovered to have a missing leg and then having a prosthetic mobility support specially fitted to help him get around.

“It works wonderfully well – he moves even quicker than his three neighbors.

“He’s settling in nicely to his new home and hopefully, in several years’ time once he’s more developed, he’ll go on to produce offspring and contribute to the survival of the species thanks to the vital insurance population in conservation zoos.”

In the wild, the plowshare tortoise is found only on a small, remote stretch of sand, rock and bamboo on the island of Madagascar.

The species is listed under the highest protection category of the Convention on International Trade in Endangered Species (CITIES), prohibiting all forms of international commercial trade.

It is listed as critically endangered by the International Union for the Conservation of Nature (IUCN) having been poached to the very brink of extinction.

Just 63 plowshare tortoises exist legally outside of Madagascar, as part of conservation breeding programs battling to save the species.

With relatively little known about the species, scientists at the zoo are now using 24-hour CCTV cameras to monitor the tortoises and analyze their behavior.

Kat Finch, a conservation scientist at the zoo, said: “Our special cameras are enabling us to get an around-the-clock insight into the behavior of the tortoises for the very first time.

“We’re looking not just at the group as a whole but at the individuals within it too.

“Interestingly, we’re seeing there are significant differences in behavior between them, and we believe this has never been documented before.

“Plowshare tortoises are so, so rare and it’s vitally important that we learn as much detailed information about them as we possibly can.

“This data may help us to further improve their care and ensure we’re providing the best possible conditions to help them thrive.

“Ultimately, we hope that by closely studying them in this way, we’ll unlock information that will optimize chances of successful breeding.

“With so few plowshare tortoises remaining on the planet, every single birth could be absolutely crucial to their survival.”

Highly prized for their distinctive gold and black shells, they fetch exceptionally high prices on the illegal, international black market – a result of their ever-increasing rarity.

The illegal wildlife trade is worth $16.6 billion a year and is the fourth largest international crime after drugs, arms and human trafficking.

Mike Jordan, director of animals and plants at Chester Zoo, added: “This is a species that’s sadly under huge pressure for its survival and there’s a very real possibility that this species could be lost forever.

“That’s why Hope is such an important addition to the zoo.

“We refuse to sit back and see this incredible species disappear and so our aim now is to maintain an ark population, by coming together with some of the world’s other leading conservation zoos to breed a genetically viable safety net population and prevent its extinction.”

«Previous Post
Parking Mad: Woman Denied Parking Permit On The Street Where She’s Lived For 25 Years»Next Post
Talking Down: Adults Say More Than A Thousand Negative Things About Themselves Each Year