“It feels fantastic to break the record – we’re just waiting for the paperwork to go through before it’s confirmed.” 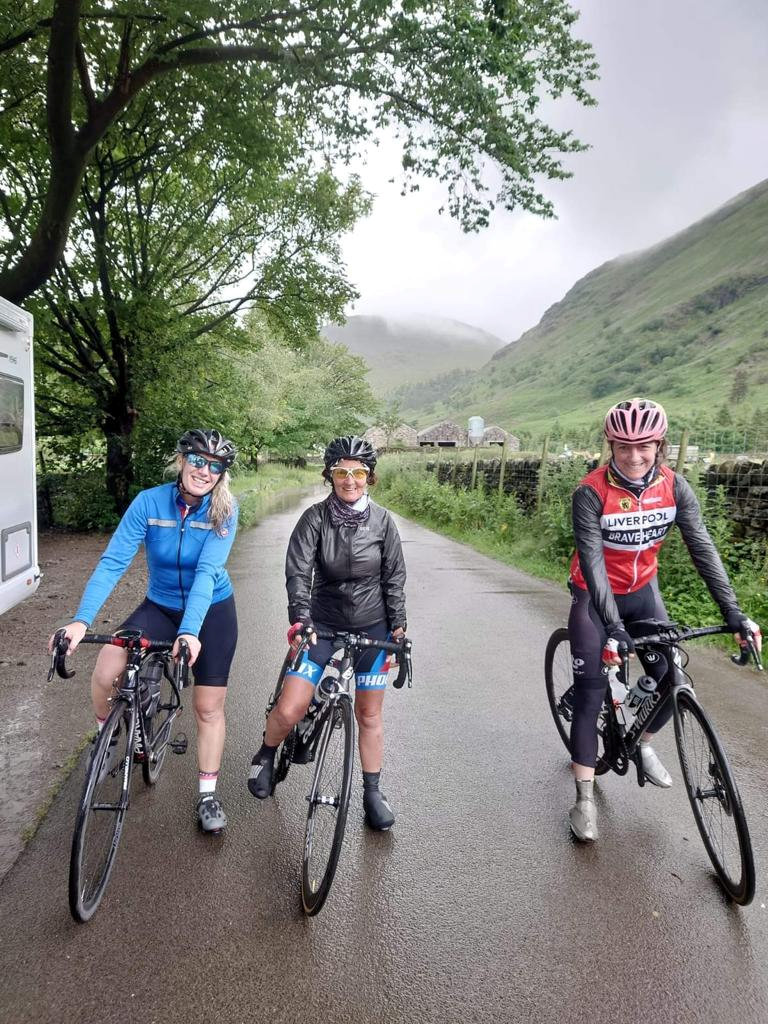 Three women believe they have broken the world record for the fastest female Three Peaks Challenge on bikes.

The previous record for the fastest time to complete the Three Peaks Challenge by bicycle (female), set last year, was timed at 67 hours and 30 minutes.

So, while Janet, Louise and Hannah’s attempt is yet to be ratified by Guinness World Records, it’s looking good.

Janet from Bickerstaffe, Lancashire, in the west of England, said: “It feels fantastic to break the record – we’re just waiting for the paperwork to go through before it’s confirmed.

“We did way better than we thought we would – we’re all over the moon!”

The trio set off on their journey at 4 a.m. on June 26, finishing less then three days later.

The trio have competed against each other in time trials for the last nine years, but now have worked together instead to complete the challenge.

As well as likely breaking the record by five hours and 24 minutes, the trio also raised the equivalent of about $3,000 of their $6,000 goal for the Cauda Equina Champions Charity.

They started the fundraiser after a mutual friend of theirs was recently diagnosed with a life-changing illness.

Janet, who began cycling in 2012, says she was inspired to take on the challenge by a previous group of cyclists from Ireland.

“A friend of mine sent me an article of a group of girls from Ireland who did it last year,” she said.

“It instantly appealed to me, so I set out to find some people to do it with.”

The trio battled extreme weather conditions while operating on just a few hours of sleep between rides.

Janet recalls battling gale-force winds at the top of Mount Snowdon, which caused her to fall over and injure herself during the climb.

She said: “We had terrible weather, and when we first started climbing Snowdon there were 50-mile-per-hour winds to negotiate.

“It was a really tough start to the challenge. I actually got blown over and injured my knee – but thankfully I was fine to carry on.

“To be honest, I was a bit scared on the way back down because of the rain and wind.

“Once we’d climbed Snowdon, we cycled 202 miles before we had a four-hour rest break and tried to get some sleep – but even with ear plugs in you could hear the wind.

“Then we got up and scaled Scafell, swiftly followed by a cycle to Tyndrum – another 195-mile journey.”

Finally, they climbed the Ben Nevis peak, but by this point Janet was in so much pain that she could barely walk straight.

She said: “The last climb was horrendous, I was truly knackered. Hannah held my hand and for most of the walk she stayed by my side to support me.

“I’m sure people were looking at me as if I was being dragged up the mountain on my last legs.

“It felt amazing to finish and I’m hoping to do something special like this again soon.”

They completed the challenge between June 25 to 28 last year.