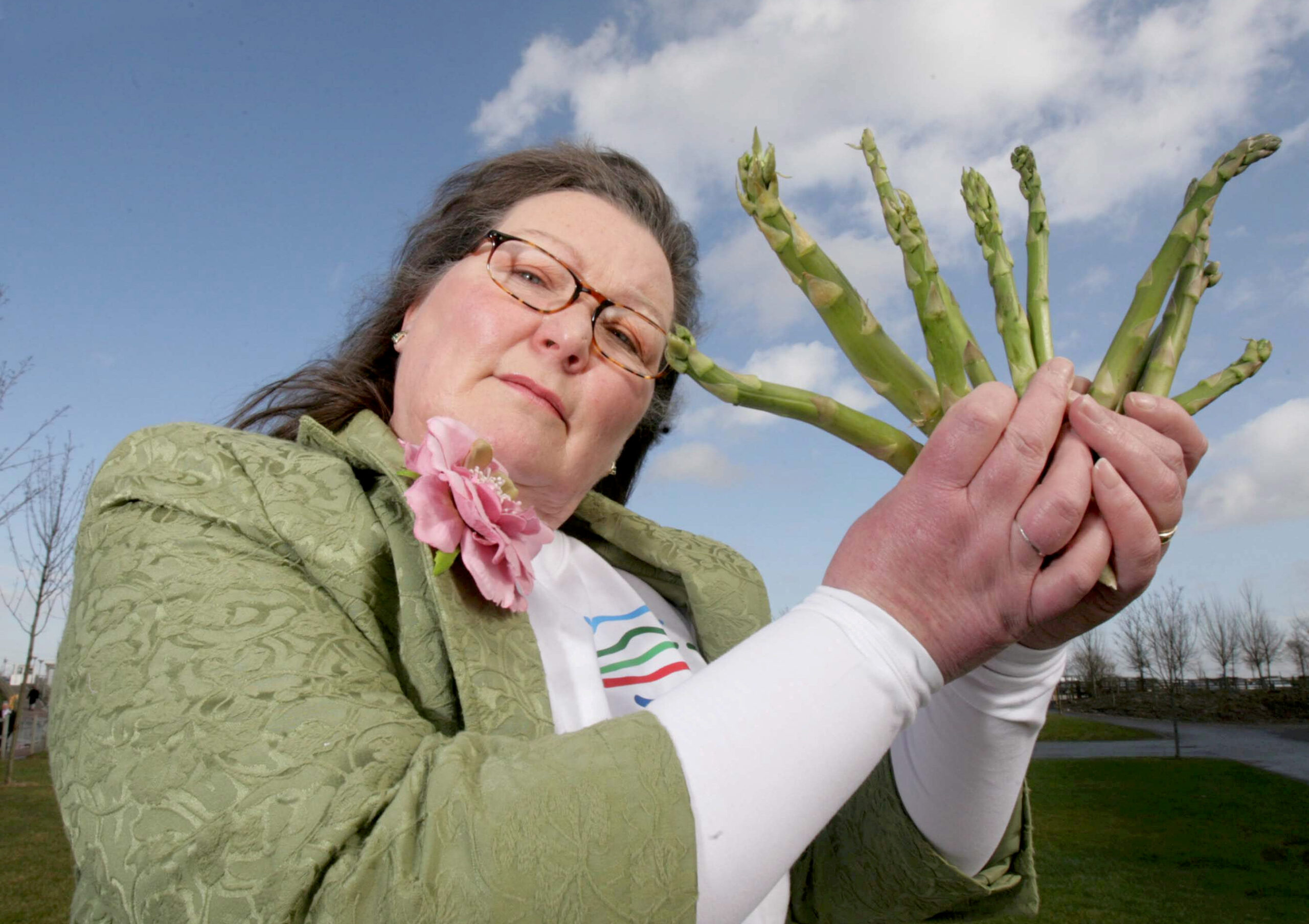 A fortune teller dubbed Mystic Veg who predicts the future using asparagus has revealed the UK's next Prime Minister will be Ben Wallace. (Jon Mills, SWNS/Zenger)

A fortune teller dubbed “Mystic Veg,” who predicts the future using ASPARAGUS, has revealed the next Prime Minister of the United Kingdom will be Ben Wallace.

Jemima Packington, 66, has correctly predicted previous political events by tossing asparagus spears into the air and interpreting how they land on the ground.

Now Jemima says the spears are pointing towards Defense Secretary Ben Wallace to take over as leader once BoJo resigns.

She also believes 100/1 outsider Nadine Dorries could also be in with a shout of taking over as prime minister – and is a more likely candidate then Rishi Sunak or Penny Mordaunt.

Jemima, of Bath, says despite political turmoil gripping the country the asparagus has reassured her Britain will get back on its feet within the coming months.

And if a general election is called she believes it will be a straight shoot-out between Britain’s Tories and Labour with minority parties set to lose seats rather than gain any.

Jemima, who is the world’s only Asparamancer, said: “The asparagus has come up with two front-runners for the next Prime Minister.

“Ben Wallace, which would not be the biggest shock given his prominence with the war in Ukraine but also Nadine Dorries.

“It is pointing more towards Mr. Wallace who appears to be the Tory’s choice so would make more sense, but we could be in for a surprise candidate.

“I don’t think it will be a bookies favorite who will take over, it could be more of a shock.

“With Dorries it could have been her keeping your friends close but your enemies closer, she may well have been playing a game.

“The spears are telling me who it definitely won’t be as well and it won’t be Rishi Sunak or David Davies.

“In terms of a cabinet it has been rather unclear, but the asparagus has told me there may well be a place for Nigel Huddleston, the MP for Worcestershire.

“The rest of the cabinet would be like throwing darts at pictures of politicians, not even the spears can give me any indication.

“Just a few days ago they were telling me Boris would try to stay and cling on – and that’s exactly what he did do.

“The future is not looking bleak though and I believe it will be a case of short-term pain for long-term gain.

“If there is a general election it will be a close shoot-out between the two major parties and any minority party will lose seats rather than gain any.

“But I said at the start of the year the economy would rally and become stronger and I still see that ahead.

“Maybe this change is what may spark a change in living standards in the UK for the better, who knows.

“Since COVID, life has changed along with perceptions of what people deserve and expect.

“Despite the rail strikes and threat of teacher strikes and the ongoing war in Ukraine the asparagus still predicts a brighter future and better times ahead.”

The current favorite to take over as Tory leader is Penny Mordaunt, with odds of 9/2 followed by Rishi Sunak with odds of 13/2.

For the rest of 2022, Jemima has predicted Keir Starmer will not continue as leader of the Labour Party as well as more sadness and scandal for the Royal Family.

She also says her asparagus spears say Croatia will be the shock winners of this year’s World Cup soccer championship in Qatar in December.

Jemima began making predictions as an eight-year-old and said she inherited the gift from her elderly aunt who used to read tea leaves.

She said: “My technique has not changed and I still cast the asparagus spears and interpret the patterns in them.

“Seeing the patterns for me is instantaneous, possibly that is because I’ve had years of practice.

“I predicted Boris Johnson would become Prime Minister about four years before he did and everyone laughed their socks off.

“I’m not too triumphant about my ability but I am often right with my predictions.”

Last year Jemima predicted Christmas celebrations would be modest affair which was the case in many households as the Omicron variant took hold.

She also predicted more royal births and a bereavement and was proven right when the Sussexes, Harry and Meghan, announced she was pregnant again and Prince Philip died.

In 2019 she correctly predicted cricket success for England, Big Brother returning to our screens, and U.S. romantic musical ‘A Star is Born’ winning an Oscar.

Before that she correctly foresaw Andy Murray winning Wimbledon, the Euro crisis, and the credit crunch.