Formula For Fear: Infant Formula Use Triples In Ten Years As Obesity And Tooth Decay Spike 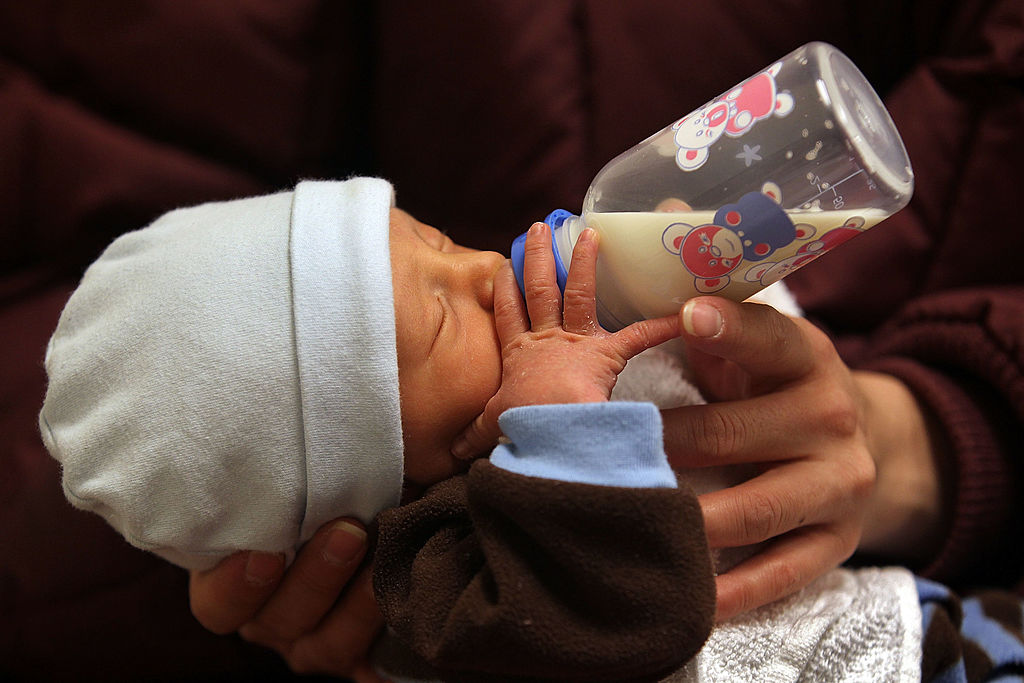 Diego Gomez drinks breast milk from a bottle during a newborn care class on February 23, 2010 in Aurora, Colorado. (Photo by John Moore/Getty Images)

Prescriptions for specialist infant formula have almost tripled in a decade, according to new research raising obesity and tooth decay fears due to the excess sugar they contain.

Rates are over ten times higher than what would be expected for the number of cases of milk allergies, according to a new study.

Babies are being wrongly diagnosed because of pressure from the industry, warn health experts.

Amounts soared 2.8-fold in England from 2007 to 2018 – with similar trends in other regions of the United Kingdom.

The findings are cause for concern, say an international team of experts. The formula products contain higher levels of sugar – which can fuel tooth decay and obesity.

The World Health Organization believes the phenomenon is behind the lessened numbers of breastfeeding among mothers when they return to work.

Human milk contains nutrients that protect babies against infections – and even Sudden Infant Death Syndrom (SIDS), which is also known as cot death. It also reduces their risk of heart disease later in life.

“Unnecessary specialized formula use may make a significant contribution to free sugars consumption in young children.”

The study was based on national prescription databases and is the most comprehensive of its kind.

Boyle said: “Most infants prescribed specialized formula do not have milk allergy, with up to 10-fold excess prescription.

In the UK, more than a quarter of under children under five are overweight or obese – rising to four in ten eleven-year-olds. Around one-in-four five-year-olds already have cavities.

Cow’s milk allergy affects up to one percent of under-twos. Specialized products have been developed as alternatives to formulas containing powdered cows’ milk.

Boyle said: “While specialized formula is reasonably well tolerated by most infants, and supports nutrition and growth, there are significant differences from standard formula or human breast milk.

“In specialized formula products, the lactose naturally present in breast milk or cow’s milk is partially or completely replaced by alternative carbohydrate sources, often free sugars such as glucose or sucrose.

“High free sugars intake is an important risk factor for obesity and dental decay and a major public health issue.

“Thus, it’s conceivable unnecessary use of specialized formula may have important public health consequences that have not been studied to date.”

Breast milk contains antibodies passed on from the mother – which boost a baby’s immune system.

There is also evidence that breastfed babies have higher IQs and are less at risk of obesity – because formula milk is higher in fat.

Breastfeeding is deemed beneficial for the mother too because it enables her to bond with the newborn.

It also enables her to lose weight, as nursing mothers burn up to 500 calories extra a day. Breastfeeding also reduces a woman’s risk of breast cancer.

Britain has some of the lowest breastfeeding rates in the world, with just one percent of mothers feeding their babies naturally for six months.

This is despite the British health watchdog National Institute for Health and Care Excellence (NICE) recommending that babies be breastfed exclusively for their first six months of life.

“In all three countries, there was a marked rise in volumes of specialized formula reimbursed by public health systems in the early 21st century in the absence of any concurrent evidence for a rise in milk allergy.

“This study provides evidence of increased and excessive prescription of specialized formula for managing cow’s milk allergy in formula-fed infants in three countries.

“The data show an important shift in early childhood nutrition which is likely to increase early years free sugars consumption and may promote the development of non-communicable diseases.”

The study was published in Clinical and Experimental Allergy.