Clare Harrison, 52, took her 12-year-old son Charlie and four of his friends to see the new movie on Saturday (July 2). 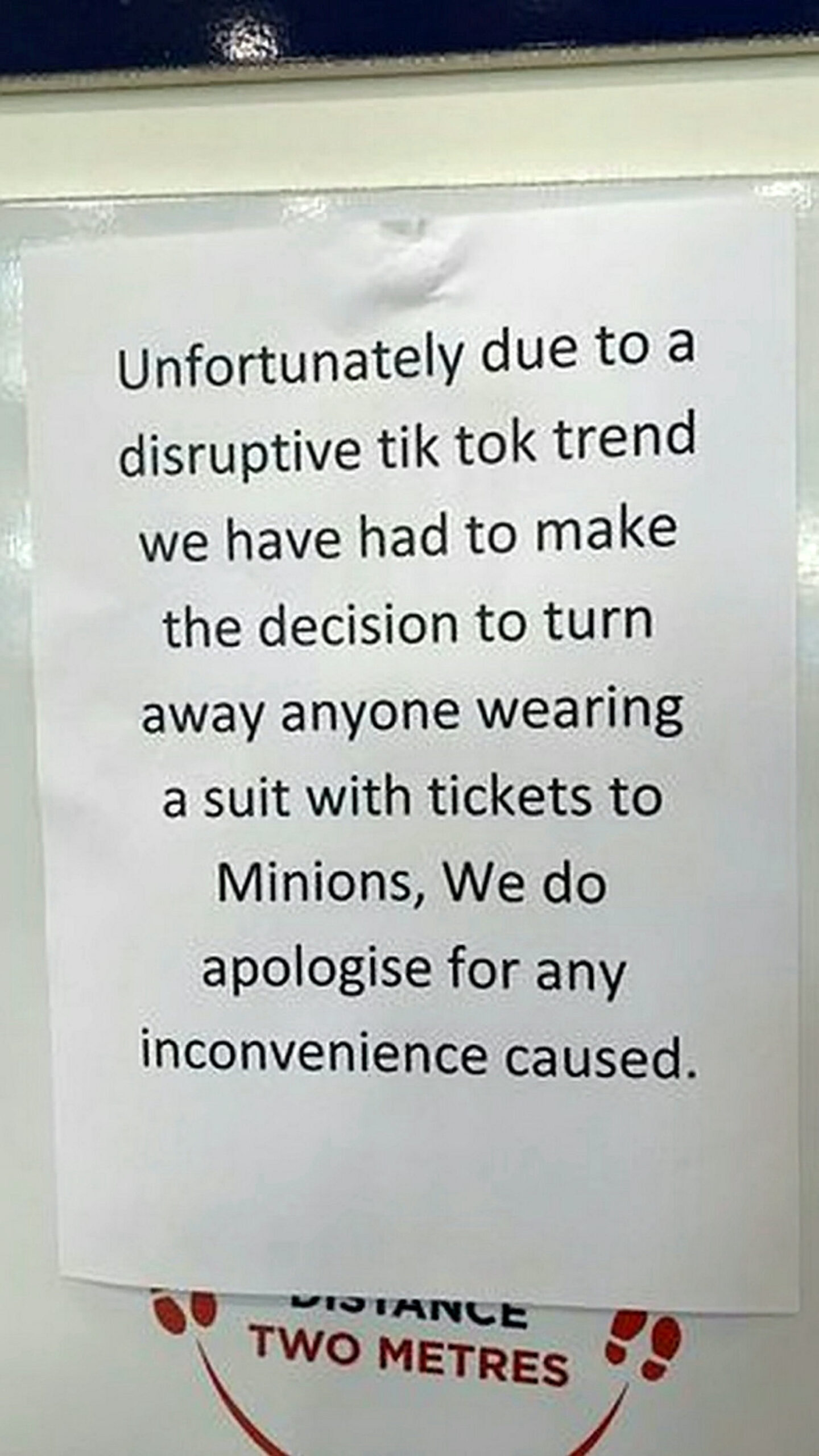 A furious mom has condemned her local cinema after it banned her son from seeing the new 'minions' film - because his friend was in a shirt. (Steve Chatterley, SWNS/Zenger)

A furious mother has condemned her local movie theater after it banned her son from seeing the new ‘Minions’ film – because his friend was wearing just a shirt instead of a suit.

Clare Harrison, 52, took her 12-year-old son Charlie and four of his friends to see the new movie on Saturday (July 2).

Despite only one of the boys wearing a shirt, the entire group of four were refused entry to the ODEON Cinema on James Street West in Bath, Somerset in southern England.

Some cinemas have imposed a dress code for viewings of ‘Minions: The Rise of Gru’ after a TikTok trend saw large groups of boys attend viewings in suits.

Movie studio Universal Pictures even endorsed the #gentleminions trend, saying on Twitter: “to everyone showing up to @Minions in suits: we see you and we love you.”

However, some groups have been disruptive in cinemas – with the only movie theater on Guernsey Island in the English Channel even cancelling all screenings of the film.

Children like Charlie just wanted to see the movie – but were turned away at the door by security without warning.

Clare described the whole experience as ‘bizarre,’ and said the ODEON cinema should have given parents notice about the ban without distressing the children.

She said: “I was just so cross. It’s ridiculous really. I dropped them off at the door of the cinema, and then Charlie rang me not long after saying that they’d been kicked out.

“He explained that they’d walked in and been told they couldn’t see the film because one of them was in a shirt.

“I’d not heard anything about this TikTok trend. He had mentioned that he wanted to wear a suit to me. He didn’t own one so he didn’t – though one friend wore a shirt.

“It was just stupid because there was no warning. There was no sign, even though you’d think they’d have one to cover their backs, nor anything on their website.”

ODEON Bath says that the ban on suits came after a group of boys disrupted a viewing on the evening of Friday, July 1, while wearing suits.

One parent alleged online that teens had been ‘clapping, fake crying and swearing’ during the viewing.

After being told to leave, Charlie and his friends tried to cover up their friend’s shirt with a jumper but were again denied because staff could see ‘a bit of shirt hanging out.’

Clare added: “The boys were only 11 to 12 years old. To not even give them a chance to come in was just stupid and unnecessary.

“A group of older lads turned up who weren’t in suits, and the security guards warned them that if they caused trouble they’d remove them.

“So I was just perplexed at why they didn’t just say the same to young kids in shirts like my son’s friend who just wanted to see the film and not cause trouble.

“If they’d been disruptive and called me to say they’d been kicked out, I wouldn’t have minded, but they weren’t even allowed in.”

After returning to the cinema Clare spoke to the manager.

Despite saying she would go and buy her son’s friend a t-shirt to wear, staff still said they wouldn’t let them attend the viewing because they’d ‘seen his face now’.

Sadly, Charlie wasn’t able to go and see the movie as a result – but Clare did manage to convince staff to install a sign informing parents about the ban.

Parents have since posted pictures of the sign online, with one writing on Facebook: “My youngest son was refused entry to ODEON Cinemas in Bath for wearing a shirt and tie.

“I guess they never felt to put it in their website at the point of sell, so that children would waste their money on the bus ticket.

Similar incidents have been reported across the UK.

An ODEON spokesperson responded to the incident saying: “Due to a small number of incidents in our cinemas over the weekend we have had to restrict access in some circumstances.”

The Vue cinema chain said it was still welcoming all customers to see the film, which had been “incredibly popular” over the opening weekend.

The Minions movie franchise follows reformed supervillain ‘Gru’ and his army of yellow henchmen, and kicked off with 2010 film Despicable Me.

The latest film tells Gru’s origin story as an 11-year-old, struggling to break into the super-villain business.