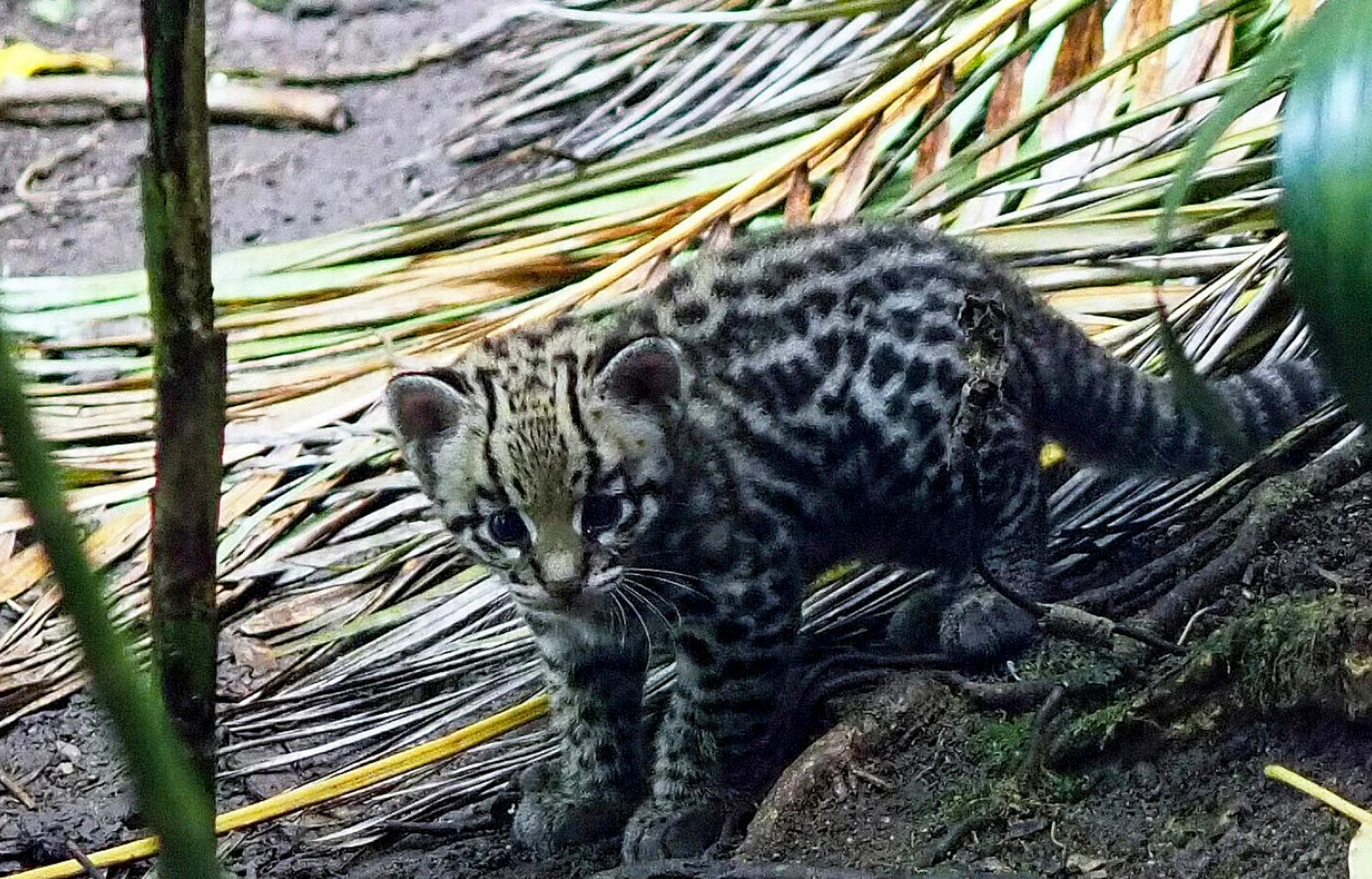 The adorable ocelot cub that took its first steps in Leipzig Zoo's rainforest in Germany, after it was born in May 2022. (Zoo Leipzig/Zenger)

This is the moment an adorable ocelot cub gets to grips with the climbing skills it will need when it grows up.

The weeks-old youngster was filmed by keepers as it explored its rainforest-like enclosure called Gondwana Land at Leipzig Zoo, Germany.

Proud mother ocelot Daphne, 14, leads her newborn around the territory but her cub just wants to play with the trees.

First, it gets to grips with attacking a fallen branch on the floor, and then it tries out its climbing skills up an angled tree trunk.

In the wild, ocelots are good climbers and often take their prey up to the tree canopy to avoid being ambushed.

But the baby big cat managed just a few steps before it came tumbling back down to earth.

Keepers say the as-yet-unnamed cub was born in late May at the zoo.

It is Daphne’s ninth cub with a 12-year-old male called Pinchu. The zoo said in a statement: “It is already the ninth cub of this pair that has been successfully raised and lovingly cared for.

“So far, Daphne and her offspring have mainly stayed in the back area of &ZeroWidthSpace;&ZeroWidthSpace;the facility, but for the past few days she has been increasingly visiting the outdoor enclosure. Her calf, which is about a month old, follows her on these forays with a great deal of curiosity and a lively attitude.”

Neither keepers nor the zoo veterinarian have examined the newborn to avoid disrupting mom and cub bonds.

The ocelot (Leopardus pardalis) is a medium-sized spotted wild cat that reaches 15.7 to 19.7 inches at the shoulders and weighs between 17.6 and 34.2 lbs.

It was first described by Swedish zoologist Carl Linnaeus in 1758.

Ocelots live in a large variety of habitats ranging from tropical forests to marshes and savanna grasslands.

Mostly nocturnal, ocelots spend their days in trees or thick vegetation. They are agile climbers and strong swimmers.

Ocelots are native to the southwestern United States, Mexico, Central and South America, and to the Caribbean islands of Trinidad and Margarita.

However, they are threatened by habitat destruction and hunting.

Leipzig Zoo – which first opened in 1878 – is one of the most tradition-rich zoos in Germany.

Situated northeast of the city center, it features around 850 species on 26 hectares.

The Gondwana Land enclosure – where its ocelots are living – comprises 3.8 acres, which makes it the second-largest indoor rainforest enclosure in the world.