After the dramatic rescue, teachers faced furious criticism for leading the children into danger. 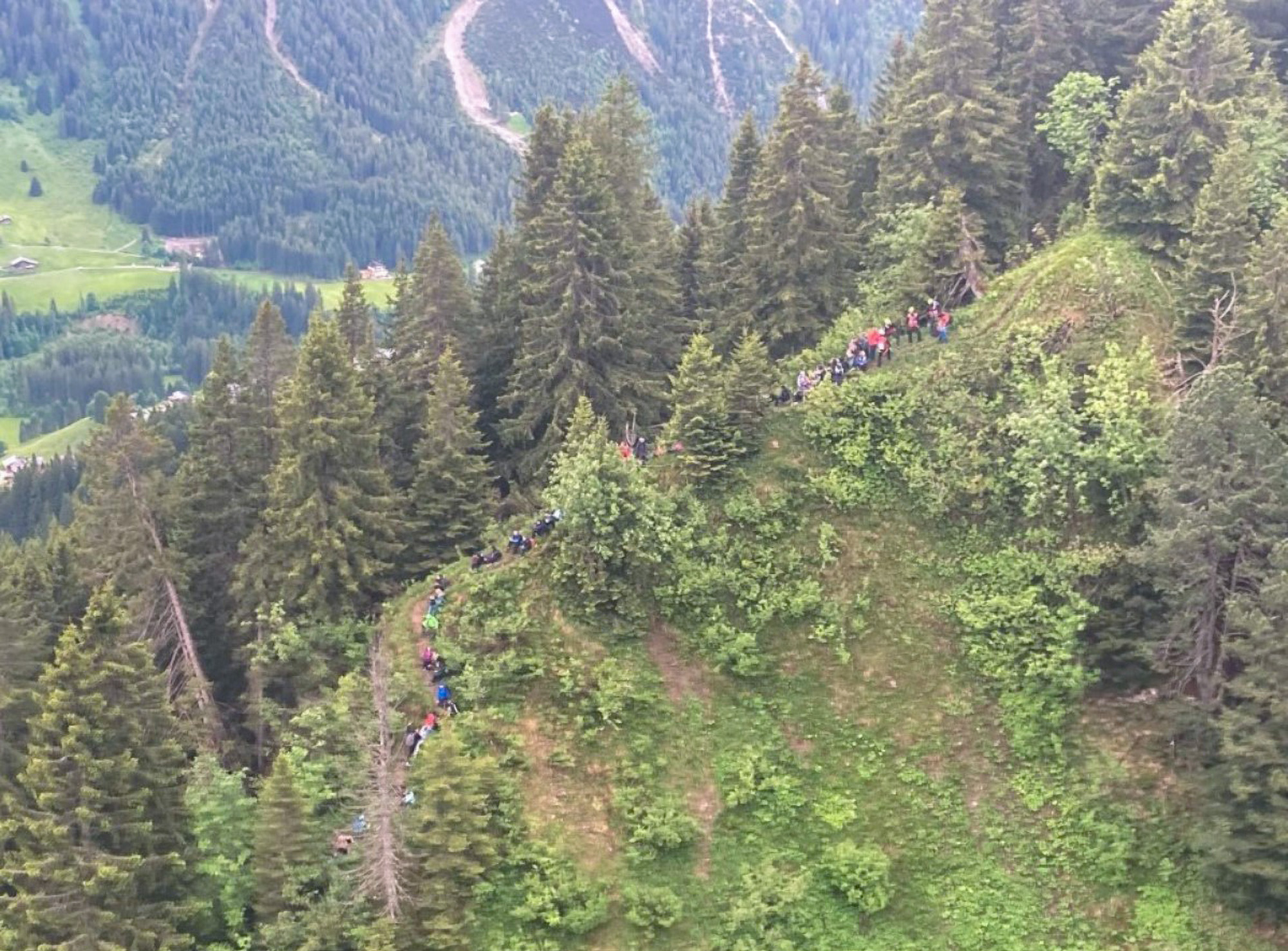 99 students and eight teachers were rescued on 7th of June 2022 from mountain distress in the Austrian Alps. (Bergrettung Riezlern/Zenger).

A school has received a $13,600 bill after 99 terrified students had to be airlifted when they were led up a deadly mountain path by hapless teachers.

The youngsters were rescued by helicopter in a howling storm after teachers guiding their group took them up a dangerous Alpine pass.

The students- aged between 12 and 14 – and eight adults had become trapped on the Alpine track in Hirschegg on the Austrian-German border.

After the dramatic rescue, teachers faced furious criticism for leading the children into danger.

Now German media have reported that the rescue bill will be paid by education authorities in the state of Rhineland-Palatinate.

A spokesperson admitted: “The Ministry of Education will check the bill and – unless the bill raises any fundamental doubts – will of course pay it.”

But the teachers themselves could still be on the hook for some of the bill if they are found to have been grossly negligent.

The public prosecutor’s office in the western Austrian town of Feldkirch, Vorarlberg state, is investigating the mountain drama.

The teacher – not named under local privacy laws – who picked the mountain trail from an internet post could even reportedly face prison.

Martin Burger, manager of the Vorarlberg mountain rescue service, reportedly put the size of the bill down to the complicated air rescue.

A police helicopter had to fly for three hours and a mountain rescue helicopter remained airborne for an hour and a half.

During the rescue, the helicopters made 33 separate trips to shuttle the youngsters to safety.

Rescuers – including 50 mountain experts – also worked tirelessly on the ground.

The trail is, in fact, so dangerous that it was removed from official tourist guides.

A teacher only called the police for help when the students- aged between 12 and 14 – and eight adults became trapped on the Alpine track in Hirschegg on the Austrian-German border.

The horrified group leader had realized that the exhausted children could go neither forward nor back to their hotel down in the valley.

Two pupils had already suffered injuries as they fell over on the slippery and rocky trail.

“Some trails that are listed and rated on the different websites even don’t consist anymore.”

Drexel later warned: “Naively trusting what you read somewhere online can get you in unpleasant situations.”

Several pupils reportedly suffered from hypothermia and some needed counseling from local psychologists.

Local police filed a report to the state prosecution in Feldkirch.

There have been numerous cases of careless holidaymakers airlifted to safety after opting for challenging hiking paths wearing just flip-flops or sneakers.

Local rescue institutions warn of the dangers of sudden changes to weather conditions such as sudden downpours, thunderstorms and intense snowfall throughout the year.

Schwartz added that many teachers would abstain from booking a local guide due to their limited budgets.

Vorarlberg is one of Austria’s nine states. The small mountainous region is situated in the very west of the Central European country. It shares borders with Switzerland, Liechtenstein and Germany.

Vorarlberg is one of Austria’s top destinations for skiing enthusiasts from all over the world as well as for hikers and mountain cycling fans during summertime.