Dean Barber, 32, managed to get tickets for Adele’s concert at Hyde Park, London, on Saturday, July 2. 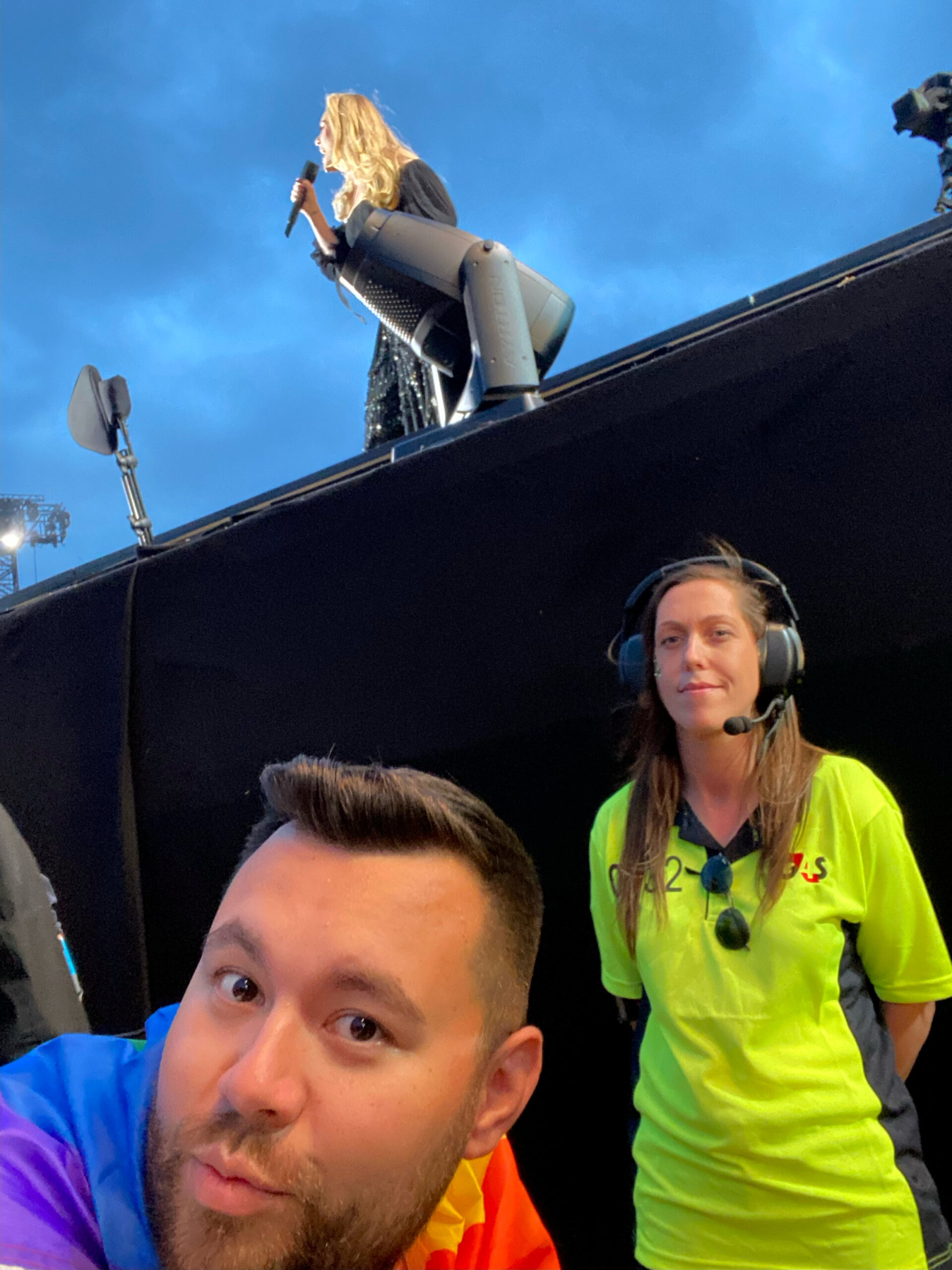 An Adele fan has told how he bagged VIP seats at her concert - by letting the singer borrow his $9 Pride flag to take on stage. (Dean Barber, SWNS/Zenger)

An English music fan has told how he bagged VIP seats at singer Adele’s concert – by letting her borrow his nine-dollar Gay Pride flag to take on stage.

Dean Barber, 32, managed to get tickets for Adele’s concert at Hyde Park, London, on Saturday, July 2, and took the rainbow banner to the event.

Barber, a primary school teacher, was then left shocked when he was asked if Adele could borrow the flag on stage to use as part of her performance.

In return for the favor, Adele invited Dean and his pal to go and enjoy the concert from the comfort of the VIP area – the best view in the house.

Dean has hailed her a a “true LGBT ally” for her support of the community at the sold-out venue with a capacity of 65,000.

Dean, from Hornchurch, Essex, in southeast England, said: “When we were asked if Adele could borrow a flag for the stage, we couldn’t believe it.

“We gave her the spare and were escorted to VIP – I kept thinking ‘is this real?’. I couldn’t believe it.

“After a couple of songs, she called to ask for Jack and Dean – my friend and I – and pulled us right to the front.

“When she called us over she said ‘I needed the flag, you’ll find out why later’ – and later on she came out wearing the flag.

“It was just so mind-blowing and crazy – I’m still processing it because you don’t ever expect that to happen.

“To have someone on that level be so outwardly an ally is huge.”

Dean picked up two flags from Holborn station for approximately 8 English pounds or $9 each shortly before arriving at the concert, as it was also London Pride that weekend.

He said moments after arriving, he and pal Jack were whisked aside by someone from Adele’s team, asking to borrow one of their flags for Adele to use during her performance.

During the performance, she had the rainbow flag draped over her shoulders before later waving it around in support of the LGBT community.

All of this occurred while Dean watched from the very front row in the VIP area – courtesy of Adele herself.

Looking back on the once-in-a-lifetime experience, Dean said her action is more than just doing something nice for an excited fan.

He said: “It was a huge moment to have an artist using their platform like this to support the queer community.

“When it’s been a hard time for the community in so many places, it’s incredible for someone on that level to show support.

“When it went viral on social media, I expected some homophobia but everyone has just been so lovely.

“I guess that’s just the power of Adele – she is a true ally.”