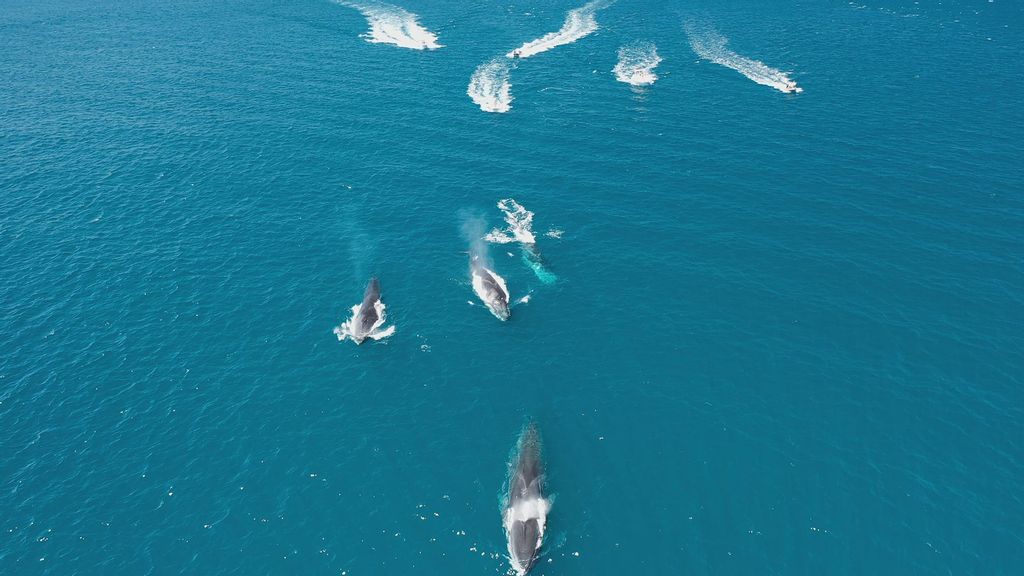 Boats chasing and harassing whales off the coast of Denia, in the Costa Blanca area, Spain, between June 24 and 26, 2022.  (Edmaktub/Zenger)

The footage was filmed by members of the NGO Edmaktub, dedicated to the scientific study of whales and the aquatic environment.

It shows high-powered tourist speedboats racing up to the pod, sometimes shadowing them from just a few feet away.

The tourist boats were filmed apparently chasing the fin whales (Balaenoptera physalus) off the Costa Blanca in south-eastern Spain over the weekend of June 24 to 26.

Edmaktub said the situation is very dangerous for whales because they can easily become disorientated when they are forced to change direction to avoid hitting a chasing vessel.

The NGO said researchers were working off the coast of Denia in Alicante Province as part of the project Cabo Rorcual, in cooperation with the Valencia Polytechnic University, to monitor the whales’ migration from the Catalan coast in north-eastern Spain.

Edmaktub said the situation is very common at this time of the year.

Association president Eduard Degollada, 56, told Zenger News that it is not uncommon to see boats approaching the marine animals so tourists can take close-up photos.

He said: “The boats approach them a lot and the whales are forced to change direction and speed so they end up altering their natural rhythm.

“One of them even has a large scar in the dorsal area that probably happened a few years ago.”

Degollada said the whales usually feed off the Catalan coast from spring until June or July and then migrate south, occasionally crossing the Strait of Gibraltar.

According to Degollada, the fin whales also suffer from excess noise caused by the tourist boats in the area.

He told Zenger News that the noise “drowns out what they can listen to and forces them to change direction and separate from each other, possibly never finding each other again.

“If a calf is separated from its mom, it could find itself heading to the coast, which is certain death for them.

“If they end up stranded, they cannot breathe properly and end up suffocating.”

He added: “A collision with a boat may not cause death, but the continued stress can make it happen.”

Degollada told Zenger News that whales need to be given “a distance of around 300 meters” by law, adding that fines of around 200,000 euros ($241, 660) apply for anyone caught getting too close.

However, he said many people are not aware of the laws in place and Edmaktub works to raise awareness of the situation in the local area.

He also believes that the local authorities need to monitor the coast more closely to prevent whales from being harassed by vessel owners similar to how they are apparently chased in the footage.