The adorable encounter was filmed by a guide named Ebenezer Rhode, 29, on June 18. 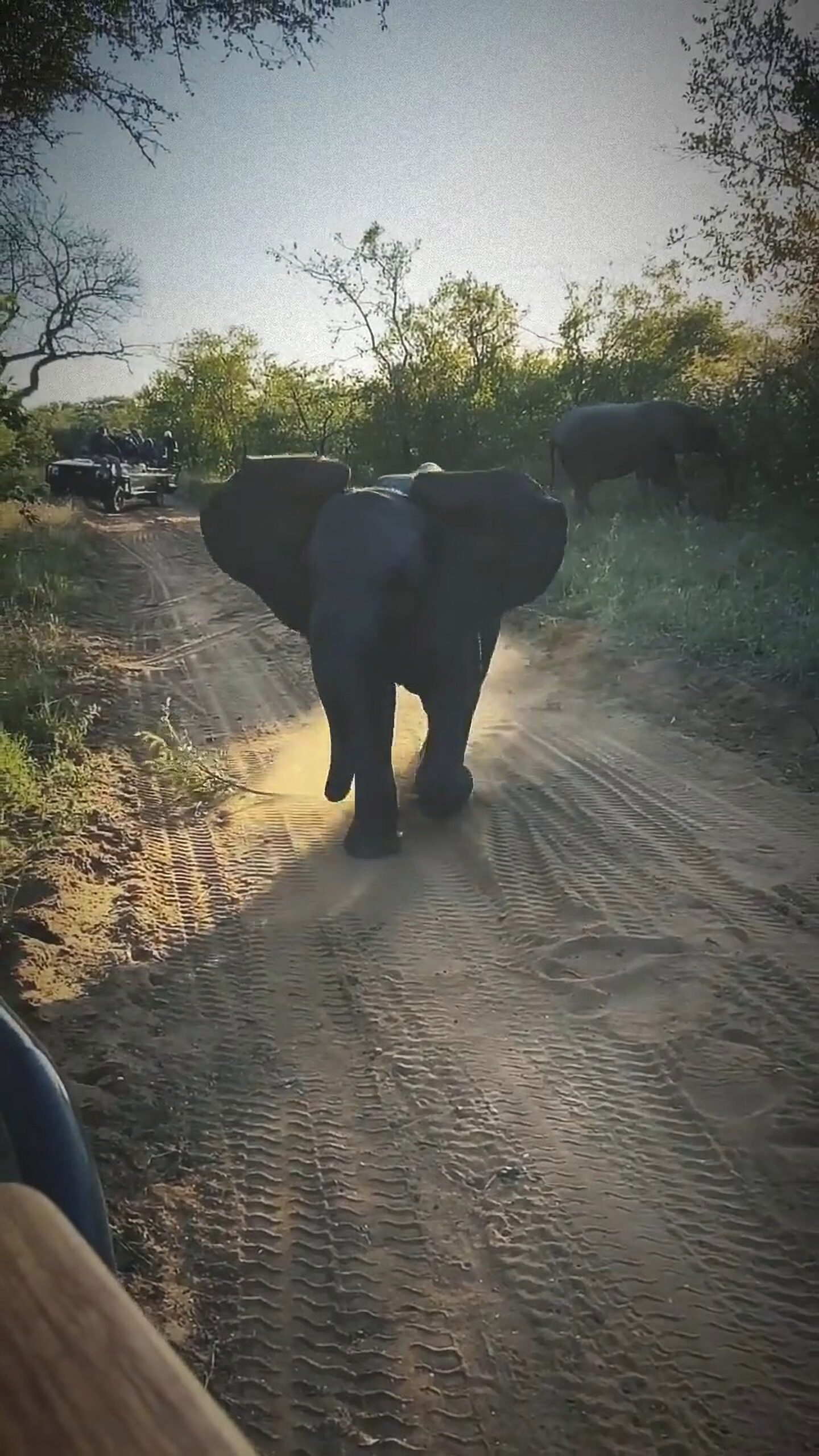 This is the adorable moment two elephant calves try out their tusker skills to confront a tourist safari at a South African game reserve.

Delighted holidaymakers at the Kapama Private Game Reserve, in the Kruger National Park, in Limpopo Province, in north-eastern South Africa, watched from their jeeps as the pair confronted them in the bush.

The first elephant calf can be seen in the footage running up with its trunk raised and its ears spread wide, which is a classic elephant warning sign for a charge. But it stops short of charging the vehicle.

Then a second baby elephant can be seen in the footage running onto the track ears flapping and trunk tooting to support its herd member. It too stops short of charging the safari vehicle.

And after a few moments, the playful pair’s nerve seemed to fade and they turned tail and ran over to a much larger elephant who appears to be their mum.

The adorable encounter was filmed by a guide named Ebenezer Rhode, 29, on June 18.

He posted the clip on his ‘Ranger Ebz’ Instagram page last week where it has been widely viewed by wowed wildlife lovers.

Ebenezer – who comes from Mossel Bay in the South African province of Western Cape – is a “field guide at Kapama Private Game Reserve.”

He shared the clip with the message: “Very curious young elephants giving us a lot of fun on a recent safari for first-time safari-goers.”

Ebenezer told Zenger News in an exclusive interview: “I’ve been actively guiding for about seven years, but I’ve been on a game reserve since October 2012.”

He explained that no tourists were at risk of being hurt by the elephant herd in his video.

He added: “At no stage were we in any danger because we were observing the young ones, but we also remained focused on the adults in the group.”

Ebenezer also said: “There was enough space for us so we were not cornered in by the elephants at all.

“With elephants, the young ones are often playful and mock charge the vehicles to build confidence.”

Ebenezer said: “Also, they are not that used to cars so it takes them a little time to get used to the vehicles, but the animals’ behavior often shows you what they want to do.”