"He was a very loud, friendly, happy man and it was just a shock – I didn’t think this sort of thing happened but it does."
By Darko Manevski July 6, 2022
Facebook
Twitter
Linkedin
Email 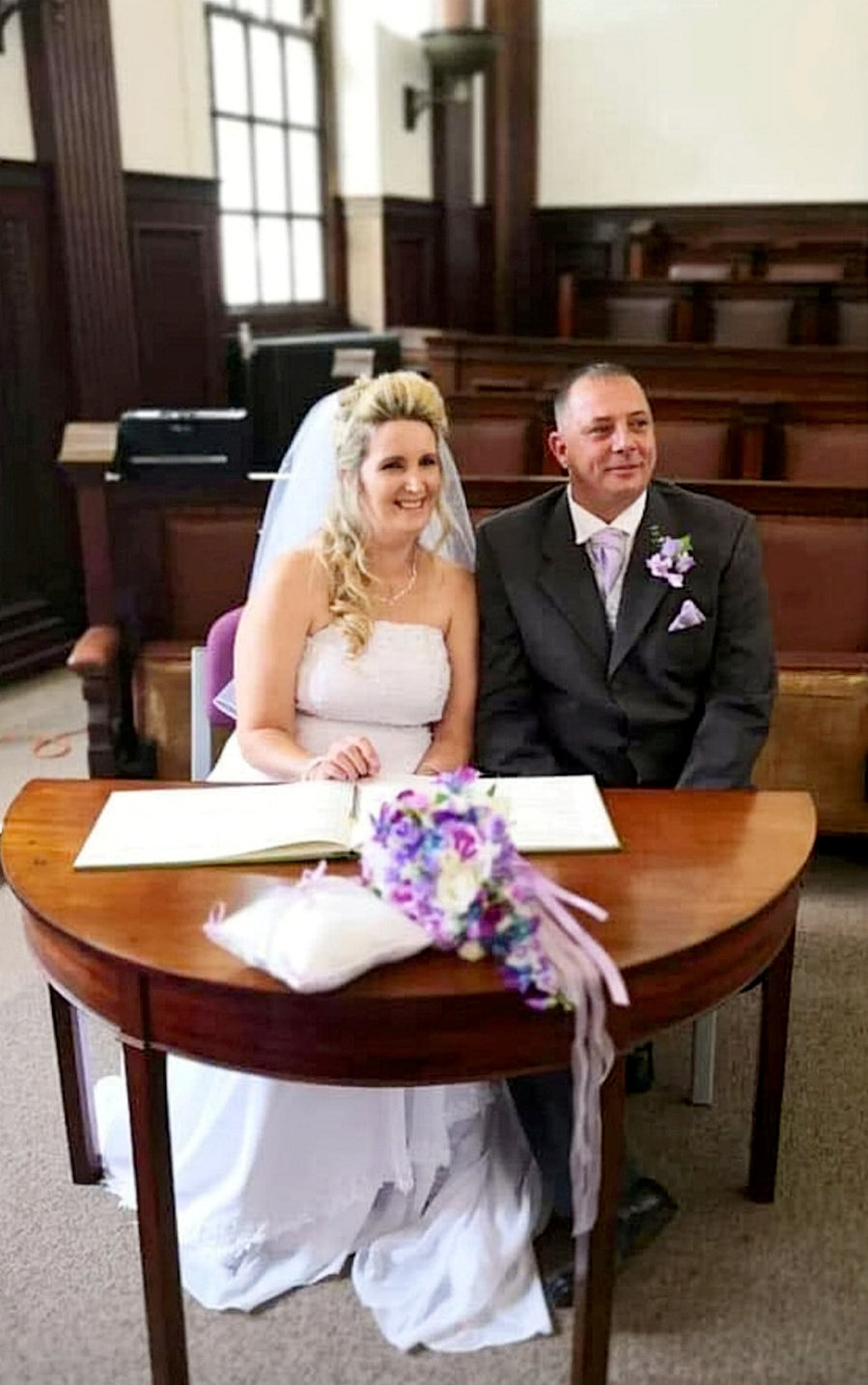 A widow and mum-of-three has spoken out to share her heart-breaking story about how she was married to the love of her life for just four months before he died following a bout of the flu. (Leanne Slaymaker, SWNS/Zenger)

A widow and mother-of-three has spoken out to share her heart-breaking story about how she was married to the love of her life for just four months before he died following a bout of the flu.

Leanne Slaymaker, 40, from Portishead, Somerset, in southern England, had been married to her partner Tom Slaymaker for just four months when he died following a brief illness – and says they had been laughing and joking just ten minutes before he collapsed.

The family have continued to live in the house where Tom died and Leanne says the council haven’t helped her find a new place to live to help them move on from what happened.

Now, she is sharing her story to help others who have tragically and suddenly lost a partner to help them see that there is a way through the grief.

“We had known each other for about five to six years by the time he passed but had only been married for four months,” said Leanne.

“He was a very loud, friendly, happy man and it was just a shock – I didn’t think this sort of thing happened but it does.

“I waited my whole life to be married and found true love for four months – and then my husband died suddenly at home in front of me.”

The newlyweds had known each other for around five years when they got married, after Tom proposed over the Christmas period in 2017.

The couple were already aware of each other and became closer due to the fact they were living on the same street as neighbors – after a year of getting to know each other they entered into a relationship together.

Tom would help Leanne with her car, and one night the duo happened to bump into each other in the pub – and their relationship blossomed from there.

The couple dated for a year before Tom proposed to Leanne in front of her children in 2017 and within another year they were married, tying the knot in August 2018.

During December 2018, the newlyweds both came down with the flu and after two weeks of illness Leanne took Tom to see a doctor.

The doctor warned that his heart rate was a ‘bit fast’ but said it was nothing to worry about and prescribed Tom steroids to help.

On the Monday of January 6, 2019, the pair woke up as usual and were laughing and joking together in the kitchen – when Tom suddenly collapsed and stopped breathing.

Leanne swiftly called for an ambulance and began CPR on her husband until the paramedics arrived, however once they had reached the scene and performed CPR for a further 50 minutes, they broke the tragic news to her that Tom had died.

Leanne said: “We lived on the same street and were neighbors for a year – we just always chatted and he always helped out if I had car trouble, and then we happened to be in the same pub one night and it went from there.

“After we’d known each other for a year we got engaged, he proposed at Christmas time in 2017 in front of the kids so they were part of it and then he took me away to Minehead for the weekend and did it properly with the ring and everything.

“We were married in August 2018 – we only had a little town hall registry office wedding and then we had a reception at the Bridge Inn in Yatton.

“Everyone just loved it, it’s not always about what you spend, it’s about making a good day for each other.

“Come December, we both had the flu and didn’t think much of it went, it went on for about two weeks so I took him to the doctor who said his heart was a bit fast but it was nothing to worry about and prescribed him some steroids.

“We got up on Sunday January 6 and were laughing and joking ten minutes before – the next thing he’s collapsed and while I was on the phone to the paramedics, he stopped breathing.

“I did CPR until the paramedics got here, there were eight of them in total and they all ended up doing CPR – after fifty minutes they said they were sorry but he was gone.

“They showed me a scan of his heart and said there was no blood going to it.

“I obviously wanted to find out what caused the death – it came back that he had bronchitis, pneumonia and an enlarged heart, and with those three things going on his organs just went down.

“There was no history in the family – Tom was a bigger guy who smoked and he did drink but before he died he was on a diet, he’d stopped smoking and drinking and then he just collapsed and died in the same house I’m in now.

“The council won’t help me and for me and my kids it’s a constant reminder every day, in their eyes Tom was their dad.

“I spent two and a half years not wanting to live or move on but you have to for the kids, it’s taken us a long time but they’re starting to live – especially my youngest daughter who suffered the most.

“We’ve just been talking and opening up about it and talking to one another as a family, every anniversary we always light some candles – he was a big part of our lives and he’s never forgotten.

“Even if it helps somebody to know that as much as you feel like there is no way out, there is – the sun will shine again and you can carry on with life and carry them with you.

“When you’re in that you don’t think there is a way out, but there is.”