“For more than four months, the inhabitants of Lysychansk waited for the arrival of Russian soldiers. And, finally, it happened.”
By Joseph Golder July 6, 2022
Facebook
Twitter
Linkedin
Email 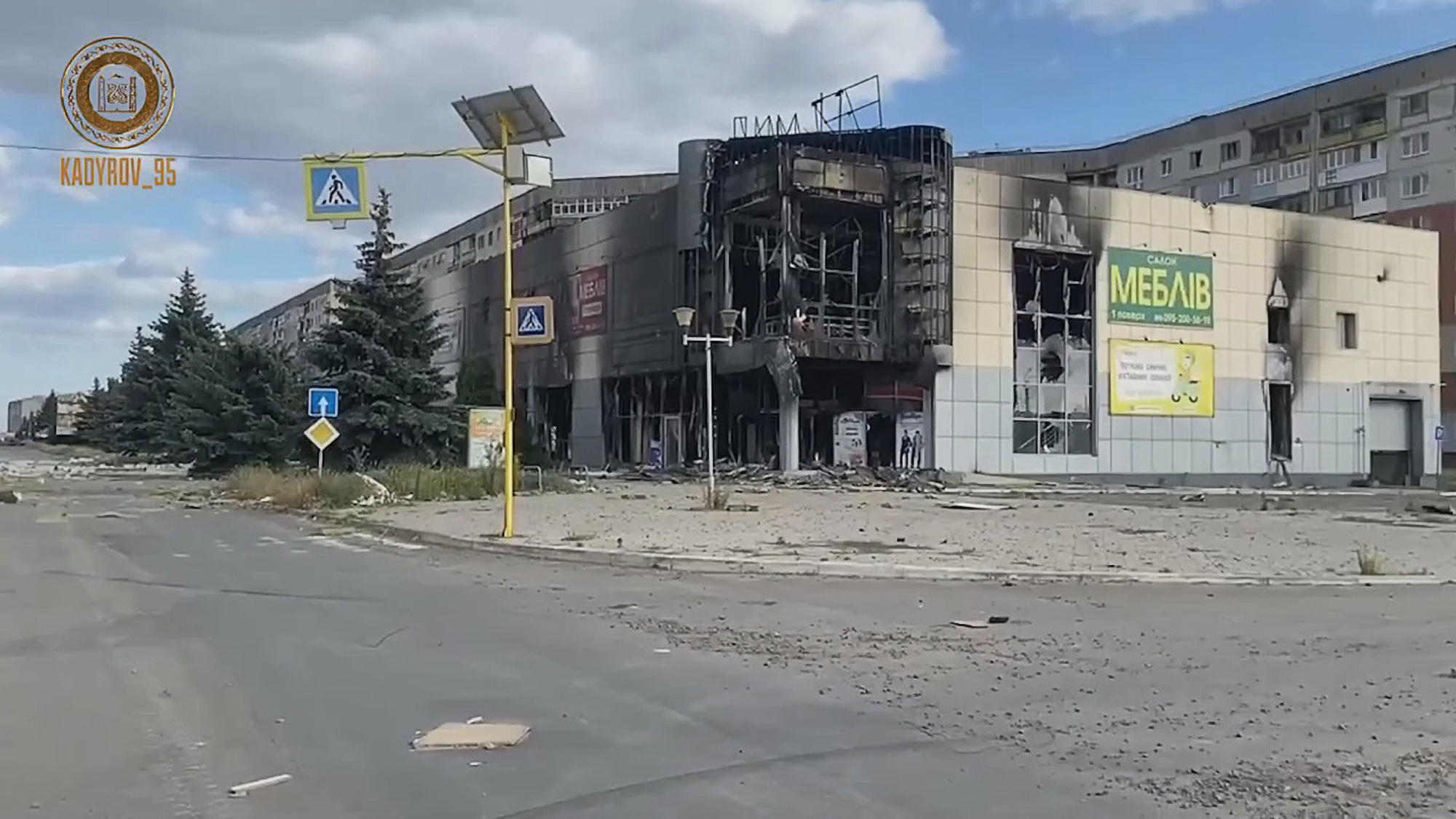 Chechen leader Ramzan Kadyrov showed the city of Lysychansk, now under the control of Russian and pro-Russian forces.

Lysychansk appears to be with its streets largely deserted, its buildings heavily bombed, having been supposedly “liberated” by the invading forces.

Soldiers can be seen erecting a pontoon bridge across a river. The “liberators'” flags can be seen being flown from buildings. And an aerial view reveals some of the damage to the city.

Kadyrov claimed on Sunday, July 3, that the city had been “liberated”, adding: “For more than four months, the inhabitants of Lysychansk waited for the arrival of Russian soldiers. And now, finally, it happened. The local population shares their impressions and emotions with great pleasure.

“Seeing a Russian fighter is a great joy for them, because for a long time they were under the gun of Ukrainian nationalists. Moreover, they were used as human shields. The nationalists deliberately located near residential buildings in order to blame Russia for all the troubles that had happened.

“Retreating, the criminals caused maximum damage to the infrastructure of the city. Based on this, one can understand that the Kyiv regime cares little about the civilian population. Fortunately, we are masters not only in military affairs, but also in the restoration of urban infrastructure. We will restore everything as quickly as we took this city. These streets will soon bloom with all colours, I have no doubt about that.

“Our brave fighters are fighting this fight primarily for the sake of people who have been bullied for a long time. Lysychansk is now liberated, which means that the crimes of the ‘Ukronazis’ are finished once and for all. Residents can take a deep breath of the free air of the Luhansk People’s Republic” (LPR).

The break-away, so-called People’s Republic of Luhansk (LPR), meanwhile, also claimed, on July 3: “The units of the People’s Militia of the LPR, together with the military personnel of the 8th Combined Arms Army of the Armed Forces of the Russian Federation and other units of the allied forces, liberated the city of Lysychansk and the surrounding settlements, which completed the liberation of the Luhansk People’s Republic from Ukrainian nationalists.

“The people’s militia of the LPR will continue the offensive until it liberates the territory from Ukrainian Nazism.

“In addition, the forces of the [People’s Militia] of the LPR, together with volunteers and humanitarian organizations, continue to provide residents of the liberated territories with all the necessary assistance.”

Meanwhile, the General Staff of the Armed Forces of Ukraine said on Sunday (in English): “After heavy fighting for Lysychansk, the Defense Forces of Ukraine were forced to withdraw from their occupied positions and lines.

“In the conditions of the multiple superiority of the Russian occupying forces in artillery, aviation, MLRS [Multiple Launch Rocket Systems], ammunition and personnel, the continuation of the defense of the city would lead to fatal consequences. In order to preserve the lives of Ukrainian defenders, a decision was made to withdraw.

We continue the fight. Unfortunately, steel will and patriotism are not enough for success – material and technical resources are needed.

“The defenders of Luhansk oblast and other oblasts of our country heroically perform their civil and military duties.

“We will be back and we will definitely win!”

Russia invaded Ukraine on February 24 in what the Kremlin is calling a “special military operation.” July 4 marks the 131st day of the invasion.

Russian state media has claimed that two more Brits captured by Russian troops in Ukraine have been charged with mercenary activities.

They have been named as Dylan Healy, a chef who had been volunteering as an aid worker, and Andrew Hill, who was shown by Russia in military uniform.

The European Court of Human Rights intervened, demanding that the sentences not to be carried out, but this was rejected by Russia, which declared that it would not be implementing the court’s decisions anymore and that the decision to execute the men lies with the separatist pro-Russian, so-called Donetsk People’s Republic, which lies in a Ukrainian region bordering Russia.