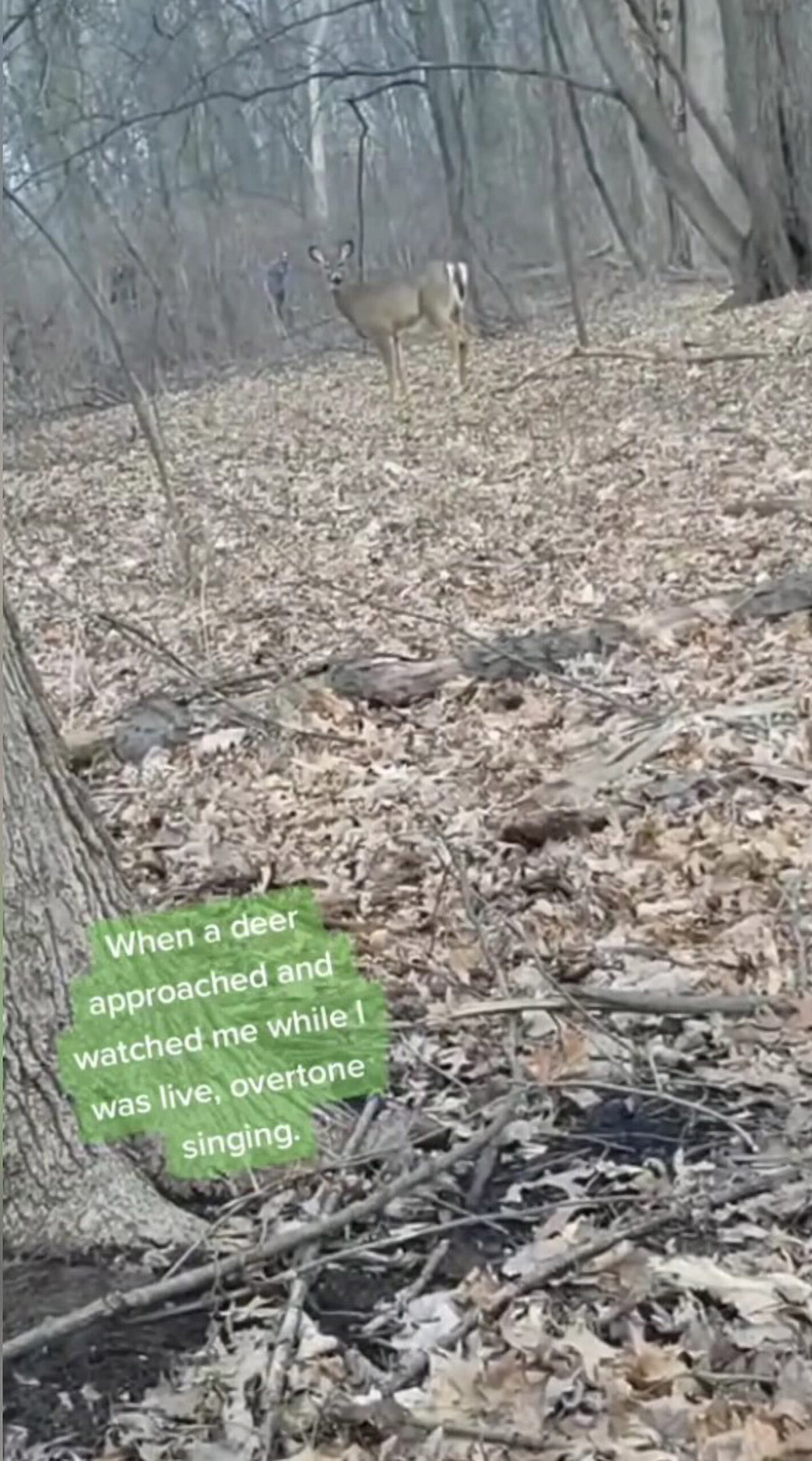 Terence MG Leano, 26, who lives in Windsor, Ontario in Canada filmed two unidentified creatures and a deer which appeared in the background while he was singing. (@throatsingking/Zenger)

A traditional throat singer has shown how his amazing vocal talents can captivate wildlife and draw in spooky woodland spirits.

TikTok presence Terence MG Leano, 26 – known as ‘Throat Sing King’ – had set out to see if his ancient style of singing could charm local deer.

But Terence – from Windsor, Ontario province, Canada – seemed to have attracted some spook spiritual watchers too, according to some of the 1.7 million who have viewed his clip.

Terence, who calls himself a Visionary Artist, shared the clip with the message: “I was overtone singing live today when this happened.”

In his video, as soon as he starts his other-worldly singing, a deer stops stock still, apparently captivated by the sound.

Then, say some watchers, other, more mysterious figures appear, lurking in the dense woodlands.

Terence said he was live-streaming when he filmed the deer and inadvertently captured the two strange figures as well.

The TikToker, whose bio reads – ‘Not the king of throat singing, just a king who happens to throat sing- accompanied the footage with the caption: “When a deer approached and watched me while I was live, overtone singing.”

In the video, Terence films a deer watching him in the distance while explaining: “Pretty sure he was looking for where the sound was coming from, but I stopped and started talking, and I was confused.”

At the same time, a dark figure is seen walking behind a tree near the curious deer.

Terence starts his overtone singing again and zooms in on the deer, apparently wondering where the strange noise is coming from.

Behind the deer, a spindly creature is seen peering from behind a tree apparently also investigating the strange sound.

The mysterious creature then seems to duck back behind the tree as the video comes to an end.

Netizen ‘Essicasarmy’ commented: “Sooooo creeeeepy! I watched it twice. The second time I focused in on the black figure and the camouflaged figure with the bald head bending over.”

TikTok user ‘Baileyyyy’ said: “There’s a skinwalker (a type of harmful witch in Navajo culture) behind that deer dude.”

Windsor is the traditional home of the Huron, Odawa, Potawatomi and Iroquois First Nations.

Terence told Zenger News: “I live in a small city in Canada, directly across from Detroit, Michigan, called Windsor, Ontario.

“I have been always been passionate when it comes to art, whether it is drawing, painting, singing, etc.”

He added: “Painting is something that I consider to be a new challenge whereas drawing is like breathing for me.

“Painting is more of a challenge. I finished my first ever oil painting last August.”