The footage was obtained from the Commander-in-Chief of the Armed Forces of Ukraine, Valery Zaluzhny, 48, on Saturday, 2nd July. 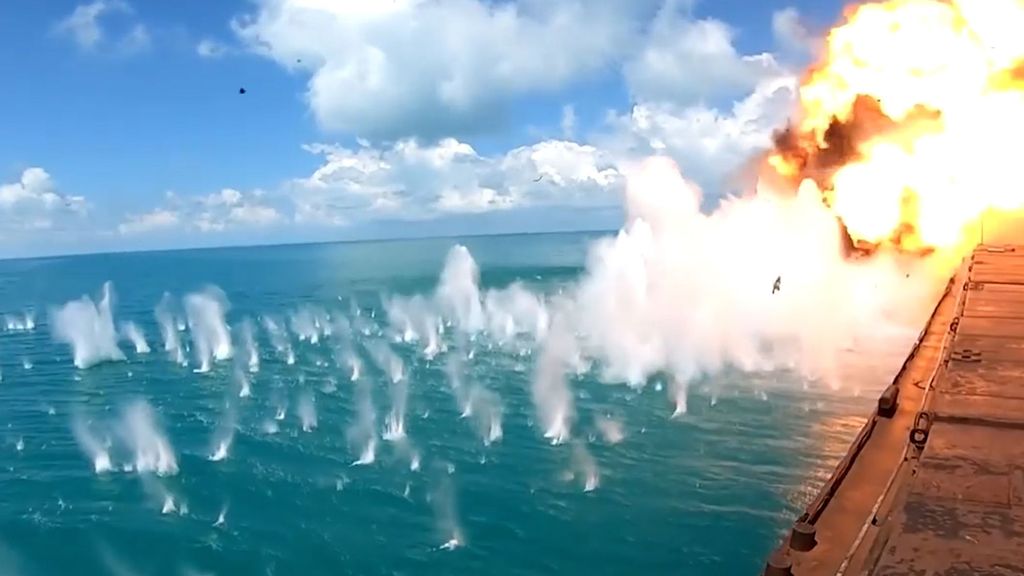 The Armed Forces destroyed the remains of Russian equipment, weapons, and property on Snake Island in Ukraine. (@CinCAFU/Zenger)

Ukrainian forces destroyed the remains of Russian military equipment on Snake Island after they forced the invaders to abandon the area.

Ukrainian fighter jets and a drone belonging to the Ukrainian Navy targeted and destroyed Russian military equipment on the island.

The footage was obtained from the Commander-in-Chief of the Armed Forces of Ukraine, Valery Zaluzhny, 48, on Saturday, 2nd July, along with a statement saying: “With yesterday’s airstrikes, the Russians tried to destroy their equipment, weapons and property on Snake Island. However, as is tradition, they did not cope with the task.

“We ‘helped’ the invaders to finally evacuate the remnants of their garrison from our island.
It no longer smells of ‘Russian spirit’ there.”

The footage and statement were also relayed by the Office of Strategic Communications (StratCom) of the Armed Forces of Ukraine.

“I wish you every success in your future endeavors, prosperity, much happiness and robust health.
I highly appreciate assistance and contribution provided by the United States of America to Ukraine during this hard time. We value your nation as a strategic partner who shares common principles – protecting innocent people, sovereign territory, democracy, is what really matters.

“May the years to come yield further cooperation and reciprocity between our countries and our Armed Forces.”

Snake Island, also known as Zmiinyi Island, is part of Ukraine and is located in the Black Sea.

But Andriy Yermak, 50, the Head of the Presidential Administration of Ukraine, derided the Russian statement, saying: “All this is a complete fake. First, the Ukrainian Armed Forces drove the Russians out of Snake Island. Secondly, the Russians are shelling warehouses with our grain. In the morning, a warehouse in the Dnipropetrovsk region was fired upon. Russia continues to provoke a food crisis and lie. They are still blocking our ports and destroying grain.

Russia invaded Ukraine on February 24 in what the Kremlin is calling a “special military operation”. July 4 marks the 131st day of the invasion.