The footage was obtained from the 10th Mountain Assault Brigade of the Ukrainian Ground Forces on Sunday, July 3. 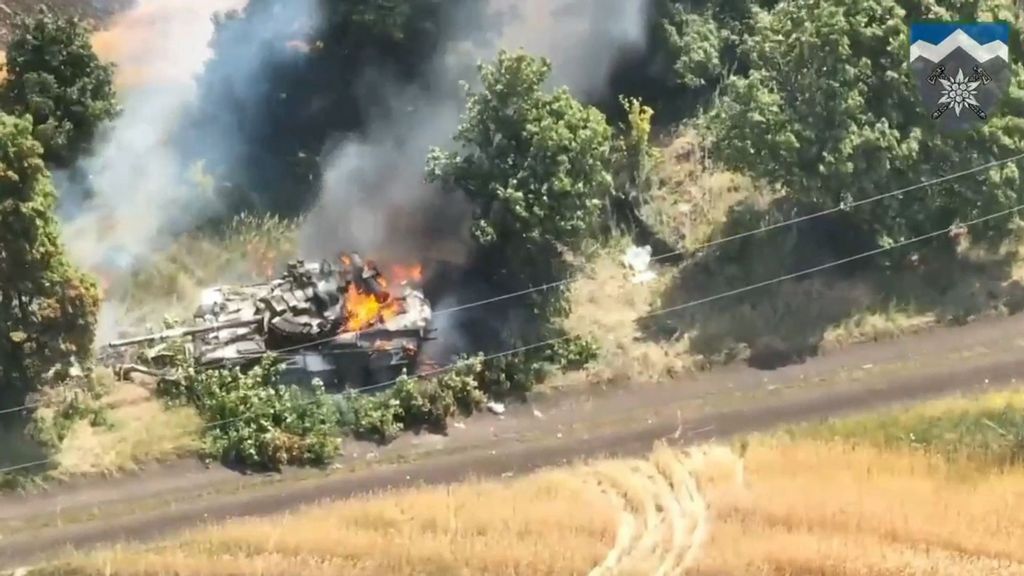 The fighters of the 10th Mountain Assault Brigade shared that they destroyed two Russian tanks on July 3, 2022 in Ukraine. (@10brygada/Zenger).

A tank which appears to be a Russian one takes cover among some trees somewhere in Ukraine, as can be seen from these images.

Then a drone appears to be flying towards the tank before smoke can be seen rising into the air after it was apparently hit.

A projectile then seems to hit the forested area, felling a tree. There are other explosions before a tank can be seen reversing out of the wooded area while billowing smoke after apparently being hit. It then appears to be hit again, with a large explosion causing smoke to rise from the tank, which is now on fire.

It can be seen continuing to move before the footage cuts and shows what appears to be a second tank burning among some trees after having apparently been hit by Ukrainian ordnance as the footage ends.

The footage was obtained from the 10th Mountain Assault Brigade of the Ukrainian Ground Forces on Sunday, July 3, along with a somewhat humorous statement saying: “Despite the downed missiles and the destroyed Russian manpower, our guys love to destroy the Orkostan army’s equipment.

“Today, it’s the turn of two tanks with stew inside. One of their soldiers successfully made it to our guys. He was complaining about the lack of organization and the indifference in the Russian army. We gave him food and our doctors helped him. Had to mention – now we have one more conscious ‘Russkie’!”

‘Orkostan’ is understood to be a humorous, fictional land populated by ‘Orcs,’ as the Ukrainian military regularly refer to the Russian invaders as “orcs”.

The 10th Mountain Assault Brigade was formed in 2015 and has seen considerable action in the Donbas region of eastern Ukraine.

We contacted the 10th Mountain Assault Brigade for further comment, as well as the Russian Defense Ministry, but haven’t received a reply at the time of writing.

Ukrainian President Volodymyr Zelenskyy, has said that Ukrainian forces would retake the city “thanks to the increase in the supply of modern weapons.”

The European Court of Human Rights intervened, demanding for the sentences not to be carried out but this was rejected by Russia, saying that it would not be implementing the court’s decisions anymore and that the decision to execute the men lies with the pro-Russian, so-called Donetsk People’s Republic that lies in eastern Ukraine.