Griller Warfare: Adults Will Get 970 Burgers, 794 Hot Dogs And 838 Kebabs In Their Lifetime 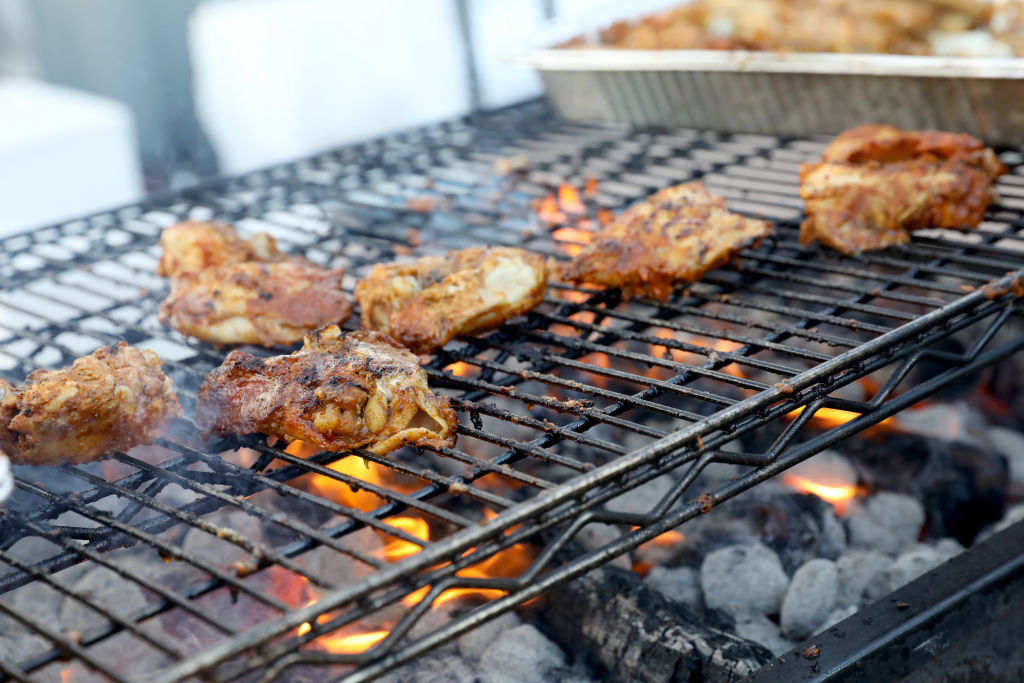 A view of the tasting during Backyard BBQ presented by Pat LaFrieda Meats and National Beef hosted by Andrew Zimmern during Food Network & Cooking Channel New York City Wine & Food Festival presented by Capital One at Pier 86 on October 17, 2021 in New York City. (Photo by Monica Schipper/Getty Images for NYCWFF)

This results in them consuming up to 750 ribs, 882 chicken pieces and 705 pork chops – or the plant-based equivalent – over the course of their lifetime.

When it comes to sides, 838 portions of potato salad will be enjoyed along with 794 corn-on-the-cobs and 838 servings of fries.

Each time adults host a barbecue, they predict their party gets through six loaves of bread, nine burger buns and eight hot dog rolls – despite only inviting four guests on average.

More than half have experienced a barbecue in the rain, resulting in the party sheltering indoors (23 percent), under a gazebo (25 percent) or cooking food in the oven instead (21 percent).

But 38 percent believe it’s typically British to have barbecues come rain or shine, while 24 percent embrace the occasions regardless.

Baker Street’s commercial director, Chris McLaughlin, said: “Our research shows just how passionate the nation is about having barbecues – no matter what the weather.

“Summer automatically means getting the grill out for many Brits – but we’re all familiar with running indoors due to the unpredictable weather, cooking food in the oven rather than on the barbie and that extra pack of buns for unexpected guests.

“The numbers really put into perspective how many outdoor get-togethers we’ll enjoy over the course of our lives and it’s nice to see how many people are gearing up for barbecues this year.

“Despite our best-laid plans, our outdoor occasions can get rained off, which is why our long-life burger buns and hot dog rolls are a summer staple to have in the cupboard, so you’re ready to take advantage at the first sign of sunshine, with no last-minute dash to
the shops.”

Almost a third admitted they are guilty of buying more food than is needed, spending an average of 78.50 pounds ($95) in the process.

But sometimes this is a good thing, as half have had unexpected guests at barbecues, most likely to be relatives (34 percent), friends of friends (28 percent) and neighbors (25 percent).

And three in 10 admitted they have attended someone else’s garden gathering without warning.

As a guest, 49 percent take along alcohol, while 20 percent arrive with baked goods and 16 percent provide dips.

Only 17 percent prefer hosting barbecues with 62 percent opting to attend someone else’s instead.

And the most popular roles when playing host were found to include welcoming guests at the door (25 percent), topping up food (24 percent) and being the drinks pourer (23 percent).

An hour and 38 minutes of the barbecue is spent socializing, while a further hour and 20 minutes is dedicated to cleaning the home and garden before and after.

While 58 minutes is spent prepping the food.

Classic burgers (53 percent), hot dogs (44 percent) and salad (40 percent) are what people believe are the most ‘staple’ foods to serve.

Yet those polled via OnePoll also like to dish up chicken pieces such as breasts or drumsticks (33 percent), potato salad (31 percent) and grilled vegetables (20 percent).

Chris McLaughlin added: “The research delivered some more surprising stats too, with those in Northern Ireland attending more barbecues in a typical year than anywhere else in the UK – proving we’ll get the grill on no matter the weather.

“With a quarter of Brits planning to have more barbecues than usual this summer, after years of not being able to do so one thing is for sure – we could do with some decent weather.”

«Previous Post
You, Me And Capri: Grandson Reveals The Story Behind Why His Grandad Left An Iconic Car On His Drive»Next Post
Bark From The Dead: Overjoyed Couple Back With Pet Pooch That Fell Off Yacht And Swam Ashore