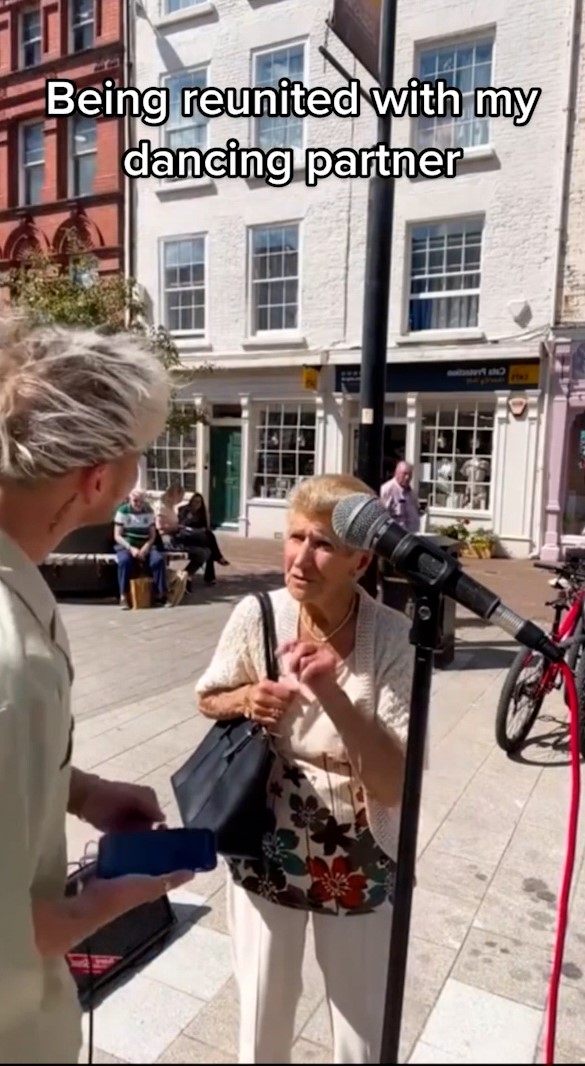 An elderly woman has become a social media sensation - for her energetic dancing on the streets of Hereford. (Molly Powell, SWNS/Zenger).

An elderly woman has become a social media sensation – for her energetic dancing on the streets of Hereford, in the west of England.

And his latest heartwarming clip shows the pair reuniting after nearly a year apart due to COVID.

Jason, 25, had first posted a video of himself dancing with Iris, taken in October of last year.

And, last week, he uploaded another clip of the duo dancing on the high street in Hereford city.

Jason, from Shrewsbury, Shropshire, England, posted the footage on TikTok, where more than 1.4 million people have now viewed it.

He said: “When I was busking, she danced along to my music, then the lockdown happened, so I didn’t see her.

“Then, all of a sudden, I was busking Monday, [June 27] she comes over, starts dancing along, and someone just happened to film it.

“It was about a year to the day that I filmed the original video with her dancing to Ed Sheeran.

“She came over, and she put money in my case. And I was like, ‘I know where from somewhere,’ and then when the video starts, she walks over and says the same.

“She suddenly realized and said, ‘you’re not my dance partner, are you?’.

“And then there’s just this beautiful moment where we both realized we knew we were dancing partners from over a year ago.”

Comments soon flooded in from viewers, expressing their delight at how happy the video made them feel.

One viewer commented: “Age is just a number!”.

Another wrote: “She has more style than me!”

Jason has been a full-time busker and musician since he was 16 years old, and his love for singing began when he was in a local choir from the age of eight.

He said: “Around Christmas time, I’d go knocking on people’s doors and singing Christmas carols with my cousin to try and get the odd 50 pence here and there.

“I love combining my love of making money and singing, so it seemed like the perfect combination.

“I’d mostly go out on my own, so I didn’t have to split the money with my cousin.

“From there, it kind of progressed. From the ages of 9 to 12, I’d go singing door to door with my friend from school.

“His dad would drive us to the rich part of town. And then, suddenly, we were getting 2 pound coins and 5 euro notes.

“From those things, I was able to spoil my family with new pairs of shoes and all this stuff.”

When he got older, he began to sing Christmas carols in town, and when he got his first guitar at 16, he started to busk.

He said he loved it so much and made enough money, so he quit his job and has been doing it full-time ever since.

Jason explained that touring the towns and cities of his native Britain suits him.

He said: “I don’t like staying in one place, and I get a bit itchy if I’m in the same place and I don’t leave for two weeks.”

The musician’s videos have become so popular that it has led him to perform some headline shows, with a live band, all across the country.