Lynne Smillie, 49, had planned to fly to Benidorm for a trip to celebrate her 49th birthday last month.
By Simona Kitanovska July 4, 2022
Facebook
Twitter
Linkedin
Email 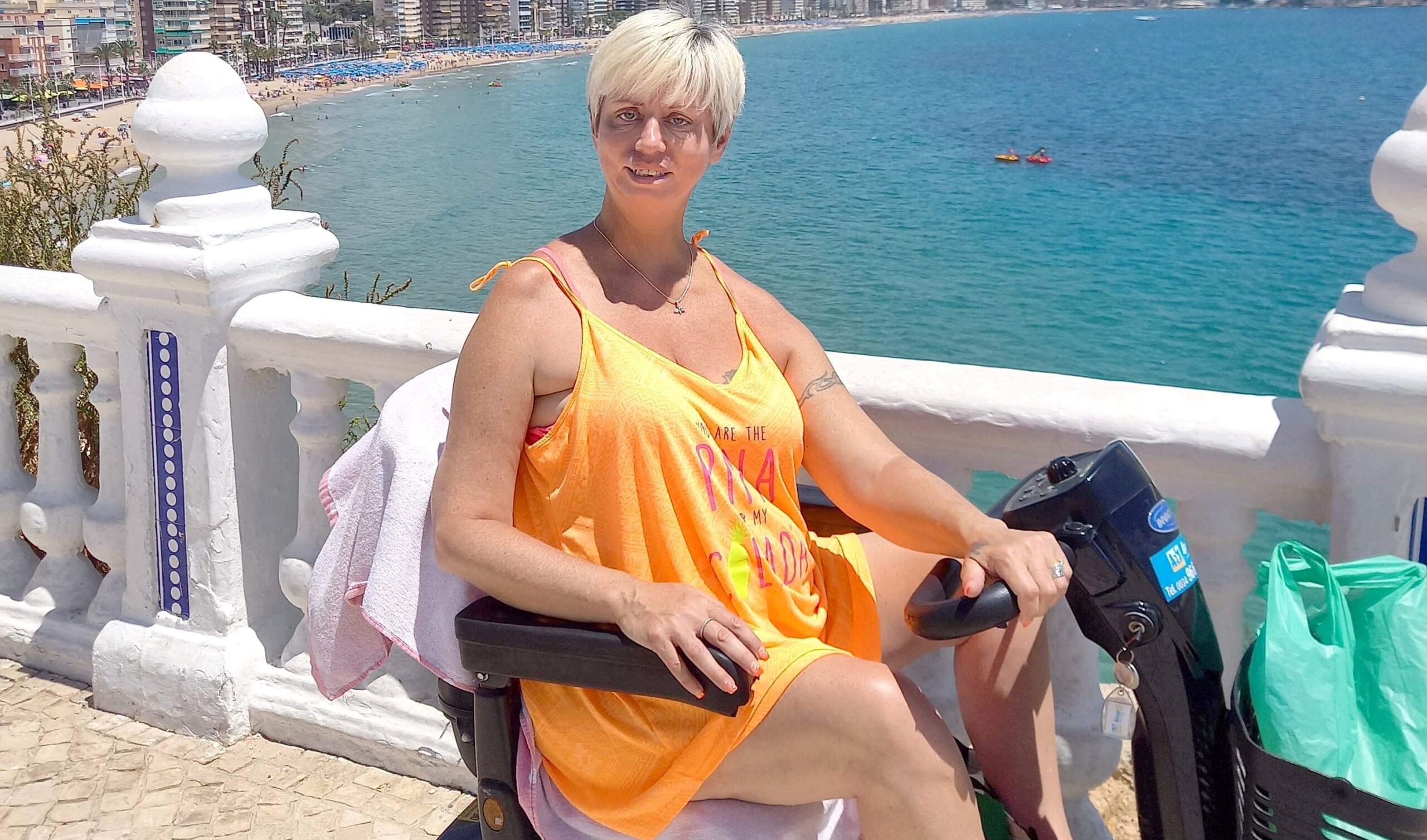 A disabled woman missed her flight after a series of blunders by staff - who allegedly left her by a lift while everyone else boarded. (Lynne Smillie, SWNS/Zenger)

A disabled English woman missed her flight after a series of blunders by staff – who allegedly left her by an elevator while everyone else boarded.

Lynne Smillie, 49, had planned to fly to Benidorm, a resort town on Spain’s southeastern coast, for a trip to celebrate her 49th birthday last month.

Excited for their trip, she and her husband Stephen, 54, arrived at their Manchester Airport gate right on time.

But she claims they were left waiting for assistance to use an elevator that only arrived AFTER another member of staff had disappeared with their boarding passes.

They were stranded and unable to board without the paperwork, forcing them to return the next day to jet off to Spain, they said.

Lynne, from Stalybridge in the Manchester metropolitan area in central England, described staff at the airport as “absolutely useless.”

She said: “I burst into tears, I was tired and worked up, and we could see the plane was still there.”

The couple had arranged to be met by workers from ABM, a service which provides special assistance at the airport, when they arrived on May 23.

But, to access their Ryanair flight, Lynne needed to climb up the stairs – which she was unable to do.

She says was taken to the disabled elevator by an ABM worker, who she claims told her and Stephen to wait for another employee to come and assist them.

But no one came, she claims, leaving the pair completely stranded.

Lynne said: “Usually, they put us in wheelchairs on first, but they didn’t. There were about five of us, and they left us to the end.

“A staff member asked if there was anyone who couldn’t get up the steps themselves, and everyone could except me.

“So, he took myself and my husband down and left us at the lift – saying someone would be back for us.

“We sat there stressing out because the departure time was getting closer and closer and there was literally nothing we could do about it.”

Twenty minutes later, Lynne alleges that a Swissport staff member, who are the handling agents for the airline, asked the couple for their boarding passes.

When she handed them over, she claims he wandered off without explanation, leaving them stranded once again.

Meanwhile, another ABM staff member came up to fetch Lynne and her husband – but they couldn’t go anywhere without their boarding passes.

Lynne claims that he went to talk to the man who had their passes, but by the time he returned, it was too late.

They claim they were told that the gate had closed and the pilot couldn’t accept them on the flight because it was too late to board.

Lynne, who suffers with muscular dystrophy, said: “They came for me but couldn’t take me because someone took our boarding passes.

“There was no explanation as to why he took our boarding passes – I still haven’t a clue.

“They just kept saying, ‘the pilot won’t accept you, I’m so sorry.’

“They said the only thing they could do was put me on a later flight, but we’d have to pay for the tickets. But why should we? It wasn’t our fault.”

At this point, Stephen offered to try and carry Lynne up the stairs, but the staff said it was too late and they missed their flight altogether.

Consequently, the couple had to take a flight out the next morning, a day later than planned, after an extremely stressful airport experience.

A Ryanair spokesperson said: “We sincerely regret the inconvenience caused to this passenger.

“As a gesture of goodwill, we re-accommodated her and her companion on the next available flight the following morning free of charge.”

“Like airports across the UK, Manchester contracts a third-party company to provide special assistance, which is booked directly by the passenger with their airline.

“We take special assistance requirements very seriously and, prior to the pandemic, were rated ‘good’ in the Civil Aviation Authority’s most recent Airport Accessibility report.

“We are confident that most people with special assistance needs traveling through our airport have a positive experience, but we recognize that this was not the case here.

“We will continue to work closely with our specialist provider to ensure passengers requiring special assistance receive the best service possible and to understand how a repeat of this case will be avoided.”

A spokesperson for ABM said: “We understand the importance of the special assistance service we provide to passengers. We always aim to deliver that service with efficiency, respect, and care and regret when passengers experience anything short of these standards.

“Learning from these moments, we are actively working with our teams, clients and partners to implement efforts to minimize the impact on passengers as we navigate this phase of the pandemic recovery.

“Special assistance providers are one part of a larger network of airport services that continues to face challenges, including a national labor and resource shortage. In addition, our teams are currently experiencing higher volumes of special assistance requests than our busiest pre-pandemic peak.”

Swissport has been approached for a comment, but hasn’t provided us with one at the time of writing.