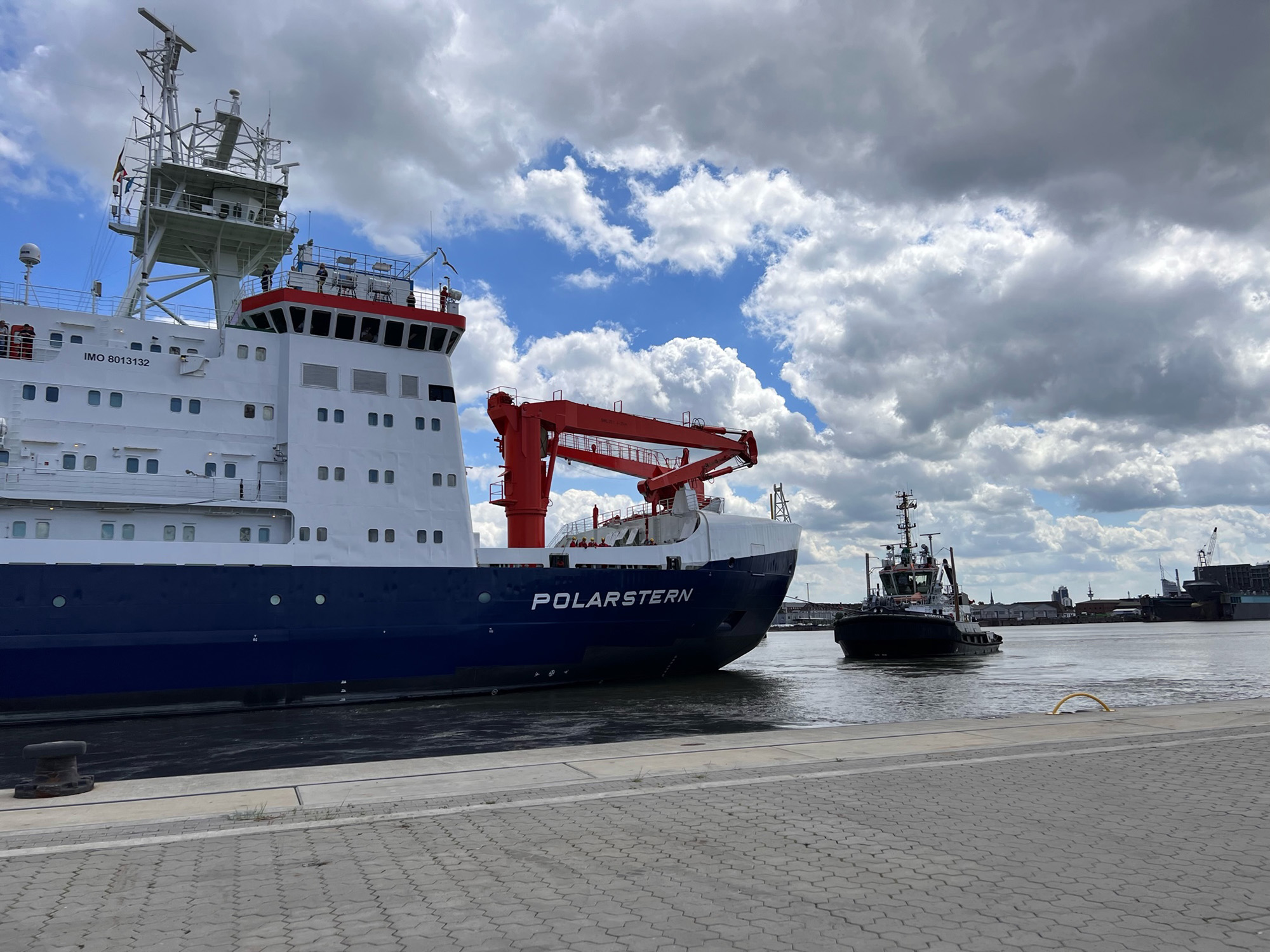 The Polarstern departs from its home port of Bremerhaven for the Arctic. A tug pulls the ship towards the lock. (Nina Machner/Zenger)

The legendary research vessel and icebreaker Polarstern has left Germany and is heading to the Arctic to assess the impact of climate change amid a record heatwave in Europe.

Over the last 40 years, the Arctic’s summer sea-ice extent has dropped by a staggering 40 percent, scientists say, and now the famous Polarstern research vessel has left port in Bremerhaven, on Germany’s North Sea coast, and is heading to the marginal ice zone north of the Svalbard Islands and off Greenland.

The Alfred Wegener Institute (AWI) for Polar and Marine Research said in a statement on Tuesday, June 28: “Today, the research vessel Polarstern will depart on a seven-week-long voyage to the Arctic, where the onset of summer also marks the beginning of the annual sea-ice melting.

“Over the past 40 years, the summer sea-ice extent has decreased by 40 percent – making it one of the most visible impacts of climate change.

“In a process study to be conducted in the marginal ice zone, the team of researchers on board will investigate how heat fluxes and water layering in the ocean, as well as the characteristics of the ice, interact and influence melting.

“A further focus of the expedition will be on the warming produced by Atlantic water circulation and its effects on marine glaciers in northeast Greenland.”

The team, led by Professor Torsten Kanzow, expedition leader and a physical oceanographer at the AWI’s Helmholtz Center for Polar and Marine Research will closely monitor energy and material flows in the marginal ice zone from the ship and from on ice floes.

Kanzow said: “We will make transects from the open water into the dense sea ice and back. Along the way, we will gather a variety of physical, chemical and biological measurements in the marginal ice zone, which is especially productive and therefore especially interesting.

He added: “The team will also venture onto the ice to take a closer look at the thickness and characteristics of the sea ice and measure ocean currents and eddies away from the ship.

“We’ll also deploy so-called gliders in the ocean, buoys on the ice and moorings on the seafloor, all of which will record valuable data for the next several years. Lastly, we’ll extend our research radius with helicopter flights, during which we’ll observe, for instance, the melt ponds on the ice.”

The AWI statement also said: “The study will be supplemented with atmospheric research, in which the characteristics and flows of aerosols and greenhouse gases in the atmospheric boundary layer, as well as the distribution of water vapor and clouds, will be evaluated.

“A further project is intended to show how oceanographic fronts, eddies and the ice edge itself, as well as sea-ice characteristics (melt ponds and light transmission), influence carbon export.

“In order to quantify the latter, the experts will assess the nutrient supply in the sunlit zone, as well as the distribution of phytoplankton and zooplankton (including jellyfish) and primary and net community production.

“This fieldwork in the marginal ice zone will help us to understand the impacts of climate change in the Arctic.”

The team also plan to head to north-eastern Greenland, where they will investigate the ocean’s influences on marine glaciers.

Kanzow said: “We plan to install moorings in order to gauge the sensitivity of ocean-driven glacier melting to changing environmental conditions.”

One of their goals will be to explore temporal variations in supraglacial lakes as when they drain out to sea, this can “have considerable effects on glacier flow speeds and glacier melting”.

The Polarstern is set to return to port in Bremerhaven in mid-August before heading to the Antarctic two weeks later.

The United Nations said on Friday, June 17, that “an unusually early and exceptionally intense heatwave has set new temperature records in Europe, posing a major threat to people’s health, agriculture and the environment.”

«Previous Post
A Little Help From Their Friends: Over Half Of Americans Want To See Friends Four Times A Month»Next Post
Troops Destroy Russian Ammo Depot With Hurricane Rocket Launcher