A Rare Bird: One Of A Kind ‘Dinosaur Bird’ Patiently Awaits A Mate To Save Their Species

The unique looking bird is just one of eleven shoebills in the world currently in captivity - and now the only one in the UK.
By Simona Kitanovska July 4, 2022
Facebook
Twitter
Linkedin
Email 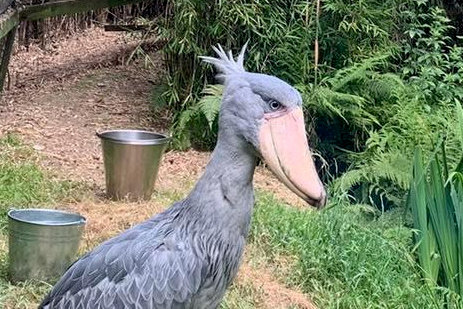 An extremely rare 'dinosaur' bird - the only one of its kind in the UK - is patiently waiting for a lifelong mate to help save her entire species. (Matthew Newby SWNS/Zenger News)

An extremely rare ‘dinosaur’ bird – the only one of its kind in the United Kingdom – is patiently waiting for a lifelong mate to help save her entire species.

Abou the female shoebill (Balaeniceps rex) that has recently arrived at Exmoor Zoo, in Barnstaple, Devon, in western England, as part of an international breeding program to save her species.

The unique looking bird is just one of eleven shoebills in the world currently in captivity – and now the only one in the UK.

They are monogamous and normally only rear one youngster, so combined with threats arising from climate change, they are a species “massively under threat.”

Abou, who is 14-years-old, was born and bred inside Pairi Daiza Zoo in Belgium.

The lovesick bird has been greeting her keepers with displays of bowing and spreading her wings – a common courtship ritual.

She’s been move to the UK to wait while the breeding program produces a male bird, so the pair can be matched and produce much-needed offspring.

Derek Gibson, curator at Exmoor Zoo, says the team are “delighted” to welcome their newest member of the family.

He said: “There has been a huge amount of interest in Abou – and rightly so, she is magnificent to behold.

“We accepted Abou as part of the European breeding program where there are more boys than girls.

“So, the idea is – if we can keep her well and she thrives – when a male does become available, then he will also come and join us at Exmoor Zoo.

“That would just be the most wonderful thing!”

Abou, who is 4 feet in height and weighs 12 pounds, has a wing span of 8 feet and has one of the largest and most unusual bills in the bird world.

Also known as whale heads, shoebills are at home in the swamps and marsh lands of East Africa, where they hunt fish and small invertebrates.

Derek says he has been waiting 40 years for the “amazing moment” when he finally got to see “a shoebill in the feather.”

He said: “In reality, I’ve never been in a position to see these amazing birds in the wild.”

Derek hopes the interest in Abou will raise awareness of the threats these species are facing around the world.

He explained: “We are talking about a bird which is very much under threat.

“Due to agricultural practices – such as pouring chemicals into rivers, intensive farming and of course climate change, shoebills are running out of places to go.

“They live in countries in central and eastern Africa – like Uganda, Zambia, Tanzania – which are prone to extended periods of drought, so there is a huge intensity on animals and people who are having to compete for the same environment.

“They are also very human and prehistoric looking, which encourages hunting and negative human interference.

“These birds do have their work cut out for them, which is why it is so important to offer Abou a home and put ourselves forwards to try and do our bit.”

Derek unveiled a few facts about these unusual shoebills:

He added: “Shoebills have one of the slowest wing beats of any birds – marking, on average, 150 flaps a minute.

“This number does not sound like a lot, but a hummingbird can flap over 4,000 times a minute – it really isn’t a bird that uses his wings a lot.

“They have very short necks compared to their massive head and quite big body.

“They are very energy efficient birds, everything they do is very patient, slow and deliberate.

“They have a life expectancy of 35 years – so our Abou is still a teenager – and we love her very much.”

«Previous Post
Pigeon Islands: Couple Of Rare Nearly Extinct Wild Pigeons Found In Scotland And Ireland»Next Post
A Little Help From Their Friends: Over Half Of Americans Want To See Friends Four Times A Month