The images allegedly show the weapon firing a salvo of missiles, with the footage then cutting to explosions.
By Joseph Golder July 1, 2022
Facebook
Twitter
Linkedin
Email 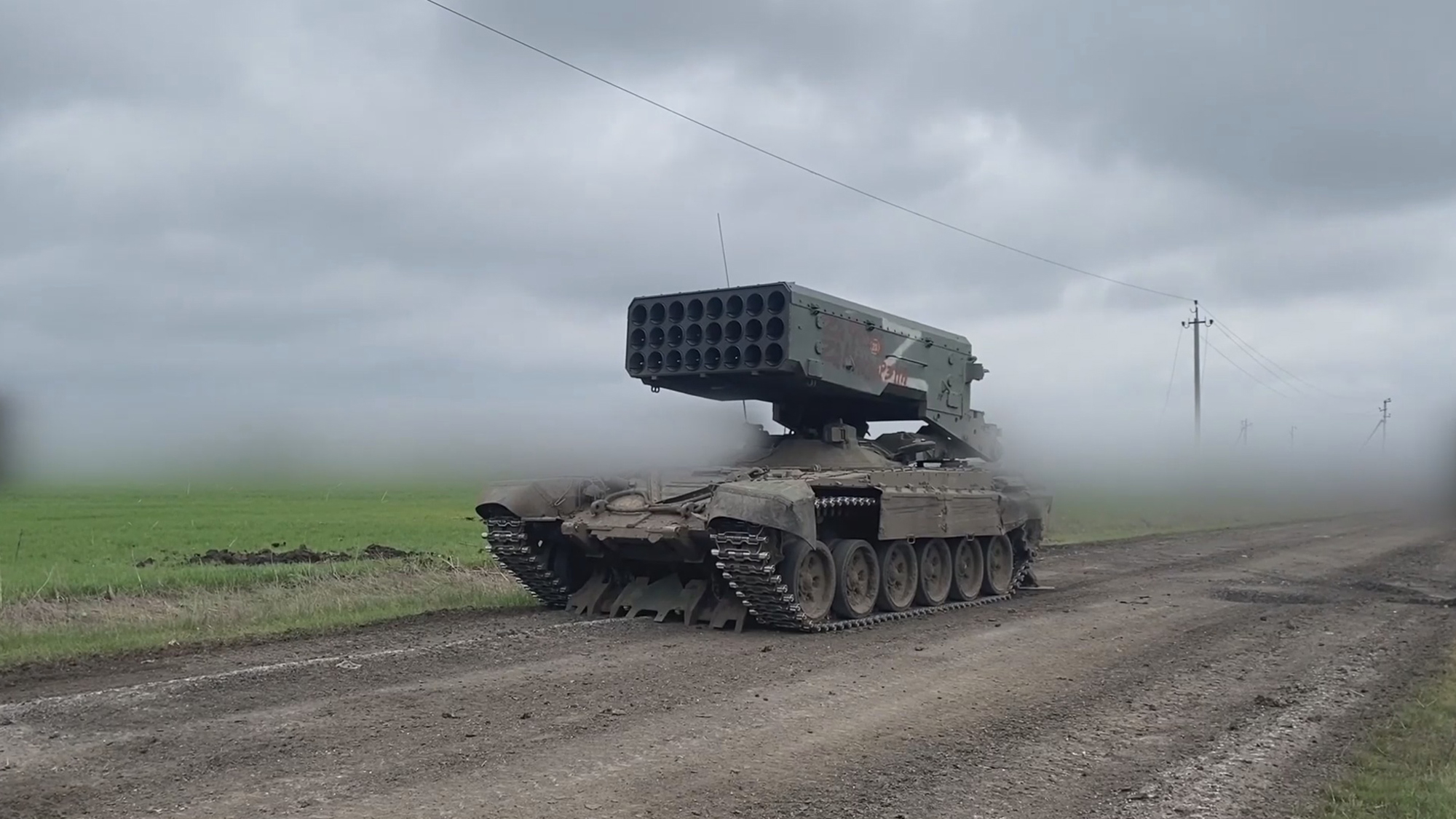 Russia showed off the weapon, with the video footage allegedly showing it in action somewhere in Ukraine. Russia claimed that it destroyed Ukrainian targets.

The images allegedly show the weapon firing a salvo of missiles, with the footage then cutting to explosions.

The images were obtained from the Russian Ministry of Defense (MoD), along with a statement on Thursday, June 30, claiming that the clip shows “the combat work of Western Military District personnel operating a heavy TOS-1A ‘Solntsepek’ missile system.”

The Russian MoD also claimed: “Heavy TOS-1A ‘Solntsepyok’ systems are designed for fire support of infantry, tanks, the destruction of open and closed firing positions in various types of offensive and defensive combat, as well as for disabling lightly armored vehicles.”

A thermobaric weapon is a kind of explosive that, using oxygen from the air, generates a very high temperature that can reach 3,000 degrees Celsius (5,400 degrees Fahrenheit).

We contacted the Russian MoD for further comment, as well as the Ukrainian Defense Ministry, but haven’t received a reply at the time of writing.

NATO leaders have called Russia “the most significant and direct threat to allies’ security and stability,” and announced a new “strategic concept” in response to Russian President Vladimir Putin’s ongoing invasion of Ukraine.

President Biden congratulated the three countries, saying: “Congratulations to Finland, Sweden, and Turkey on signing a trilateral memorandum – a crucial step toward a NATO invite to Finland and Sweden, which will strengthen our Alliance and bolster our collective security – and a great way to begin the Summit.”

President Putin said: “If Finland and Sweden wish to, they can join. That’s up to them. They can join whatever they want.”

But the Russian leader added: “If military contingents and military infrastructure were deployed there, we would be obliged to respond symmetrically and raise the same threats for those territories where threats have arisen for us.”

The Russian strike on a shopping mall in the central Ukrainian city of Kremenchuk has been described by Ukrainian President Volodymyr Zelenskyy as one of the “most brazen terrorist acts in European history.”

Over 1,000 people are said to have been inside the building when it was hit by missiles. Eighteen people have so far been confirmed dead.

Speaking about the Russian strike on the crowded shopping mall, Putin claimed: “Our army does not attack any civilian infrastructure site. We have every capability of knowing what is situated where.”