The alligator was ‘arrested’ this week by the police in the city of Kingsland, Camden County.
By Lee Bullen July 1, 2022
Facebook
Twitter
Linkedin
Email 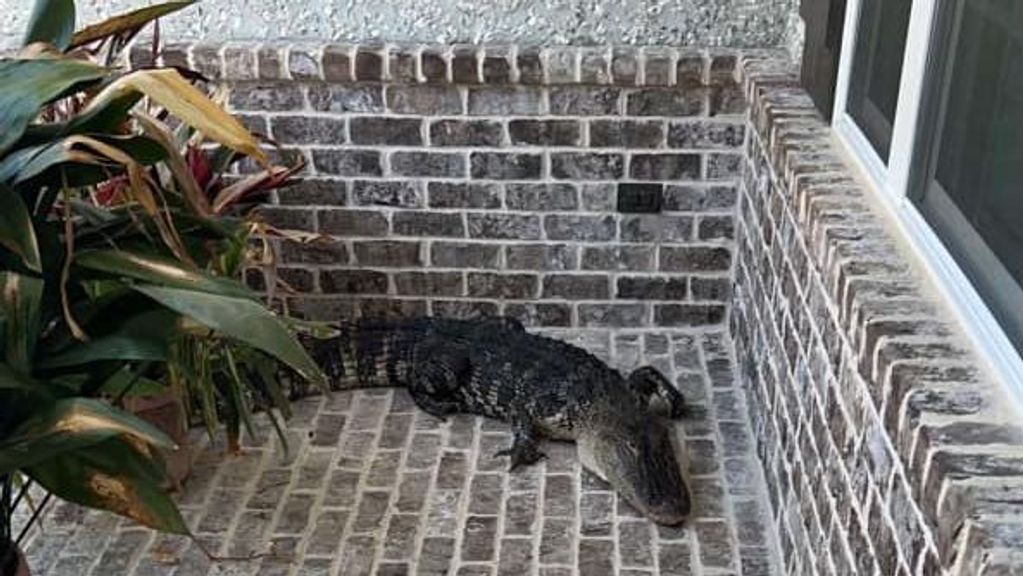 An alligator was found on a patio, in Kingsland, Georgia, USA, on June 29. (@KingslandPD/Zenger)

A graphic video showed how a brave Georgia cop carefully lets go of an alligator’s jaws while releasing it into a river.

The alligator was ‘arrested’ this week by the police in the city of Kingsland, Camden County, which lies on the south-eastern coastline of Georgia.

The large reptile was caught trespassing on a resident’s patio, according to the cops, and was promptly placed ‘under arrest’ by Officer Thornton of the Kingsland Police Department.

A photograph obtained from the Kingsland Police Department shows the alligator on the patio, lounging in the corner, behind a potted plant.

Officer Thornton was accompanied by Dale Taylor from the planning and zoning department and together they captured the alligator and released it into the St. Mary’s River, as can be seen in this footage.

The police joked that they released the reptile into the river so they could “enjoy the rest of their day.”

In the footage, Officer Thornton can be seen gripping the alligator’s jaws after leading it to the river’s edge with Dale Taylor seen standing nearby.

Officer Thornton slides the reptile away from himself and takes several steps back after releasing the large animal as the alligator opens its jaws and sees the river.

Officer Thornton laughs as the reptile powers into the water and Taylor can be heard saying: “Oh yeah, she’s happy now.”

The Kingsland Police Department said in a statement obtained by Zenger News on Wednesday, June 29: “One of our residents had an uninvited guest this morning! With the assistance of Dale Taylor from planning and zoning, Officer Thornton caught the gator and released him or her in the St Mary’s River to enjoy the rest of their day.”

It is unclear if the alligator faces further police action for trespassing after being released into the river by the authorities.

An estimated 200,000 American alligators live in Georgia, according to the Georgia Aquarium.

The American alligator (Alligator mississippiensis) is native to the south-eastern United States.

Adult male American alligators can reach nearly 16 feet in length and can weigh in at up to 1,230 pounds. They are apex predators and mainly feed on fish, other reptiles, birds, and mammals.

They used to be listed as ‘endangered,’ in the 1970s. But they are now listed as ‘least concern’ by the International Union for Conservation of Nature’s (IUCN) after significant conservation efforts increased their numbers.

‘Alligator’ is a name derived from the Spanish word for ‘reptile.’