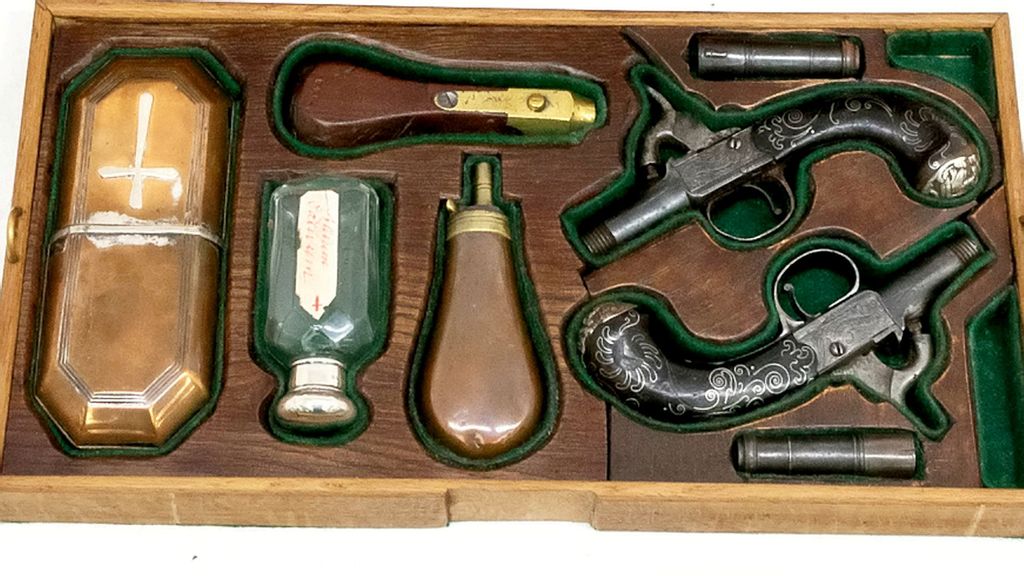 A vampire slaying kit which belonged to a 19th century lord who kept guns, crucifixes, holy water and a wooden stake in case of an attack, is going under the hammer. (Steve Chatterley, SWNS/Zenger)

A vampire slaying kit which belonged to a 19th century English lord who kept guns, crucifixes, holy water, and a wooden stake in case of an attack, is going under the hammer.

The tools and holy objects are stamped with his initials and it contains his full name and address.

The lockable box features two brass crucifixes on the lid which act as a sliding secret locking device.

Auctioneer Charles Hanson said: “Items like this always capture the imagination of the world.

“Belief in vampires, an undead creature said to need human blood to survive, goes back hundreds of years and persists in some parts of the world today.

“The provenance reminds us that the vampire myth affects people from all walks of life.

“Whether through fear or fascination, the owner of this particular kit was a lord, a member of the highest aristocratic social order able to sit in the House of Lords.

“And yet, amid his illustrious career, he was drawn to this vampire-slaying kit.

“That’s perfectly understandable. These objects are both curious and intriguing.

“Vampires have been part of popular culture for more than 200 years. They are enshrined in European folklore.

“The task of killing a vampire was extremely serious and historical accounts suggested the need for particular methods and tools.

Items of religious significance, such as crucifixes and Bibles, were said to repel these monsters, hence their presence in the kit we have found.”

Author John Polidori’s The Vampyre was published in 1819 which a major impact, followed up by Bram Stoker’s 1897 Dracula.

The seller, from Derbyshire, discovered the macabre kit only recently.

They said: “It’s a fascinating item, a conversation piece. I came across it in Southwell, Nottinghamshire, fairly recently.

“I liked it for its novelty and historical value.

“Interestingly, Lord Hailey has a memorial tablet in London’s Westminster Abbey which pays warm tribute to him.”