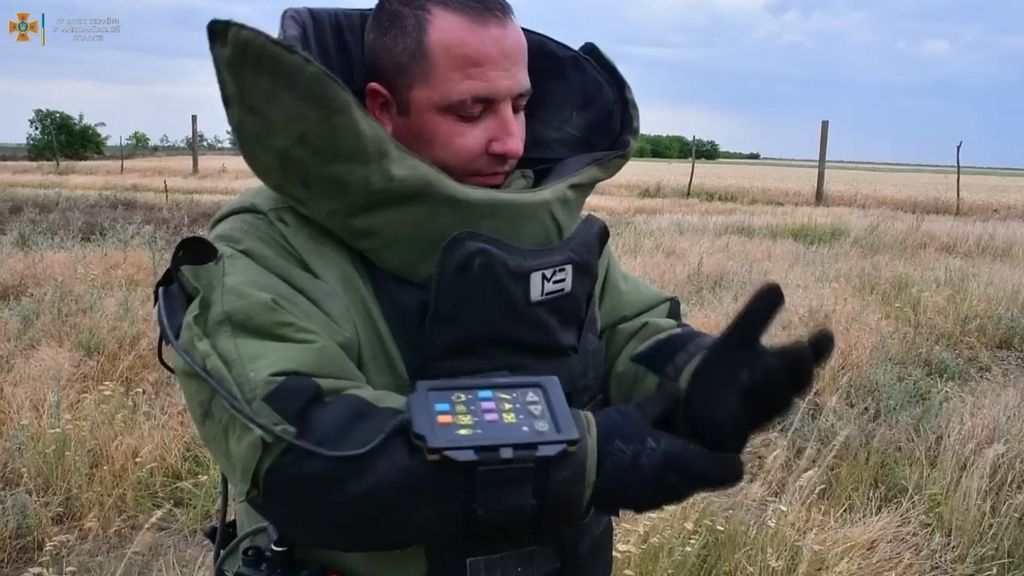 Pyrotechnics removed 59 ammunition on June 27th in the open territories and fields of the Nikolaev area. (@MNS.GOV.UA/Zenger)

These images show Ukrainian rescue workers detonating Russian explosive devices found in a field, with officials saying they have found thousands since the beginning of the war.

Officials also said that they are no longer harvesting wheat, just Russian “enemy iron.” The images are concerning because Ukraine is often called “the world’s breadbasket” and the “granary of Europe.”

The footage shows workers from the State Emergency Service (SES) of Ukraine detonating Russian explosive devices from the fields of the Mykolaiv region in south-western Ukraine, near the strategically vital port city of Odessa.

The footage was obtained from the SES of Ukraine on Tuesday, June 28, along with a short statement saying: “Meanwhile, the enemy is sowing our fields with deadly metal.

“The granary of Ukraine, our south, suffers daily from enemy shelling.

“And every day, we do not harvest wheat, but we harvest enemy iron.

“During the last day alone, rescuers in the Mykolaiv region found and removed 59 pieces of ordnance in the area’s fields.

They added: “Look at the deadly work our heroes are doing.”

And the Mykolaiv City Council, which also relayed some of the images, said in a short statement: “The Main Directorate of the State Emergency Service of Ukraine in Mykolayiv Oblast continues its work to remove and destroy explosives left behind by enemy shelling.

“On June 27, bomb disposal experts processed 12 alerts and seized 59 pieces of ordnance in the open territories and fields of the Mykolaiv district and the city of Mykolaiv.

“In total, since the beginning of the war, 2,865 pieces of ammunition have been seized and 3,386 call-outs have been handled.”

The Russian bombing on a shopping mall in the central Ukrainian city of Kremenchuk has been described by President Zelenskyy as one of the “most brazen terrorist acts in European history.” Over 1,000 people are said to have been inside the building when it was hit by missiles.

Ukrainian President Volodymyr Zelenskyy has urged the United Nations to visit the site and has urged for Russia to be expelled as a permanent member of the UN Security Council, accusing the country of having become a “terrorist state.”