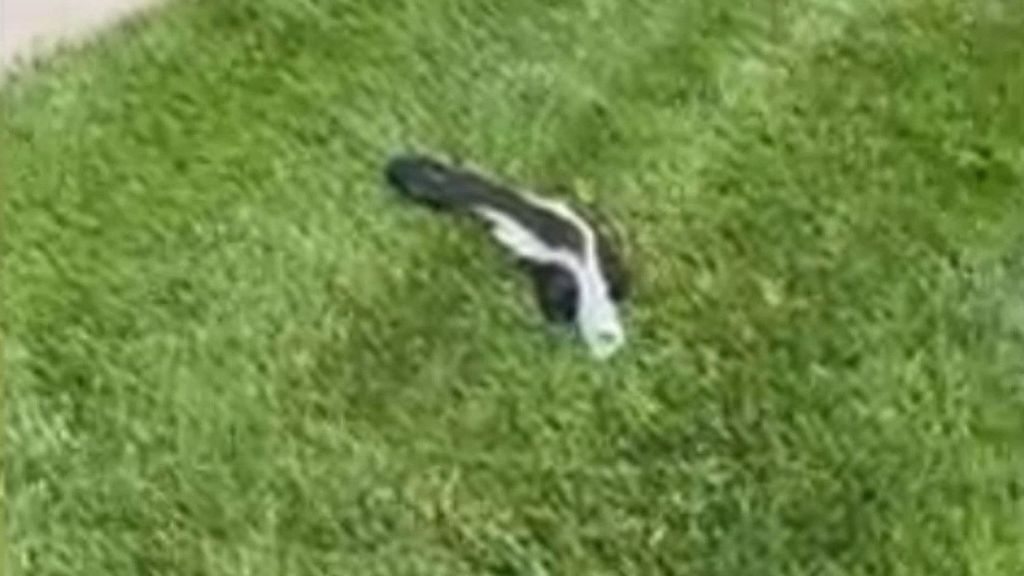 Animal control officers rescue of a skunk found wandering a neighbourhood with its head stuck in a beer can, in Lincoln , Nebraska, on 26th June. (@LincolnAnimalControl/Zenger)

This is the moment Nebraska police officers free a thirsty skunk with its head stuck in a Miller Lite beer can.

The stinky woodland creature was rescued by Lincoln Animal Control officers in the city of Lincoln, Nebraska.

Lincoln Animal Control said on June 26: “Operation Drunk as a Skunk was successful!

“Just a friendly reminder to responsibly dispose of your garbage in order to not potentially harm the wildlife!”

In the footage, the skunk is seen running around a grass median with its head apparently stuck in the beer can.

A female animal control official tries to pull the can from the skunk’s head, but without any luck.

She then throws a towel over the animal’s body to prevent it from moving while her colleague carefully twists the beer can off the skunk’s head.

With its sight returned, the skunk scampers across the grass to make its way home without kicking up a stink.

Nebraska, which lies near the center of the continent, boasts two skunk species: the eastern striped skunk (Mephitis mephitis) and the eastern spotted skunk (Spilogale putorius).

In local dialect, the spotted skunk is sometimes called a polecat or civet cat because of its resemblance to the Old World civet, but it is not related to either true civets or cats.

While the striped skunk is about the size of a domestic cat, averaging 6 to 8 lbs and up to 15 lbs, the spotted skunk is much smaller, and averages 1 to 4 lbs.

Striped skunks can climb obstacles, but are not as nimble as spotted skunks, which can climb trees.

Skunks are omnivorous and are active throughout the year and forage in forests and agricultural areas to city lawns and parks. They are known for digging up grubs and insects on suburban lawns, as well as spraying inquisitive pet dogs with their offensive odor.

A skunk’s sulfuric spray can hit targets up to 10 feet away and its stench can be detected at least one mile away. They like to feast on honeybees and wasps and often attack beehives, being immune to stings because of their thick fur.

Skunks are also known to eat venomous snakes and are immune to their poison.