The images were obtained from the Land Forces of the Armed Forces of Ukraine, along with a short statement on Monday, June 27.
By Joseph Golder June 29, 2022
Facebook
Twitter
Linkedin
Email 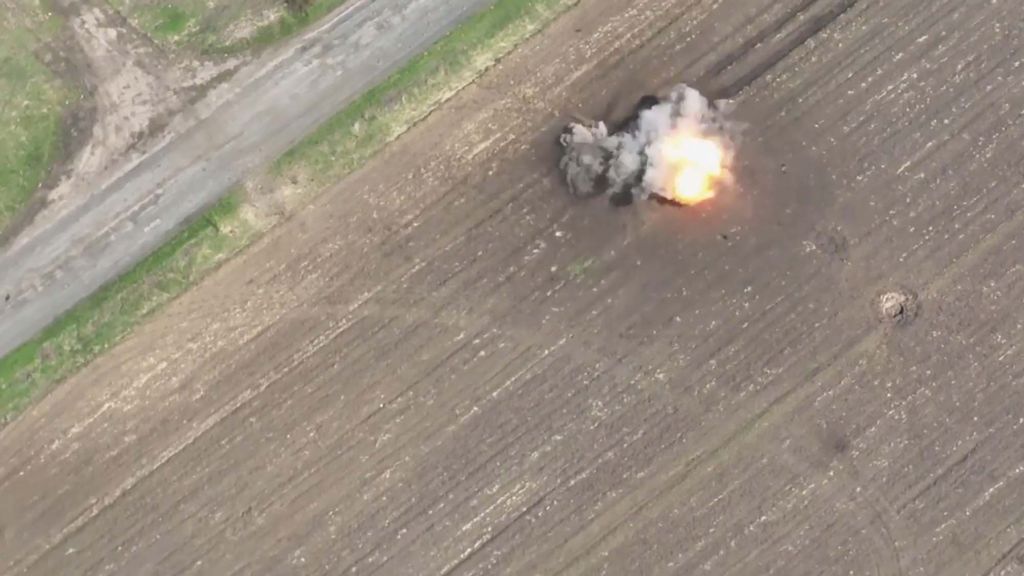 Ukrainian forces have reacted with puzzlement at the sight of this Russian tank driving through a minefield before it suddenly blows up.

Two Russian tanks make their way across a plowed field, as these images show.

Although there is a road running parallel just next to them it appears to be blocked by wreckage of an earlier incident and as a result, the tanks head over the field in single file.

The footage then cuts to what appears to be a Russian military vehicle having made its way close to where the tank at the head of the convoy blew up, perhaps in a bid to rescue any soldiers still alive inside it.

The images were obtained from the Land Forces of the Armed Forces of Ukraine, along with a short statement on Monday, June 27, saying: “An offensive or an annoying suicide? Sometimes it is difficult to work out what the Russian troops are doing.”

And 93rd Mechanized Brigade of the Armed Forces of Ukraine, which also relayed the images, jokingly added: “We are starting the week with optimistic videos. May more Russian tanks burn on our land!”

While the Strategic Communications Department (StratCom) of the Armed Forces of Ukraine said: “We will win the war together, 93rd Mechanized Brigade!”

We contacted the Armed Forces of Ukraine for further comment, as well as the Russian Ministry of Defense, but haven’t received a reply at the time of writing.

Last week, the European Union approved Ukraine’s application to become a candidate for admission to the bloc, which is currently made up of 27 countries. The decision was hailed in both Brussels and Kyiv as a “historic moment”, with President Zelenskyy saying that “Ukraine’s future is in the EU.”

Last week, Russia conducted an anti-ship missile exercise in the Baltic Sea amid escalating tensions with NATO member Lithuania after the latter country blocked the transit of some goods to the Russian exclave of Kaliningrad.