The lace was found in an attic of a grandmother in Somerset.
By Simona Kitanovska June 29, 2022
Facebook
Twitter
Linkedin
Email 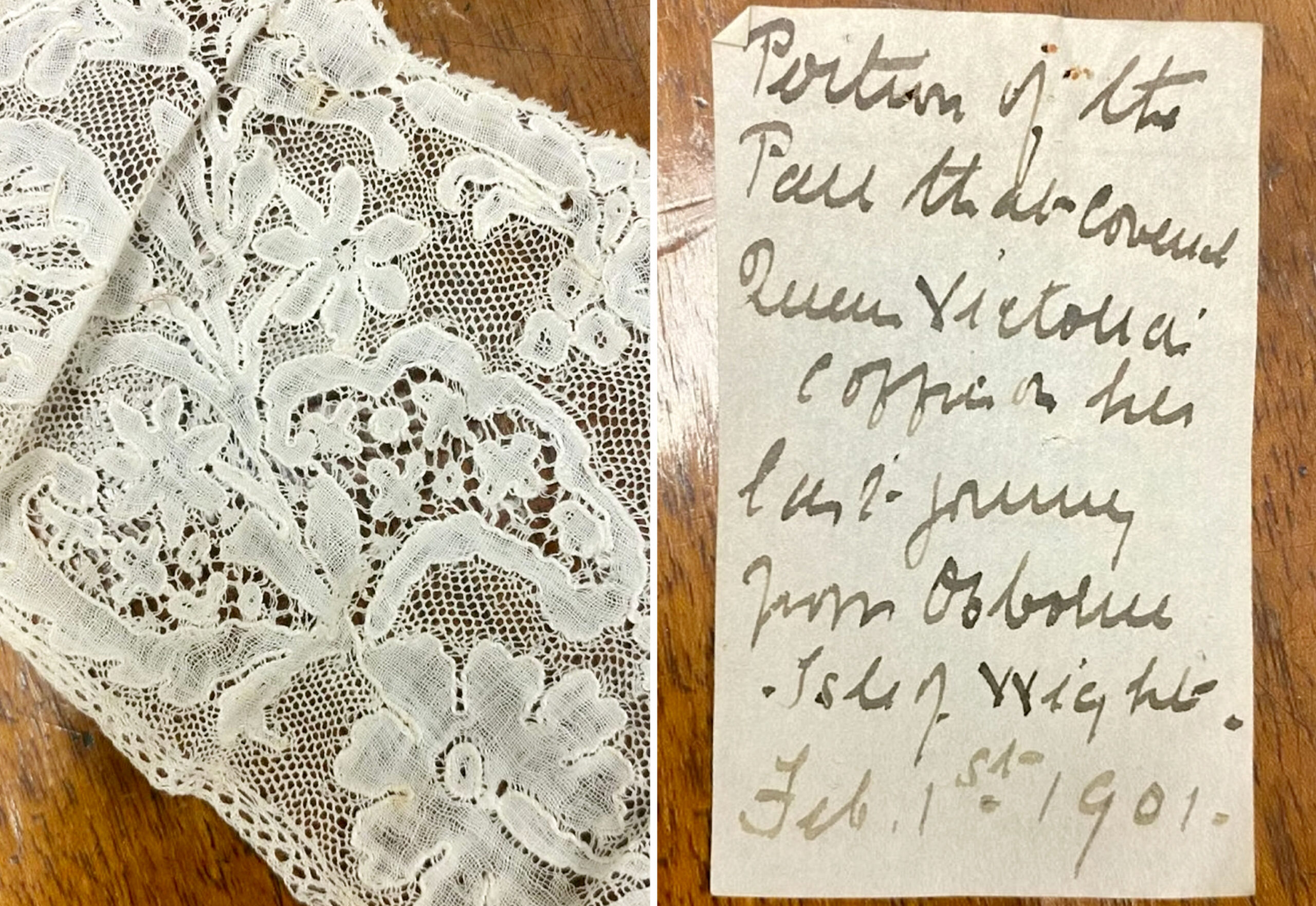 A white lace shroud which is believed to have been draped over Queen Victoria’s coffin more than 120 years ago has been discovered in a loft. (Steve Chatterley/Zenger/SWNS)

A white lace shroud which is believed to have been draped over Queen Victoria’s coffin more than 120 years ago has been discovered in a loft.

The lace bears a note which reads, “Portion of the Pall that covered Queen Victoria’s coffin on her last journey from Osborne. Isle of Wight. Feb 1st 1901.”

It was found in an attic of a grandmother in Somerset and is believed to have been given to one of her high-society ancestors by the Royal Family.

A deathbed photo shows her surrounded by copious amounts of white lace and flowers and is holding a cross in her hands.

Despite being famed for wearing black following the death of her husband Prince Albert 40 years earlier, she requested only white material at her own funeral.

The seller, a 60-year-old mother of four and grandmother from Somerset, said: “I was given the lace by my grandmother more than 40 years ago when I was a teenager.

“It went into my treasure box, a collection of family items I’ve kept since childhood.

“The lace has been sealed away in darkness in my attic for years. I hope that has helped to preserve it.

“I came across it again about a month ago and my daughter suggested I show it to an antiques specialist.

“She was married to an army major who died in the First World War in 1914. My great-grandparents lived at Hampton Wick in Kingston upon Thames.

“My grandfather, who was born in 1900, documented family history and kept a journal of family memorabilia.

“His family tree showed his family name came from royal descent. My grandparents’ marriage was arranged as was the custom between families of standing at that time.

“His journal dates back to the 1800s and both sides of the family came from long-standing Army families of high rank.

“On reflection, I think the lace could have been passed down through his family.

“He died in 1979 and, at that point, the lace would have come into my grandmother’s possession.

“I have always been fascinated by family history so my grandmother shared family stories with me and gave me photos and special items like this.

“Perhaps the lace was given to an ancestor who served Queen Victoria in some way, either through the military or aristocratic connections.

“I’m told a member of my family was a Lady. The lace is very special and historically important, so just lying in my memento box in the attic seems such a waste.

“It needs to be somewhere where it can be appreciated, hence my decision to sell it.”

Notty Hornblower, textiles consultant at Hansons Auctioneers, said: “This is a remarkable find, and very touching.

“In some small way the lace reflects the overwhelming love Queen Victoria had for her husband.

“Her request to be buried in white wearing her wedding veil, and to have a white pall on her coffin suggests she was looking forward to being reunited with him.

“What a wonderful piece of royal history to own and cherish. It’s worthy of a museum or royal collection.”