The findings are based on seven million-year-old fossilized sperm whale skulls from the coastal desert of southern Peru.
By Simona Kitanovska June 29, 2022
Facebook
Twitter
Linkedin
Email 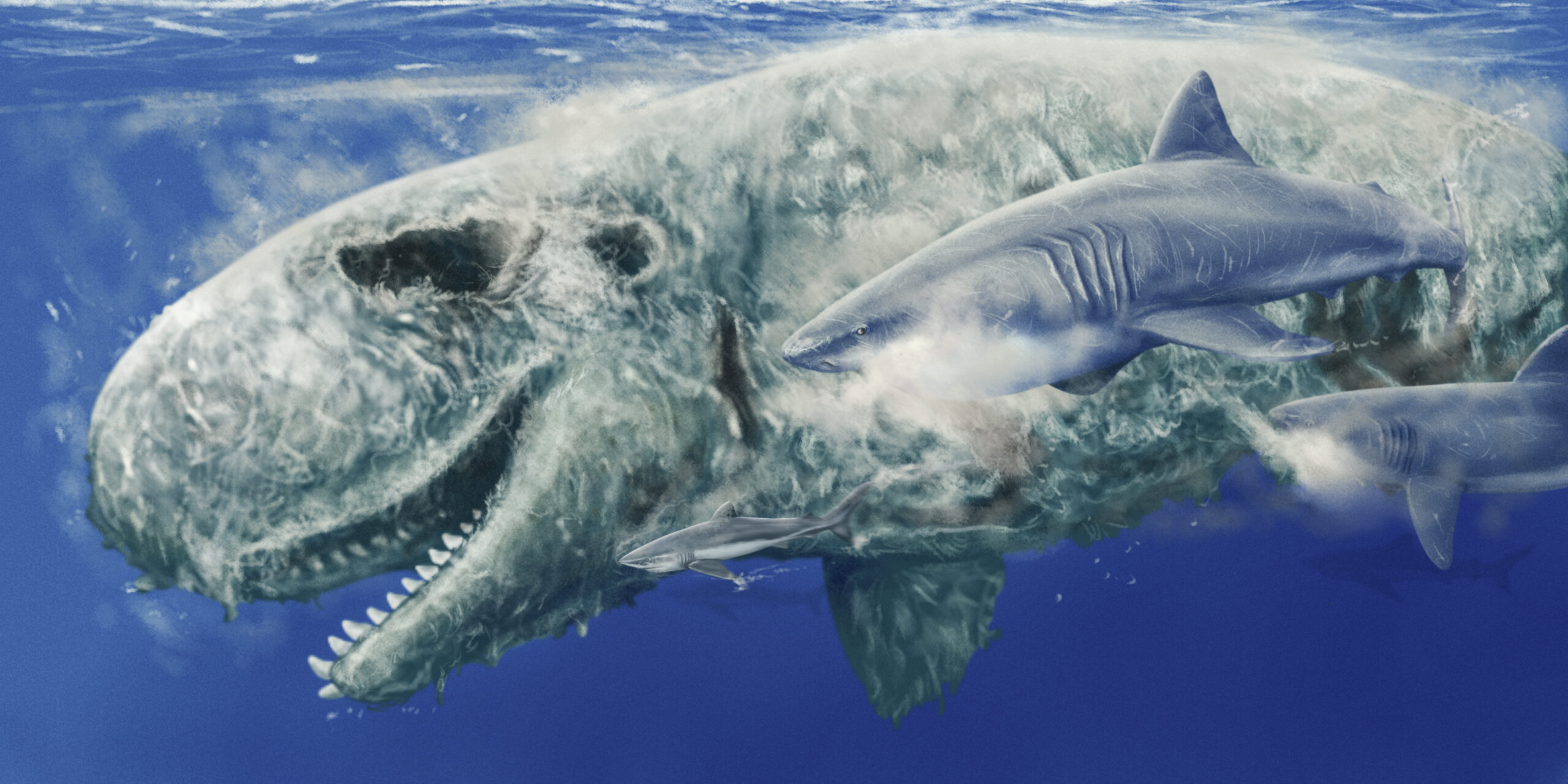 Megalodon - the biggest shark that ever lived - ate sperm whales for breakfast, according to new research. (Matthew Newby, SWNS/Zenger)

Megalodon – the biggest shark that ever lived – ate sperm whales for breakfast, according to new research.

The huge and powerful sea monster was attracted by the cetaceans’ huge nose – which accounts for a third of the body and its spermaceti oil.

The sperm whale’s enormous snout is packed with oily saturated fats. They generate the clicking sounds used for echolocation and communication – and boost buoyancy.

The tissue was Megalodon’s most nourishing food. The iconic beast was three-and-a-half times bigger than the Great White – up to 65 feet long and weighing over 50 tons.

It could have ripped off a sperm whale’s head – biting through the flesh with its seven-inch serrated teeth.

The findings are based on seven million-year-old fossilized sperm whale skulls from the coastal desert of southern Peru.

A series of bite marks indicate sharks – including Leviathan – consistently fed on them. They shed fresh light on the evolution of marine ecosystems.

Lead author Aldo Benites-Palomino, a paleontology student at Switzerland’s University of Zurich, said: “These are concentrated along the nose, mouth and face.

“In sperm whales, these regions receive most of their greatly enlarged nasal organs that are responsible for the sound production and emission system.

“The main organs of this complex are the spermaceti and the melon, structures rich in fats and oils, but also heavily regulated by the facial muscles.

“Most of the bite marks have been found on the bones that would be adjacent to these soft tissue structures, such as the jaws, or around the eye, thus indicating that sharks actively targeted this region.”

They ranged from Megalodon to species that are still around today including mako sharks, sand sharks – and the Great White.

Sperm whales included small fish eaters like Koristocetus to bizarre ‘pygmies’ like Scaphokogia and Leviathan melvillei – which was 60 feet long and weighed 60 tons.

It was only discovered in 2008 – more than 150 years after Herman Melville wrote Moby Dick.

Benites-Palomino said: “Bite marks found on other taxa such as Acrophyseter or even the giant Leviathan indicate despite their role as apex predators, big hunting sperm whales also constituted a food source for late Miocene sharks.”

In the oceans, the Miocene was a time of changing circulation patterns, probably due to global cooling.

It spanned 23 million to five million years ago. By the end of it, almost all modern groups of whales had appeared.

Half a dozen skulls were unearthed at the Pisco Formation in the Ica Desert – a world-renowned site.

It is famous for a treasure trove of Miocene shark and ray remains, bony fishes, turtles, marine crocodiles, seabirds, whales, and seals.

Benites-Palomino said: “Sperm whales are a group characterized by their greatly enlarged, and rich in fat, nasal organs, which they use for sound production.

“These are located across the skull regions which housed these organs, indicating a feeding preference by sharks over these nasal organs.

“Such a feeding pattern has no modern preference and suggest the broad diversity of Miocene sperm whales served as a fat repository for prehistoric sharks.”

During the last 30 years, explorations carried out in the area have also unveiled aquatic sloths and even walrus-faced dolphins.

Benites-Palomino said: “It indicates a rich and diverse ecosystem seven million years ago.

“Among these, sperm whales and sharks were some of the most abundant and conspicuous groups around.

“During the last decade paleontologists across the globe have been inquiring about the interactions between these two large groups of marine predators.”

The study in Proceedings of the Royal Society B open a window into the connections between them.

Benites-Palomino said: “The overall shape, size and arrangement of the bite marks is greatly variable, suggesting more than one species of shark was targeting the sperm whales.”

Most of the skulls belong to eight-foot-long Scaphokogia – an odd animal characterized by a tubular, brick-shaped snout rostrum.

It is believed sharks directly targeted the animals in the water – and also scavenged them.

Today, sharks seek the carcasses of baleen whales with high concentrations of fats – such as the blubber.

Benites-Palomino added: “During the Miocene baleen whales were small, but sperm whales would have constituted a perfect fat repository due to their greatly enlarged and lipid-rich nasal organs.”

Megalodon and Leviathan died off about three million years ago during to a period of global cooling. The reasons for their demise are still being debated.