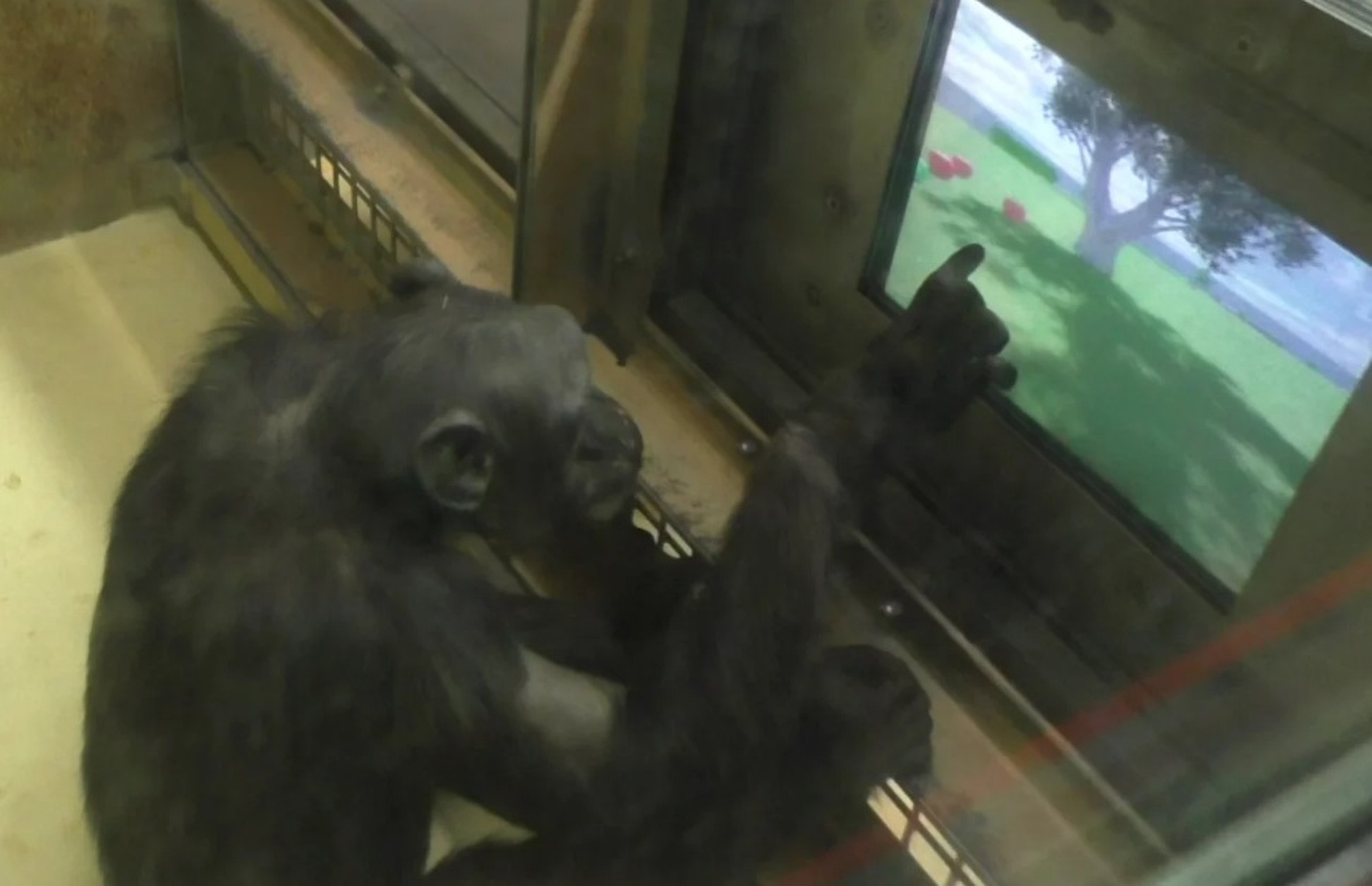 One of the chimpanzees from the Leipzig Zoo in Germany that participated in the study completing spatial tasks at a remarkable speed. (Max Planck Institute for Evolutionary Anthropology/Zenger)

British and American researchers have found that chimpanzees can master hunting for hidden fruit in a virtual reality video game.

The study, led by Matthias Allritz and Josep Call from the University of St Andrews in the UK and Francine Dolins at the University of Michigan-Dearborn in the United States, found that chimpanzees used landscape features for better orientation while searching for virtual fruit in the game.

The University of St Andrews and the Max Planck Institute for Evolutionary Anthropology in Leipzig, Germany, said in statements obtained on Monday, June 27, that using touchscreen technology, six chimpanzees living in a zoo had learned to find their way to a distant virtual tree with different types of fruit underneath it.

They even worked out how to find the landmark from different starting locations.

The primates, located at Leipzig Zoo in, took part in “the first empirical study of how chimpanzees navigate an open-field, naturalistic, virtual environment and demonstrates that chimpanzee maneuvers in the virtual world share several key features with real-life navigation.”

The University of St Andrews added in its statement: “The results also suggest that virtual environment technology can be used to address longstanding questions in the study of primate spatial and other forms of cognition.”

Dr. Matthias Allritz, postdoctoral researcher at the University of St Andrews and the Max Planck Institute for Evolutionary Anthropology, said: “Almost all animals navigate their environment to find food, shelter and mates.

“Because of the space restrictions in zoos, studying the spatial cognition of nonhuman primates experimentally is notoriously difficult.

He added: “Beyond the clear goal-orientation in the chimpanzees’ spatial learning, one thing that stood out to us was the remarkable speed at which the chimpanzees learned to control the virtual agent and to complete the spatial tasks.

“It required less training than I originally thought it would, and certainly less than many of the more traditional touchscreen tasks designed for animals.”

The University of St Andrews statement said: “All six chimpanzees had prior experience with using touchscreens, and five of them had limited experience with 3D video games at the time the study began.

“All participation was voluntary, and all testing was conducted in the apes’ familiar testing areas at WKPRC, where they are given access to touchscreen tasks regularly.

“A new custom virtual reality (VR) application – APExplorer 3D – was created for the study, presenting the primates with a virtual environment through which an invisible, first-person character could be steered to explore and interact with objects in a three-dimensional cartoon style.”

The video game allows the user, using a touchscreen monitor, to guide a virtual avatar “through an open space containing grassy hills, trees, rocks and other obstacles.”

The game difficulty was increased over the course of a month, with “progressively more challenging navigation tasks”, with the virtual world geared toward displaying “several cognitive processes and behavioral signatures within the virtual environment that have been predicted to guide navigation in the wild, such as learning to recognize and search for distinct landmarks and to optimize route efficiency.”

Dr. Francine Dolins, principal investigator and associate Professor at the University of Michigan-Dearborn, said: “Tracking primate navigation in the wild has many challenges, including not knowing what landmark information they use as the basis for making spatial decisions.

“Virtual reality affords greater control over what landmarks are presented and where they are in relation to the virtual foraging sites, for example, a fruiting tree.”

“The chimpanzees in our study learned the basic game mechanics quickly and soon exhibited learning and decision-making patterns that resembled real-life navigation.

“They learned to recognize certain objects as landmarks and to orient and search for these when they could not see them.

“And they flexibly adapted when food availability became less predictable – though some of them were clearly faster than others.

“Provided that future studies can replicate and extend these findings to other primate species, naturalistic virtual environments may become a powerful tool to address longstanding questions in the evolution and development of primate navigation that had previously been difficult to study in captive environments and in the wild.”

And Dr. Allritz added: “Chimpanzees are the closest living relatives of humans, so understanding how they make travel decisions and how they recognize, remember and reason about travel routes does not only help us to better understand them, it is also critical for understanding the evolution of navigational abilities in our own species.”

The statement also said: “From a welfare perspective, the chimpanzees may also benefit from the cognitive enrichment that virtual environment games may provide, given their creative problem-solving and innovative abilities.”

The team are planning to make a version of the APExplorer 3D app available on the Open Science Framework so that other researchers may also replicate their methods and adapt them to their own research questions.

The study, titled ‘Chimpanzees (Pan troglodytes) navigate to find hidden fruit in a virtual environment’, was published in the academic journal Science Advances on June 24, 2022.

«Previous Post
Death Bed: Fulfilling OAP’s Dying Wish To Find Child Actress Who She Starred With In ‘King And I’»Next Post
Ready, Set – Action – Many Americans Believe They Could Be An Action Movie Star