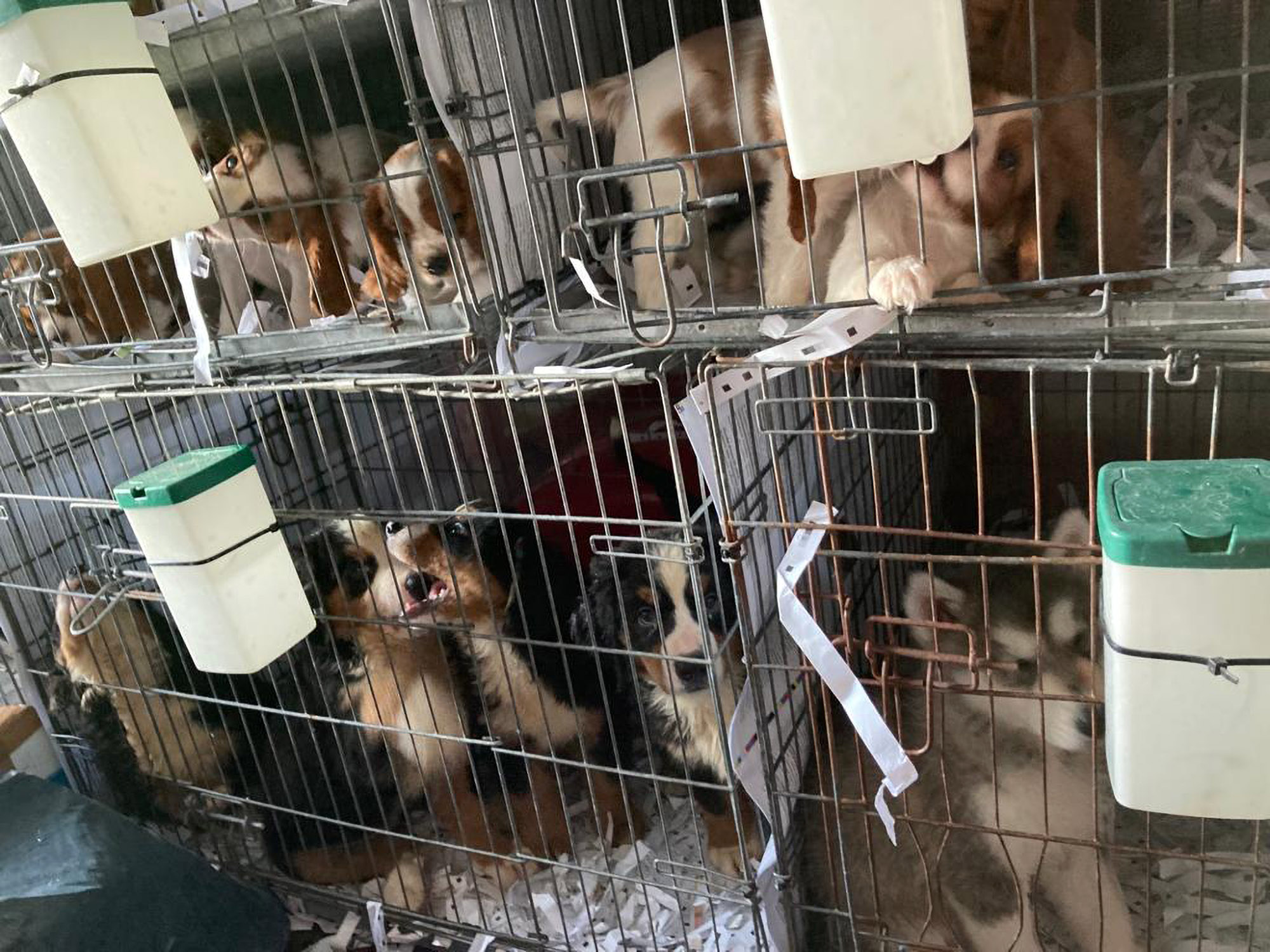 Some of the 72 puppies that were rescued by police officers in the German municipality of Waidhaus located in the state of Bavaria. (Landesverband Bayern, Deutscher Tierschutzbund LV Bayern e.V./Zenger)

Police have saved 72 puppies after they pulled over a van transporting them in appalling conditions.

Many were dying from dehydration after being left without water on what was due to be a 1,900-mile journey from Slovakia to Portugal.

These heartbreaking images show how the parasite-infested pooches – believed to have come from an illegal puppy farm – suffered on the cruel journey.

Suspicious border police had stopped the vehicle on June 26 as it tried to enter Germany from the Czech Republic.

The German Animal Welfare Association found that the young dogs were not vaccinated against rabies despite forged documents saying they were.

They had been kept in their cramped cages for days, said the police.

The animals were confiscated by animal welfare officials and are now being kept in quarantine in animal shelters across Bavaria.

Police are now investigating three suspects who had been transporting the puppies for possible violations of the Animal Welfare Act.

“On the night of last Sunday, 72 puppies were confiscated by the border police from a van near Waidhaus/Oberpfalz.”

Dr. Romy Zeller – the association’s pets specialist – added: “The merciless business with puppies continues – without regard to the welfare of the animals.”

The statement continued: “According to the Bavarian State Association of the German Animal Welfare Association, the majority of the animals confiscated at Waidhaus were under 12 weeks old and therefore too young to be imported into Germany.

“The transporter was on its way from Slovakia to Portugal. Several of the puppies of different breeds were dehydrated and almost all were infested with ectoparasites.

“After being seized by the official veterinarian, the animals are now distributed to various animal shelters in Bavaria, where they are being cared for and nursed.”

The statement went on: “Every year, the German Animal Welfare Association evaluates the illegal pet trade cases that come to its attention.

“The results make it clear that the increased demand for pets since the beginning of the corona pandemic has massively influenced and driven the illegal puppy trade.

“In 2021 there was almost a doubling of cases and illegally traded dogs compared to the previous year.

“If you compare the number of cases and affected dogs in 2021 with the time before the pandemic in 2019, they have increased fivefold. The illegal trade in pedigree kittens is also booming.

“The number of unreported cases is likely to be many times higher. The animals are usually too young to legally cross the border, and they are often in poor health.”

Dr. Zeller added: “In order to contain the problem, transnational measures would have to be taken – for example a Europe-wide obligation to identify and register animals, regulation of internet trade, increased education, increased controls and tougher penalties for offenders.”

The statement continued: “Since animal shelters that take in confiscated animals are often left with the costs, the German Animal Welfare Association also demands legally binding regulations on the assumption of costs.”

«Previous Post
Pawfect: Owners Have Shared Their Snaps That Sum Up What The Journey Of Pet Ownership Looks Like»Next Post
Border Farce: Woman Who Had Life-Saving Brain Surgery In Spain Stopped On UK Border For Drug Search