Why Scent Is The Next Frontier For Technology 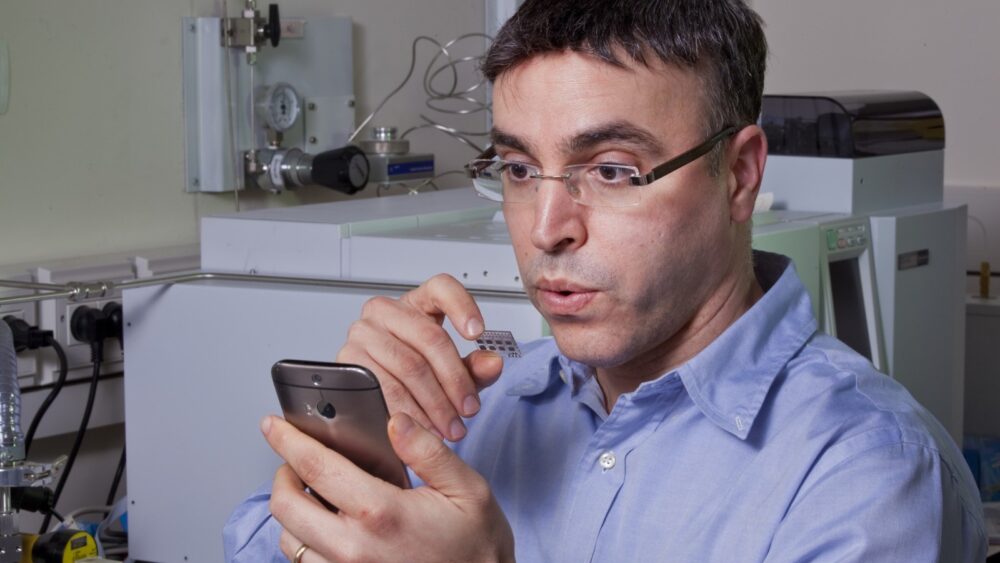 One of the most upsetting Covid-19 side effects for many people has been the loss of smell and taste – sometimes continuing for months.

While Israeli tech hasn’t solved that problem, the country’s startups are at the forefront of altering our relationship with scent.

Whether that’s consumer applications such as smell-enhanced movie theaters; devices that include non-invasive sniffers that can detect diseases; or artificial noses designed to identify explosives, scent-tech is looking to be the next big whiff.

“The issue is how to distinguish one scent from all the confounding factors and scents around it in order to get a robust signal to rely on,” explains Technion Prof. Hossam Haick, who is credited with jumpstarting the local scent-tech scene with his pioneering lung cancer sniffer.

Take ethanol as an example.

“Anyone can detect this, it’s very easy,” Haick says. “But here in Haifa, we have a thousand other compounds in the air – fluctuations in humidity and temperature, other contaminants. So, the challenge is not to detect the ethanol per se but to discriminate it from the other compounds.”

Israeli startups are up for the task, which Haick says, “makes me glad, as someone who has established this field. I worked for many years to disseminate the results of this research.”

Haick’s own work is now extending beyond cancer to detect Alzheimer’s, tuberculosis, Crohn’s disease and more – a total of 17 diseases.

The latest direction for Haick and his Technion team is in even wilder: smelling blood to detect cancer.

“We can detect a single cancer cell in 20 ml of blood,” he tells ISRAEL21c. “We don’t have to do any special ‘blood refining.’ We just take the blood as is and smell it. The cancer changes the scent.”

Coming next: smelling urine. “We’ve tested this now on 2,000 patients,” he notes.

It’s not just about health. Detecting food spoilage is another growing use case.

“Today this is done by a human smelling it. It’s not always an objective decision,” Haick notes. An electronic nose would be more consistent. And, while connoisseurs might not appreciate it, a computer algorithm can analyze a glass of red or white wine more effectively than a living, breathing sommelier.

Researchers at Ben-Gurion University (BGU) and the Technion each have projects to detect cancer with an artificial nose.

The Technion project, NaNose, is based on Haick’s research, which has already successfully detected advanced-stage lung and stomach cancer in clinical studies.

At BGU, researchers have been able to detect breast cancer with more than 95 percent accuracy using two different e-noses that identify unique breath patterns in women with breast cancer. Mammogram sensitivity is typically between 75 percent and 85 percent. The BGU results were published in the journal Computers in Biology and Medicine.

NanoScent announced in 2021 that it was working on adapting its scent technology to “smell” Covid-19 in air blown into a straw through a person’s nose. A sensor in the NanoScent “box” looks for a VOC (volatile organic compound) “signature” in the exhaled air and can return a test result in 30 to 60 seconds. NanoScent has teamed up with Abu Dhabi-based G42 Healthcare to validate and manufacture the device, dubbed ScentCheck.

NanoScent’s main business is helping food manufacturers identify spoilage and contaminants and working with utilities and semiconductor makers to monitor the cleanliness of their gas lines. NaNose is also working on a Covid-19 sniffer.

Adi Wallach started experiencing panic attacks while pursuing her undergraduate degree in biomedical engineering at the Technion. She tried everything short of medication – therapy, yoga, biofeedback. She changed her diet, took supplements, tried acupuncture. Eventually, Wallach developed her own solution.

CalmiGo is a handheld device resembling an asthma inhaler. Using tactile feedback, it prompts users to breathe slowly and methodically. While users are calming themselves, the device emits a pleasing smell of lavender, peppermint or bergamot. You can buy CalmiGo on Amazon.com. The US Veterans Administration is making the device free for ex-military personnel.

Did you ever wish you could smell the delicious food being shown in a movie or cooking program? Or enjoy the fragrance of wet leaves in a rainstorm? Israeli startup iRomaScent’s device releases highly targeted whiffs either on demand or in sync with a video.

The device can be loaded with up to 45 different scents and can store over 5,000 “whiffs” using a narrow pencil beam that directs the smells to a specific viewer. It’s not just for the movies: A home device could help consumers get a sniff of perfume without visiting the nearest mall.

Israeli startup Moodify is developing scents to replace the pine-scented air fresheners rental car agencies use to mask odors. The technology, based on a decade of neurobiology research at the Weizmann Institute of Science, temporarily affects how the brain interprets smell, similar to how a white-noise machine dulls unpleasant sounds by saturating the space with a neutral audio background.

Moodify’s small device can sit underneath a car’s seats or in the ventilation system. Future scents will do more than neutralize smells – a second product in development can wake you up while a third is intended to reduce stress. The company has raised $8 million including from Toyota.

In the US alone, 32 million people suffer from allergies to a variety of foods, resulting in some 300,000 annual visits to the ER. Yokneam-based Allerguard is developing a device that can sniff them out.

Wave the device over a plate of food in a restaurant and you’ll receive results (indicated by a green or red light) in 60 seconds. Each sniff, which will require the insertion of a new “card,” will run less than $1, with the device itself running $150.

“It’s a medical device but we don’t want the user to be labeled as someone with a problem,” CEO Shai Hershkovich told ISRAEL21c. “It has to be hip enough for even the most trend-sensitive teenager to use.”

In 2014, Prof. Fernando Patolsky of Tel Aviv University’s School of Chemistry devised a set of sensors and algorithms that can detect and analyze vapors from explosive materials. The technology was spun off into the Herzliya-based startup Tracense.

The company’s TS100 device is known as an EVD – an “electro-chemical explosive vapor detector.” It addresses the change in terrorist tactics to using improvised or homemade explosives that generate vaporous molecules rather than trace particles – the main way explosive detection had been conducted until recently.

But if the artificial nose fails, there’s always an alternative – in this case, pigs.

Researchers at the Azrieli National Center of Brain Imaging and Research at the Weizmann Institute of Science have found that the “baby smell” on a newborn’s head has some surprisingly practical purposes: It triggers mothers to be more aggressive and fathers to be gentler.

This primes mothers to protect their babies and makes fathers less inclined to act aggressively towards their offspring.

The researchers initially expected the newborn’s scent would reduce aggression in both genders. “Babies cannot communicate through language, so chemical communication is very important for them,” explains Prof. Noam Sobel, in whose lab the research took place.

If an unconscious person can respond to smell (detected through a slight change in nasal airflow patterns), the patient is likely to regain consciousness, researchers at the Weizmann Institute and Loewenstein Rehabilitation Hospital found.

According to the findings, published in the journal Nature, every brain-injured patient who responded to a “sniff test” regained consciousness during the four-year study period.

Unpleasant odors lead to shorter and shallower sniffs. The sniff response can occur in both wakefulness and sleep. The scientists concluded that the integrity of the olfactory system provides an accurate measure of overall brain integrity.

By stimulating sleeping participants with the smell of roses, researchers were able to strengthen specific memories.

The smell of a pungent rose can also help boost memory, scientists at Tel Aviv University and the Weizmann Institute of Science reported in the journal Current Biology.

Study participants were exposed to the scent of roses while they were asked to remember the location of words presented on the left or right sides of a computer screen.

The scent was then administered in only one nostril at a time. This apparently reactivated memories stored in the specific brain hemisphere associated with that nostril.

The hemisphere that received the scent revealed better electrical signatures of memory consolidation during sleep. When participants woke up, they were tested again, and their memory proved significantly better for the words presented on the side of the computer screen associated with the smell.

The Weizmann Institute’s Sobel also discovered that the body odor of a woman’s mate may be connected with uRPL – unexplained repeated pregnancy loss.

“It seems these losses of pregnancy may be ‘unexplained’ because physicians are looking for problems in the uterus, when they should also be looking in the brain, and particularly the olfactory brain,” says Reut Weissgross, who co-led the study.

Sobel was quick to point out that “correlation is not causation, so our findings do not prove in any way that the olfactory system, or body odors, cause miscarriage. But our findings do point to a novel and potentially important direction for research in this poorly managed condition.”

The post Why scent is the next frontier for technology appeared first on ISRAEL21c.