More than 400,000 of the insects were stolen in five hives - with officials believing the culprit is likely to be a local beekeeper.
By Simona Kitanovska June 28, 2022
Facebook
Twitter
Linkedin
Email 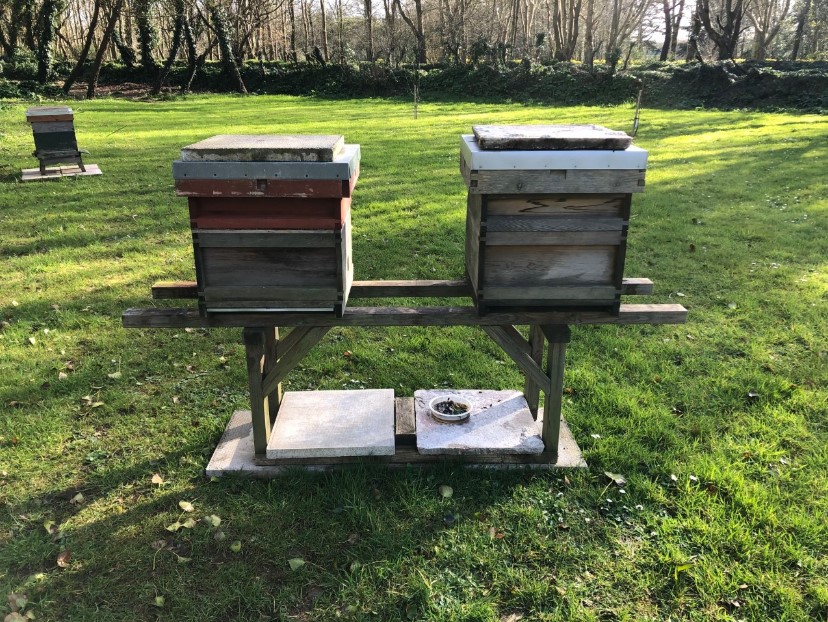 The two bee hives that were stolen contained over 400,000 bees. (Kathrin Barnes/Zenger)

Thousands of bees stolen from a country estate have returned by themselves – after apparently fleeing their captors.

More than 400,000 of the insects were stolen in five hives – with officials believing the culprit is likely to be a local beekeeper.

They were stolen from Tresillian House, in Cornwall, England, in an audacious heist. The culprit’s tire tracks in the grass was the only evidence.

Police said they believed the hives were being stored locally – and now the industrious honey makers have started to return of their own accord.

Assistant beekeeper Kathrin Barnes said the returning bees were being put into a new hive as they returned.

They suspect the bees are nearby and hope all will return to the estate in St. Newlyn East, Cornwall.

She said: “There are so many it indicates that they are nearby and are on their way back home.

“If bees are moved less than a mile they go back to where they were before.

“They will probably all come back if they are chasing after a smell, that’s our hope.”

Head beekeeper Guy Barnes said he felt “stressed and emotional” by the theft.

He said each hive contained 80,000 bees and removing all five of them would have required expertise and a large vehicle.

Guy said he believed the heist must have been carried out by another beekeeper as beehives are heavy and tricky to transport and handle.

He said: “It might have been for the money, but I don’t know. Unfortunately, my gut feeling is it’s another keeper.

”You’d need to know what time of day to get them, have multiple people, and have a vehicle big enough to transport them.

”They are such an important part of our local eco-system. For beekeepers, it’s a labor of love and it’s ten years’ work.

“I got the devastating call on Sunday morning, and photos of this pair of tracks going into the field and just empty sites where all these hives were.”

Sergeant Steve Applewhite, who is also a beekeeper, said: “We have been told that some bees have returned to the site where the hives were, before being stolen, this means that it is likely that these hives have been initially relocated or stored only a few miles away from Tresillian House.

”It would also take quite a large vehicle to carry a cargo of this considerable weight and it would be incredibly difficult to handle and carry alone.

“It is a well-used road so it is very likely that passing drivers may have seen suspicious people or the vehicle carrying the hives.

“This crime is of concern as not only has it meant that a person’s property has been stolen, but as a beekeeper myself, I am also concerned for the welfare of the stolen bees.

”We are appealing for witnesses and asking for anyone who was in the area late Saturday and into Sunday to report anything of note. We are also asking for our public to check [closed-circuit television] and road users to check dashcams in case they have captured anything of note.”