Pushed To The Limit: A Mechanic Has Smashed The World Record For Most Push-ups In An Hour

"I wanted to put a purpose behind what I went through and continue to go through dealing with CRPS."
By Simona Kitanovska June 28, 2022
Facebook
Twitter
Linkedin
Email 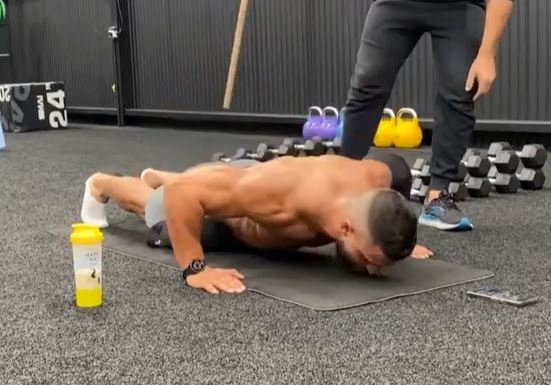 A mechanic has smashed the world record for most push-ups in an hour - completing a staggering 3,182. (Simon Galloway/Zenger)

A mechanic has smashed the world record for most push-ups in an hour – completing a staggering 3,182.

Daniel Scali, 28, took on the Herculean task in April and surpassed the previous best of 3,054.

His total has been officially confirmed and becomes the second Guinness World Record he has to his name.

Daniel, from Australia, also holds the record for the longest time spent in the abdominal plank position, recording nine hours and 30 minutes in August 2021.

And, incredibly, he has done all this while suffering from a condition that can cause excruciating pain.

Daniel, from Henley Beach, said: “I suffer from a condition called Complex Regional Pain Syndrome (CRPS) which I’ve had since I was 12.

“CRPS is rated 42 out of 50 on the McGill Pain Index. To put that in perspective, child birth is rated at 40.

“It developed when I broke my arm in a bad accident, and it’s virtually my brain telling my left arm that there’s pain there.

“Anything from a soft touch, wind, or a slight movement can cause unbearable pain, so I shower without getting my left arm wet.

“Water, especially, is like a razor blades running across my arm.”

Daniel says CRPS has had a significant effect on his day-to-day life.

Growing up wasn’t easy for him, and he often couldn’t go out because of the constant, incurable pain caused by the condition.

At its worst, Daniel was hospitalized for months, and a local anesthetic had to be administered to his left arm to ease his suffering.

“I wanted to put a purpose behind what I went through and continue to go through dealing with CRPS,” he said.

“I wanted to prove to myself that I have learnt how to deal & manage pain which lead me to my attempts.”

But the pain wasn’t enough to stop him from powering through over 3,000 push-ups in just one hour.

Daniel’s effort saw him complete 3,182 push-ups on his third attempt at the challenge – making him a two-time world record holder.

While breaking both records, he has also raised a whopping £50,000 for the Australian Pain Management Association.

“For me breaking these records has been about raising awareness for chronic pain sufferers and inspiring belief in others.

“I believe anyone is capable of anything they put their self out there to achieve.

“Although at times it might be hard and the days may seem longer, if you continue to pursue your goal, you are guaranteed a better outcome than those who don’t.

“I’m extremely happy and grateful to everyone that supports me with my achievements and I’m already looking forward to what comes next!”

The push-up record (male) was previously held by Jarrad Young, a fellow Australian, in 2021.

«Previous Post
Four Out Of Five Apps For Preschool Kids Designed To Make Money Off Them»Next Post
Cowardly Cat: Nervous Sherlock Hides In Cupboard When Anyone Comes To The Door