"Children love their favorite media characters so that they may be particularly susceptible to pressure from them.”
By Simona Kitanovska June 28, 2022
Facebook
Twitter
Linkedin
Email 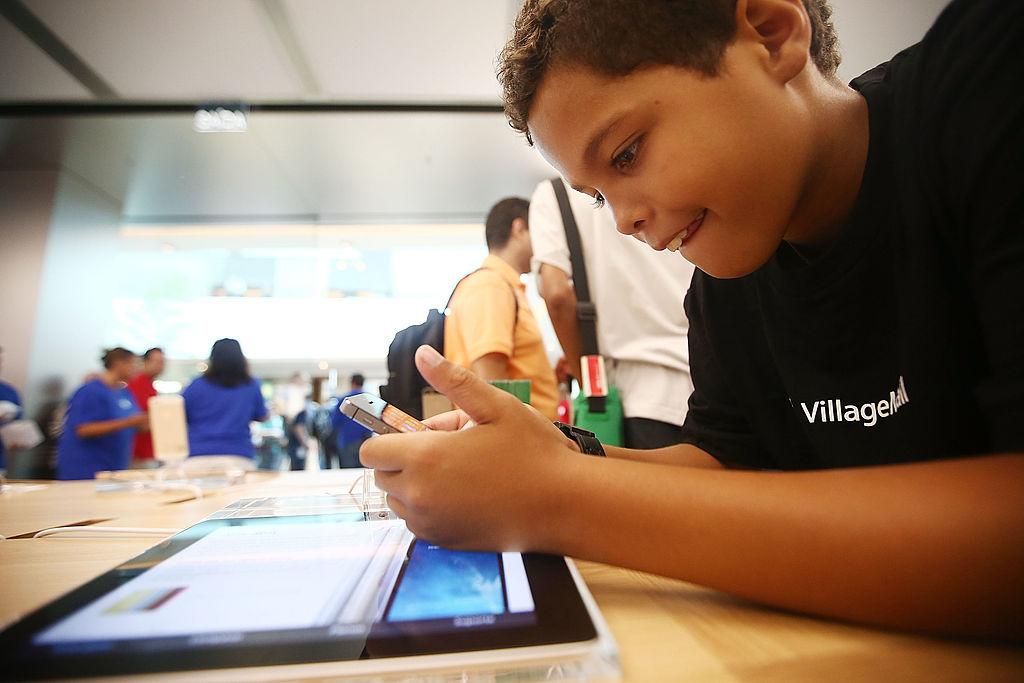 A boy plays with an iPhone in Brazil's first Apple retail store minutes after it opened to the public for the first time in the Village Mall shopping center on February 15, 2014 in Rio de Janeiro, Brazil. (Photo by Mario Tama/Getty Images)

Four out of five apps used by preschool-aged children are designed to make money off their digital experiences, reveals a new study.

Researchers found that kids under five years of age – especially those from low-income households – are often exposed to sneaky adverts and other tactics designed to profit from their game playing.

According to the findings, nearly 99 percent of the children studied had at least one manipulative design in one of their top-used apps.

And youngsters whose parents are of lower education were more likely to use apps incorporating manipulative methods that increase advertising exposure.

Lead author Doctor Jenny Radesky said: “Our findings suggest that design features created to serve the interests of technology companies over children is common, and we need more regulations in place.

“These design tricks disproportionately occur in apps used by children from disadvantaged socio-economic backgrounds, suggesting inequities in how young children’s attention is exploited for monetization.”

Researchers analyzed apps used by 160 children ages three to five and looked for what some experts have called “dark patterns” or tricks aimed to prolong gameplay, prompt children to re-engage with the app, exert purchase pressure, or make them watch ads.

Such tactics were also most prevalent in apps categorized as “general audience,” according to findings published in JAMA Network Open.

Examples of such designs included pop-up messages – such as “Come back tomorrow and get a dragon” – to entice a return to game playing.

Another state, “You can play with these cute tiny animals for a small fee. Just ask your parents,” to encourage in-app purchases.

Characters in some apps say things such as “Don’t just stand there, do something!” when children are idle to keep them playing.

Prompts to sign up for free trials of a paid version of the app showed one character crying when the child had not followed the prompt.

Another character yells “save me!” with fabricated time pressure from a countdown clock, shown at a pause in the game to urge prolonged gameplay.

Lures – stickers or trophies – were also used to entice users to engage with the app repeatedly.

The researchers noted that an app’s success is often based on metrics such as how long and often users engage with them, which is the likely reason behind design tricks that aim to achieve such goals.

But they said youngsters might be unable to identify these tricks, such as distinguishing between a screen intended to sell something versus being part of their game or recognizing that time pressures are fabricated.

Dr. Radesky said: “Children love their favorite media characters so that they may be particularly susceptible to pressure from them, or by virtual rewards flashed across the screen every time they are at a point when they might choose to disengage from the app.

“Adult users might expect to be targeted by ads through apps on digital devices. But children are too young to understand this type of persuasive design, which disrupts their game playing.

“Parents often say their children refuse to hand over devices when it’s time to do something else – like come to dinner or get ready for bed – and the gameplay-prolonging design tricks we found are likely contributing to this avoidable source of family stress.”

She said the findings should encourage government, regulatory, or industry leaders to make changes that ensure children’s well-being and design needs are considered before digital products are released to the market.

Dr. Radesky, a developmental-behavioral pediatrician and Assistant Professor of Paediatrics at the University of Michigan Medical School in the US, added: “Children are avid users of the digital world and deserve access to its opportunities without having to navigate the glut of profit-centered design that currently dominates the market.

“We have the chance to encourage lawmakers to pass legislation that holds the industry accountable for considering children’s best interests, which includes eliminating manipulative design.”

«Previous Post
Imagine That: Young John Lennon Once Told A Reporter The Beatles Weren’t Good Musicians»Next Post
Pushed To The Limit: A Mechanic Has Smashed The World Record For Most Push-ups In An Hour