The footage was obtained from the Strategic Communications Department of the Armed Forces of Ukraine, on Thursday, June 23.
By Joseph Golder June 27, 2022
Facebook
Twitter
Linkedin
Email 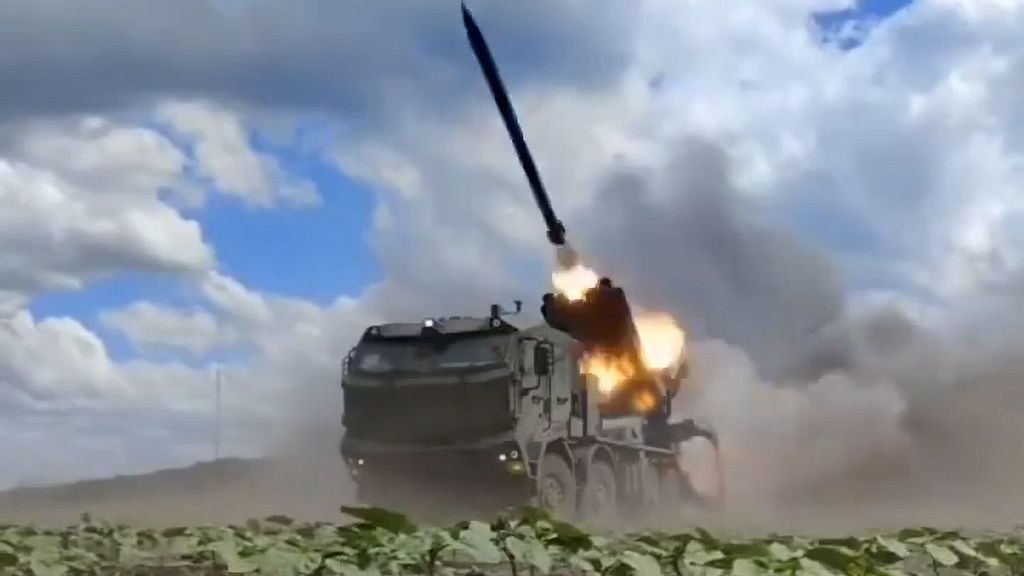 Combat work of the crew of the 220-mm MLRS “Bureviy” on the Tatra T815-7 8×8 chassis against Russian occupiers, in Ukraine. (@AFUStratCom/Zenger)

These are the Ukrainian “Hurricane” multiple launch rocket systems in action.

Ukrainian soldiers removed some branches camouflaging the multiple launch rocket vehicle before it emerges from some undergrowth onto a dirt track, as this footage shows.

They can be seen taking up position, with soldiers then readying its weaponry. A first rocket is then being fired in slow motion before a salvo of rockets take to the skies. The vehicle can then be seen driving away, presumably to be redeployed elsewhere, before the footage ends.

It is unclear where exactly in Ukraine the images were filmed, but the footage was obtained from the Strategic Communications Department of the Armed Forces of Ukraine on Thursday, June 23, along with a short statement saying that the footage shows a “Ukrainian-made MLRS ‘Hurricane’ on a Tatra chassis.”

The BM-27 Uragan, which means ‘Hurricane’ in English, was first designed in the 1970s in the Soviet Union. It is now used by a host of primarily former USSR states, including Ukraine.

The Strategic Communications Department added: “A formidable weapon in defense of our country! Believe in the Armed Forces of Ukraine!”

This week, Russia conducted an anti-ship missile exercise in the Baltic Sea amid escalating tensions with NATO member Lithuania after the latter country blocked the transit of some goods to the Russian exclave of Kaliningrad.

Russian Foreign Ministry press secretary Maria Zakharova has said that Moscow’s response to Lithuania banning the transit of goods sanctioned by the EU, to Kaliningrad will not only be diplomatic but also practical.

But Lithuanian Prime Minister Ingrida Simonyte has accused Russia of lying over the blockade, saying that people can still travel between Russia and Kaliningrad and that the blockade only affects one percent of goods.

British intelligence has claimed that the pro-Russia, so-called Donetsk People’s Republic (DPR) may have lost about 55 percent of its original forces.

President Volodymyr Zelenskyy said that this is a “historic week,” just a day before the EU formally accepted his country’s status as EU candidate on Thursday, June 23.