The images were obtained from the Russian Ministry of Defense (MoD) along with a statement on Friday, June 24.
By Joseph Golder June 27, 2022
Facebook
Twitter
Linkedin
Email 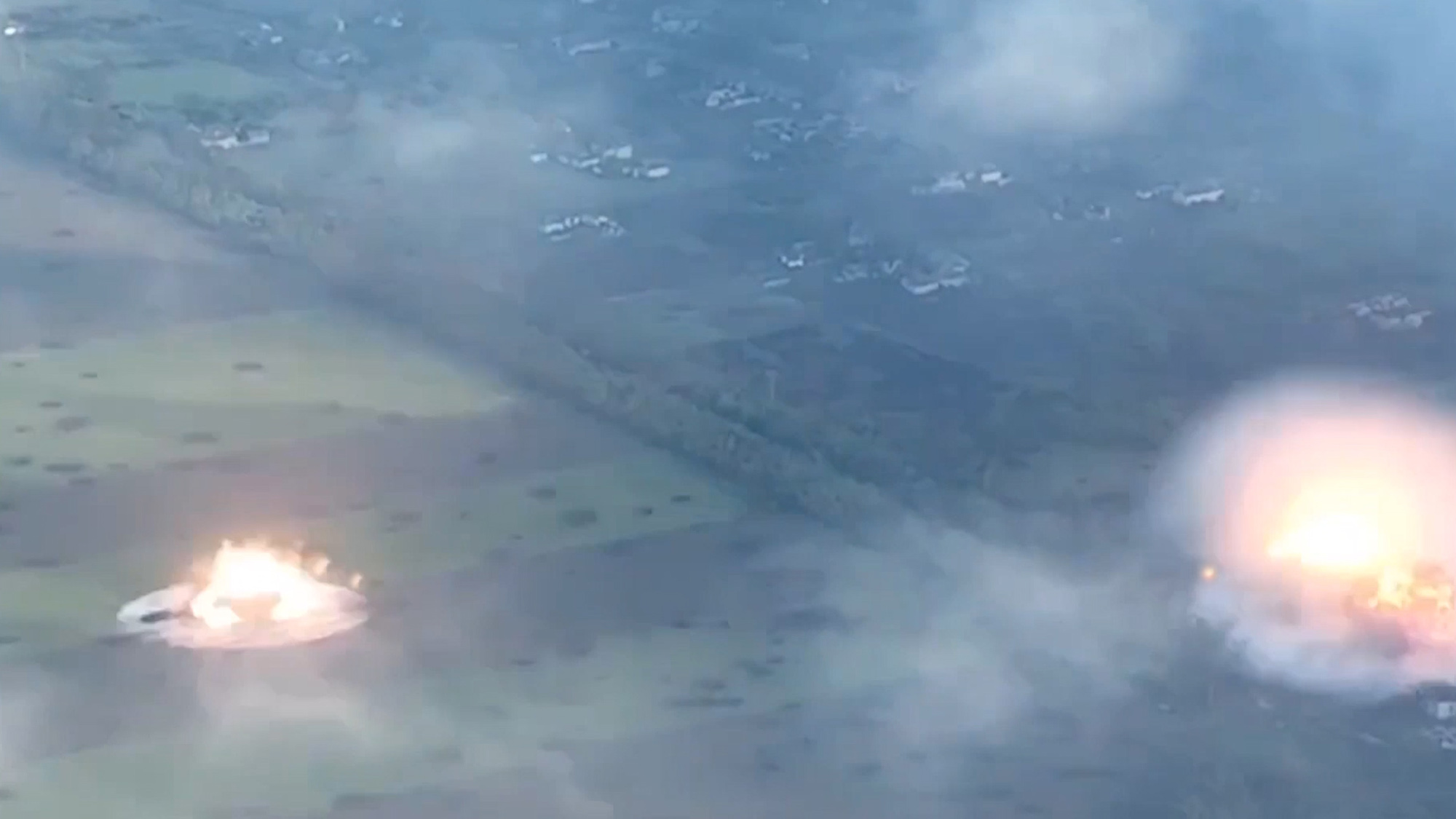 Combat work of Russian TOS-1A Solntsepek on the positions of UAF in Ukraine. (Ministry of Defense of Russia/Zenger)

A Russian thermobaric multiple rocket launcher that is mounted on a tank chassis fires at Ukrainian targets with devastating effects.

The TOS-1A “Solntsepyok” vehicle, which has a multiple rocket launcher mounted on a T-72 tank chassis, is being deployed somewhere in Ukraine and reportedly firing thermobaric warheads at Ukrainian targets, as these images show.

The vehicle can be seen sporting a white ‘Z’ daubed its side. The ‘Z’ is one of the symbols, as well as the letters ‘V’ and ‘O’ that can be seen painted on Russian military vehicles taking part in the invasion of Ukraine.

The footage then cuts to an aerial view, reportedly showing the missiles exploding as they hit the ground. The video then shows missiles being fired at night before the footage ends.

The images were obtained from the Russian Ministry of Defense (MoD) along with a statement on Friday, June 24, saying that they show “the combat work of the crews of heavy TOS-1A “Solntsepek” systems of the Western Military District to destroy fortified, long-term strongholds and positions of the Armed Forces of Ukraine.”

The Russian MoD added that drones assisted the vehicle with targeting.

The MoD also said: “After completing the combat mission, the crews of the TOS-1A ‘Solntsepyok’ in the shortest possible time carry out a change of combat positions and promptly reload the installations.

“There are 24 thermobaric projectiles in the package. They are capable of covering an area of &ZeroWidthSpace;&ZeroWidthSpace;up to 40 thousand square meters [430,000 square feet], while destroying lightly armored vehicles and fortifications.

“It is impossible to hide from the Solntsepeka volley even in trenches and dugouts: after a 200-kilogram [440 pounds] projectile hits the target, the thermobaric mixture dissipates in the air and explodes under tremendous pressure, creating a temperature of 3,000 degrees [5,400 F.]. Even steel armor melts in such an inferno.”

On Thursday, June 23, the European Union approved Ukraine’s application to become a candidate for admission to the bloc, which is currently made up of 27 countries. The decision has been hailed in both Brussels and Kyiv as a “historic moment”, with President Zelenskyy saying that “Ukraine’s future is in the EU”.

British intelligence has estimated that the pro-Russia, so-called Donetsk People’s Republic (DPR) has lost 55 percent of its original forces.