Rat Hell: Homeowner Forced To Live Next Door To Rat-Infested House Left To Rot For Over 20 Years

“I moved into the house in 1998, the neighbor left in 1997, and up until a few years ago, I would see him once every five years.”
By Simona Kitanovska June 27, 2022
Facebook
Twitter
Linkedin
Email 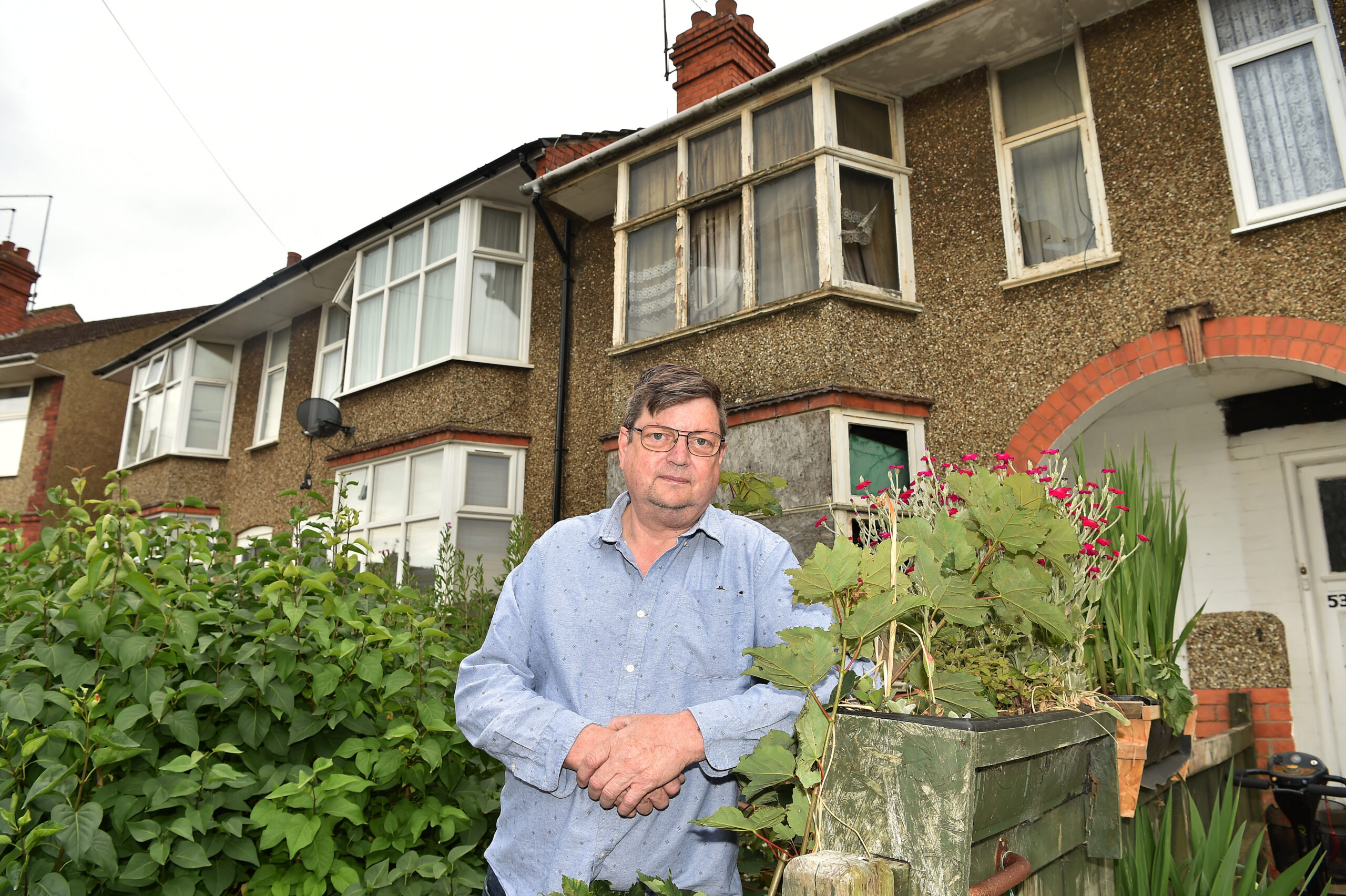 A fuming dad has slammed council bosses for failing to act after being forced to live next door to a rat-infested abandoned house left to rot for over 20 YEARS. (Emma Trimble/Zenger)

A fuming dad has slammed council bosses for failing to act after being forced to live next door to a rat-infested abandoned house left to rot for over 20 years.

David Nicholls, 59, says he feels like he’s living beside a “rat hotel” after hearing the rodents under his floorboards and seeing them scurry across his garden.

The dad-of-two moved into his terraced home on Murray Avenue in Abington, Northampton, with his wife and two kids in 1998.

His next-door neighbor had moved out the year before, and since then, he says the property has been neglected to the point it has become a serious health hazard.

The unsightly boarded-up house has smashed windows, messy, overgrown gardens, and the squalid interior is piled high with boxes and bags.

David says it has become so run down that dozens of rats have invaded the address, and some neighbors have even moved out because of the problem.

He is now calling on West Northamptonshire Council to take enforcement action, allowing them to take over the property and put it back into use as housing.

David said: “I moved into the house in 1998, the guy next door left in 1997, and up until a few years ago, you would only see him once every five years or so.

“He’d spend a night there, light a bonfire, and then he was off again; the house has just been abandoned and left to rot since then.

“All my neighbors have seen rats recently – we’ve been putting out traps for them. I’ve found loads of rat feces in my loft.

“A couple of years back, the council came out to put a new door on as it kept coming off its hinges; apart from that, they have done absolutely nothing.

“I had fixed the door myself before that and was able to see inside; it is completely uninhabitable, piled waist-high with boxes and bags of who knows what.

“It is a health hazard and a fire hazard, and that is why the local authority should now be able to do something about it. It has been a nightmare.

“There is no gas, electricity, or water supply to the property, and it is just crumbling. The garden is overgrown, and I’ve known people move off the street because of it.

“It’s going to bring property prices down without a doubt, and that is why I think people are moving out while they can.

“There have been rats beneath my floorboards, and in the walls; my kitchen roof is covered in rat droppings all between the joists. It’s unbelievable.

“There are children with families living on this road, yet our pleas to the council keep falling on deaf ears.

“Although it is privately owned, they have the power to take enforcement action whenever there is an environmental health issue or fire risk.

“I can’t see how a boarded-up house with smashed-in windows, with glass everywhere and rats scurrying about, isn’t classed as a health risk.

“It is basically the perfect hotel for rats.

“My house is attached to this place, and the worry has affected my wife’s health. Our two children grew up and moved out, luckily, as I wouldn’t want them living in this.

“I don’t know why it has taken this long. It’s a shame as it has the potential to be a really nice house.

“The council has a statutory duty to protect the public, yet I’m living in these conditions through no fault of my own.

“I wouldn’t expect anyone to live next door to a house like this regardless of any situation.

“I just can’t understand how it has been allowed to continue for so long.”

David has repeatedly asked the council to issue an ’empty dwelling management order,’ which gives local authorities the power to take over unoccupied homes and use them as housing.

The former engineer, now a full-time carer for his wife Jackie, 54, added: “What really annoys me is I have been reporting this property for years for being empty.

“The council knows the property is empty. They keep saying it is working with the owner, but nothing is changing.

“They have never enforced an empty dwelling management order, so all that reporting was for nothing.

“The council should be looking to put the property back into normal use. You’re just waiting for them to do something and wondering when it will be.

A West Northamptonshire Council spokesperson said: “The council continues to investigate and progress action in line with the latest findings from the local government ombudsman.

“WNC confirms that where possible it will take enforcement action to secure improvements to the property and the neighborhood when the law allows.”