Hissstory: Whopping 216-lb Python Caught In Florida Is Believed To Be Biggest In State’s History 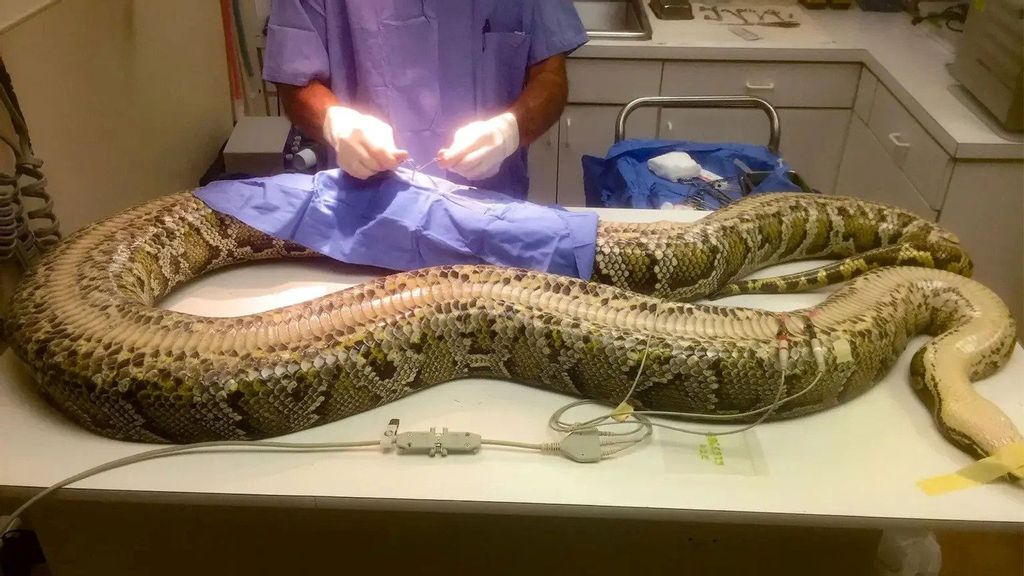 A whopping 216 lbs python has been caught in Florida - believed to be the biggest in the state's history. (Simon Galloway/Zenger)

A whopping 216-lb python has been caught in Florida and the pregnant female is believed to be the biggest ever caught in the history of the state.

Experts caught the 18-foot, pregnant female after using a male python as bait.

The Burmese python was discovered in the Everglades, where biologists wrestled with it for 20 minutes, in December 2021, with the Conservancy of Southwest Florida announcing on Wednesday, June 22 that it was the biggest Burmese python ever caught in the state.

The snake was eventually captured and killed, before being put in a freezer for several months.

It is estimated that she was up to 20 years old when caught, and was the approximate height of a giraffe if stretched out vertically.

Pythons have become pests in Florida as invasive snakes with no major predators, out-competing native species.

Wildlife biologist Ian Bartoszek said: “This season we tracked a male scout snake to a region of the western Everglades that he frequented for several weeks.

“We knew he was there for a reason, and the team found him with the largest female we have seen to date.

“The removal of female pythons plays a critical role in disrupting the breeding cycle of these apex predators.

“They are wreaking havoc on the Everglades ecosystem and taking food sources from other native species.

“This is the wildlife issue of our time for southern Florida.”

The snake was dissected in April and was found to have 122 eggs developing in its abdomen – breaking another record- that of the most eggs produced by a female during a breeding cycle.

‘Hoof cores’ also found inside the snake’s stomach indicated that a white-tailed deer was the beast’s last meal before it was caught.

To date, the Conservancy of South West Florida’s python removal program has removed over 1,000 pythons in a 100-square-mile area in south-western Florida, the organization said.

Prior to the latest finding, the heaviest female python found in the state weighed 182 pounds, the group added.

The Florida Fish and Wildlife Conservation Commission (FWD) says: “The Burmese python is a large nonvenomous constrictor that is an invasive species in Florida. Burmese pythons are found primarily in and around the Everglades ecosystem in south Florida where the snake represents a threat to native wildlife. The FWC works with partners to manage Burmese pythons in a variety of ways. However, we encourage the public to get involved, too!

“Pythons can be humanely killed on private lands at any time with landowner permission – no permit required- and the FWC encourages people to remove and kill pythons from private lands whenever possible.”