A quarter of the profit from the non-fungible tokens' sales will go to help those in need in Hong Kong and the Philippines.
By Michelle D. Madsen June 27, 2022
Facebook
Twitter
Linkedin
Email 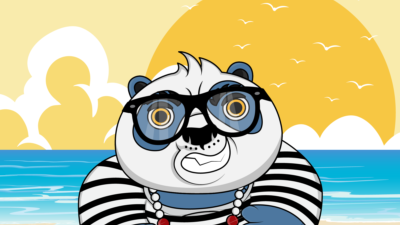 One of  the 10,000 unique Bored Pandas NFTs is depicted. The company says it “has reserved 600 of them for our team, marketing and community treasury, giveaways and gifts.” (Bored Panda NFT)

A collection of 10,000 one-of-a-kind Bored Panda NFTs has been developed to improve the lives of communities living below the poverty line in two Asian countries. The company says it will donate 25 percent of the net profit generated by the sale of the non-fungible tokens (NFTs).

The staff at Bored Panda NFT collaborates with organizations and people in Hong Kong and the Philippines to provide assistance to the needy.

“We’re an NFT platform that allows people to invest in an exciting global financial movement while helping to run programs that support people impacted by extreme hunger and poverty,” Bored Panda NFT says on its website, pointing out that the company “was created to use the power of NFTs to help create a more equal and just world. …. As well as running our projects, we also work alongside organizations that support homeless people, people living in poverty and people living in insecure housing.”

Hong Kong, one of the most densely populated cities in the world with some of the most expensive housing, has a glaring economic divide. The Numbeo cost of living database points out that on average, housing accounts for nearly 45 percent of  the average person’s monthly expenses.  In the Philippines, 26.1 million people out of about 114 million are living in poverty as of May of this year, according to the country’s Commission on Population and Development.

“Across developing countries, thousands of people are struggling to put food on the table and buy clothing to keep their children warm. Despite the presence of many large NGOs in these countries, small communities fall through the cracks and don’t receive the support they need. We believe that NFTs have the potential to help solve some of the world’s most pressing social issues,” Bored Panda NFT says.

“Thousands of individuals all throughout the world’s developing nations are battling to meet basic needs like putting food on the table and keeping their children warm by purchasing clothing” the enterprise says. “In spite of the fact that [Hong Kong and the Philippines] are home to a significant number of large nongovernmental organizations (NGOs), some smaller towns still do not receive the necessary help. We are of the opinion that non-governmental organizations (NGOs) have the capability of contributing to the resolution of a number of the world’s most urgent social problems.”

Panda Holders will have access to a VIP Channel featuring a variety of projects and artists.

Other online entry points for the collection include: Twitter: twitter.com/boredpanda_nft and Discord: discord.com/invite/mhYYbXKac6