This round, the church is in a unique position to be an agent of healing and reconciliation. 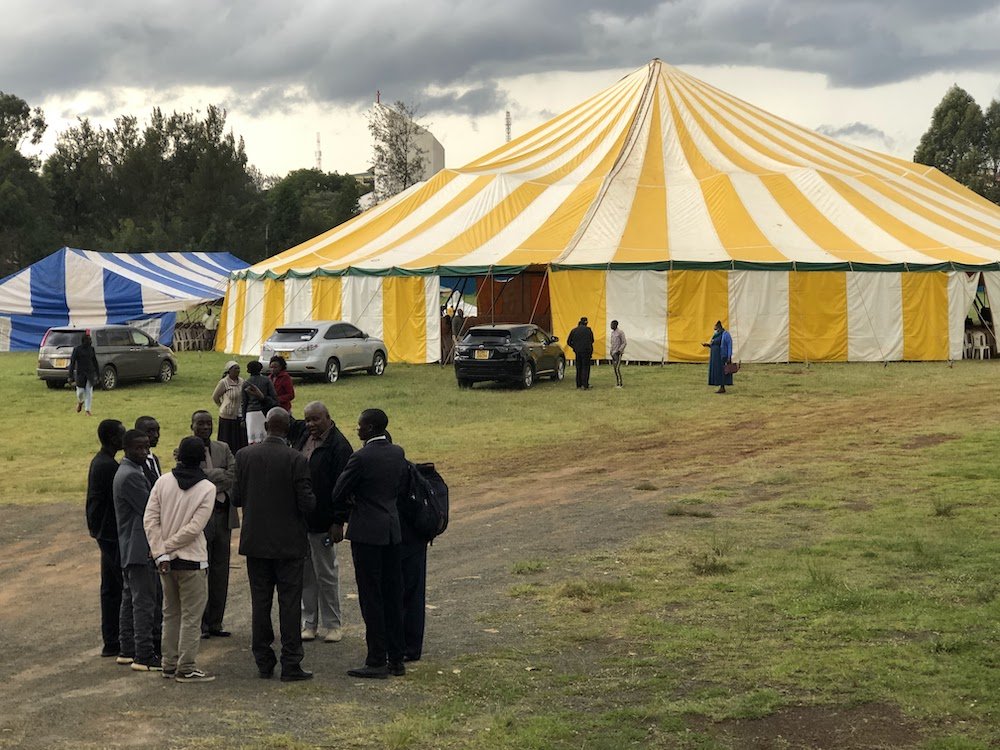 Christians gathered in tents in Eldoret, Kenya, earlier this year to pray for a peaceful election season. (Robert Carle)

With a history of bloody elections, Kenyans are praying for a peaceful one.

Thousands gathered in tents in the center of Eldoret, Kenya, to hold an all-night prayer meeting, known as a “caravan,” to foster a calm voting season.

General elections are scheduled for August 9. Voters will elect the president, members of the National Assembly and Senate.

“This is a movement of repentance and dedication of our land to the Lord,” said Margaret Kimani, treasurer of the Eldoret Gospel Ministries Association, which hosts the ecumenical prayer meeting. She said the caravan takes place in every county in the country. “We have had lots of wars and bloodshed. Our message to politicians is: Don’t be an influence to fight and shed blood,” she said.

Margaret and her husband, Matthew, are ethnic Kikuyus. They had to flee Eldoret, the largest city in the Rift Valley, when it dissolved into Kalenjin violence against their Kikuyu neighbors following the 2007 election.

Memories of the violence that followed the 2007 election haunt the religious leaders of this region.

In December 2007, opinion polls showed that opposition candidate Raila Odinga, a member of the Luo tribe, had a comfortable lead over incumbent president Mwai Kibaki, who is Kikuyu. Still, the final vote tally showed that Kibaki had won the election by a narrow margin. International election observers reported widespread manipulation in vote counting and declared the election was illegitimate.

Fifteen minutes after Kibaki declared victory, ethnic-based violence erupted in many parts of Kenya. At least 1,300 people were killed, and 600,000 people were driven from their homes. The Rift Valley was the epicenter of some of the worst violence. Kalenjin youth traveled around in trucks, evicting hundreds of thousands of so-called Kalenjin foreigners, most of whom had lived in the Rift Valley for generations.

When Kikuyu sought protection in an Assemblies of God church in Eldoret, Kalenjin youth barricaded the door of the church from outside and set the church on fire, killing 30 women, children and elderly people. Most Kikuyus in the Rift Valley ended up fleeing their homes and settling elsewhere in the country. In other parts of Kenya, Kikuyu youth committed atrocities against Luo and Kalenjin residents.

In the lake town of Nakuru, a Kikuyu criminal organization circumcised Luo men before beheading them. The bloodshed destroyed Kenya’s image as a peaceful, stable African country. Tourism and foreign investment came to a screeching halt.

Simwa said the church was crucial in bringing peace back to the Rift Valley in the wake of the election violence.

“As the killing was going on, we stood our ground,” Simwa said. “We were doing peace brigades. We were telling people they should not fight. Healing did not begin with politicians. Healing began with grassroots repentance and reconciliation.”

“This time,” Simwa said, “We are being proactive rather than reactive. We are praying before, not after, the elections.”

“In the lead up to the 2007 elections, church leaders erred in dividing sharply along partisan political lines,” said Gideon Mudenyo, general secretary of the association. “This blunted the ability to be a force for peace.”

This time around, denominational leaders are remaining politically neutral in their public statements. This empowers the church to be a force for civility and peace.

“We want all politicians to know that we pray for them,” Kimani said. “In case of disputes, we are in the middle. We can be mediators.”

In this year’s election, class is emerging as a factor along with ethnicity.

Raila Odinga has the support of President Uhuru Kenyata, and William Ruto, a Kalenjin, is running a populist campaign that defines him as a representative of the downtrodden working poor.

Ruto claims to represent the interests of “hustlers” — Kenya’s vast hardworking underclass — and not the interests of the “dynasties,” like the Kenyattas and Odingas. In Ruto’s narrative, the dynasties have created a corrupt, manipulative “deep state” that serves the interests of oligarchs and must be dismantled.

Right now, polls show Ruto and Raila in a dead heat, and the Eldoret Gospel Ministers Association expects the election outcome will be ambiguous. “We already know that somebody will say there was cheating and rigging. But they should pursue challenges through peaceful, not violent means,” Simwa said.

One resource that Kenya has in 2022 that it did not have in 2007 is an independent judiciary.

Simwa described Kenya’s Chief Justice Martha Koome as a “courageous and godly woman who does not have a heart of corruption.” Koome enjoys bipartisan respect in Kenya. During her tenure, she has been as likely to rule against the government as to rule in its favor.

“This is one reason things are changing for the better in Kenya,” Kimanai said. “Women are assuming positions of power.”

In 2007, the Supreme Court had little credibility because it was perceived as a tool of the government. “Not anymore,” Simwa said. “If there are election irregularities, the Supreme Court will issue a ruling on them, and Kenyans will respect the ruling.

The church is in a unique position to be an agent of healing and reconciliation. In Kenya, churches are a mix of ethnicities. Church services are rarely held in tribal languages. Instead, churches conduct services in a mixture of Kiswahili and English, sometimes peppered with phrases from Sheng, Kenya’s hip new urban language. Churches are a melting pot — ethnicities are blurred, and Christian identity transcends ethnic identities.

About the author: Robert Carle is a professor at The King’s College in Manhattan. Dr. Carle has contributed to The Wall Street Journal, The American Interest, Religion Unplugged, Newsday, Society, Human Rights Review, The Public Discourse, Academic Questions and Reason. Carle is reporting from Eldoret, Kenya.