The Sirex woodwasp lays its eggs on pine trees in a mucus and a fungus that are both deadly to the host.
By Joseph Golder June 24, 2022
Facebook
Twitter
Linkedin
Email 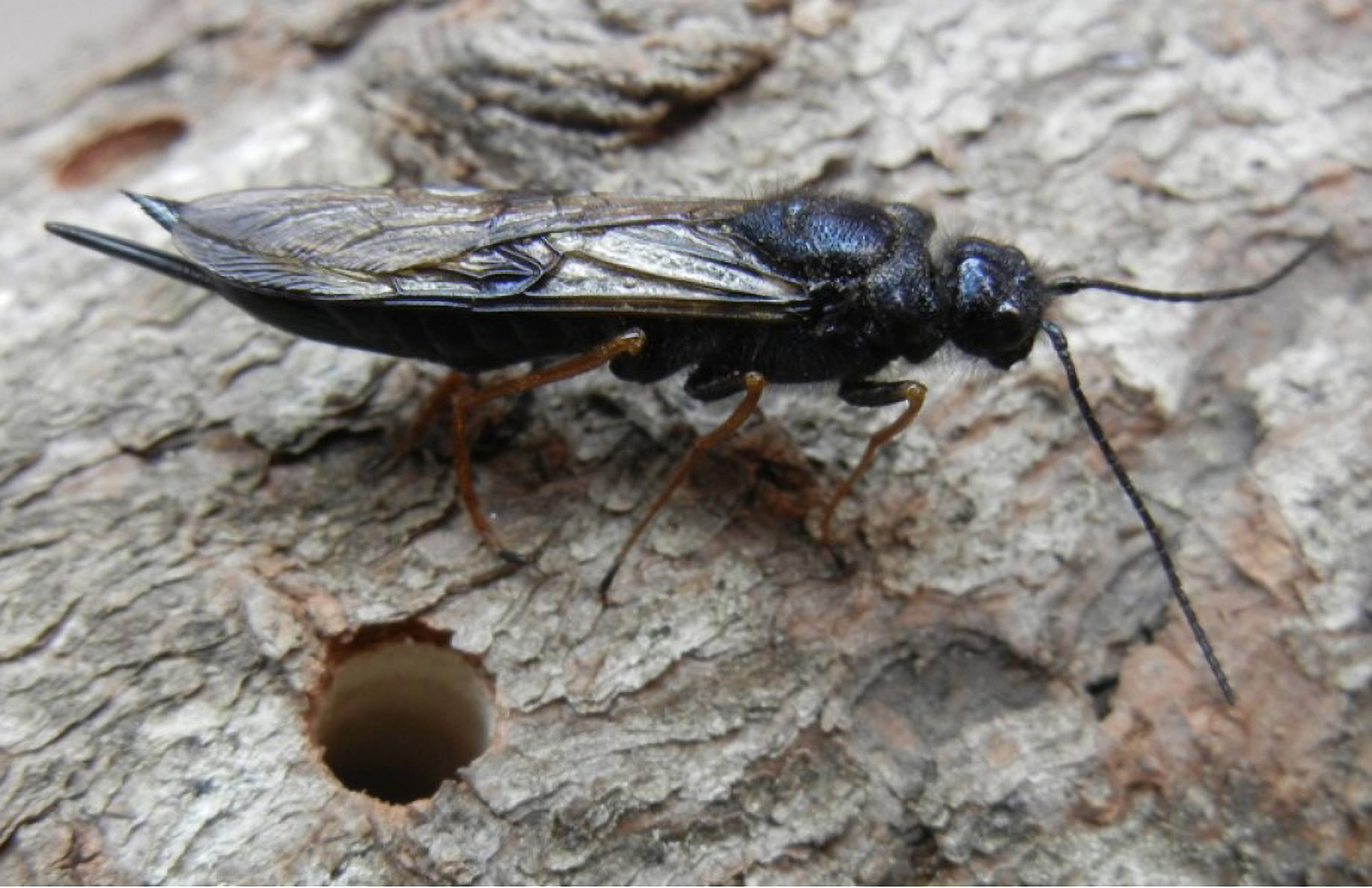 A superwasp able to produce 1,000 offspring is threatening vast forests in North America, a new study has revealed.

The Sirex woodwasp lays its eggs on pine trees in a mucus and a fungus that are both deadly to the host.

The species – native to Asia, Europe, and North Africa – has already wiped out forests in New Zealand, South America, and Australia.

Now the wasp – which can measure up to one and a half inches, is threatening North American pine forests.

In the U.S. climate, a single female would be able to produce more than 1,000 offspring – 100 times more than in the southern hemisphere.

Zenger News obtained a statement from Dartmouth College on Thursday, June 16, saying: “While a single female Sirex wood wasp in Spain has the potential to generate about 10 offspring over five subsequent generations, in North America each female could potentially produce 1,000 offspring.”

The statement, referencing a Dartmouth College study, also stressed that “nature’s defenses are currently keeping the insect under control.”

The Dartmouth College study, funded by the U.S. Forest Service and published in the academic journal NeoBiota, says America needs to be constantly on alert.

The statement warns that the breed “has the potential to reproduce at rates 2-3-times higher in North America than in its native range in Europe, Asia and North Africa.”

It went on: “While the wasp’s impacts have been limited so far, it could pose a threat under the right conditions as it spreads throughout its newly adopted continent.”

Flora Krivak-Tetley, a postdoctoral researcher at Dartmouth and first author of the paper, said: “Understanding why invasive species are destructive in some places and not in others gives us the tools to respond to them quickly.”

She added: “The Sirex wood wasp is perfect for exploring this question because its impacts on forests vary in different parts of the world.”

The statement explained: “Unlike yellow jackets and other common wasps, Sirex wood wasps eat wood rather than fruit and meat.

“The insect injects a fungus and a dose of venom into trees to weaken and even kill them.

“They also place their eggs in the trees, where the larvae hatch and feed on wood that is pre-digested by the fungi.”

Krivak-Tetley said: “These wasps are cool, and a bit different than wasps many of us are familiar with.”

Krivak-Tetley, who conducted the research as a Ph.D. candidate at Dartmouth, added: “The larvae tunnel through tree trunks, mature inside the wood, and emerge as adults. They don’t sting people, they sting trees.”

The Dartmouth College statement said: “The Sirex wood wasp is considered to be a minor tree-eating scavenger in its native range. In those areas, it is kept in check by natural enemies and the limited availability of suitable pine trees to serve as hosts.”

But it stressed that the insect is able to “kill large numbers of trees and be expensive to manage in non-native areas.”

It gave the examples of New Zealand, Australia, Chile, Argentina, and other countries in the Southern Hemisphere, saying that these are places where the wasp “has no natural enemies.”

The statement said that “the invasive is responsible for major attacks against stands of pine trees that were imported for commercial plantations.”

They added: “Unlike other invasive insects that may be limited in range by sensitivity to temperature and other climatic conditions, Sirex wood wasps are not restricted by temperature extremes within their range. They are only constrained by the presence of predators, competitors and the availability of host pines.”

Matthew Ayres, professor of biological studies at Dartmouth and senior researcher on the study, said: “This wasp will continue to expand its distribution in North America”.

He added: “It can apparently tolerate the climate anywhere that pine trees occur.”

The statement explained: “The insect’s invasiveness is compounded in pine forests that are overstocked and water-stressed. Sirex wood wasps are also difficult to monitor, which makes them harder to control.

“The wasp was first detected in North America in 2004. It is believed to have entered the continent inside wood packaging material used in shipping at a cargo port on Lake Ontario in upstate New York. Since first being introduced, the Sirex wood wasp has migrated throughout the northeastern United States and parts of Quebec and Ontario in Canada.”

Ayres said: “Non-native species arrive from distant lands all of the time.”

The expert added: “Sirex wood wasps arriving from Europe found forests that resembled their homeland, but that also included many of the same natural enemies – from nematodes to woodpeckers.”

The study assessed the impact of the Sirex wood wasp in the U.S.’ Northeast, comparing data to information on the species’ activities in its native habitat of Galicia, Spain.

The statement said: “According to the research in New York, Pennsylvania and Vermont, the wood wasp has the potential to be over 150 percent more productive in the areas studied in the U.S. than in Spain. As a result, there is increased potential for rapid population growth and localized outbreaks of the wasp in North America than in the insect’s native range.

“While a single female Sirex wood wasp in Spain has the potential to generate about 10 offspring over five subsequent generations, in North America each female could potentially produce 1,000 offspring.”

Krivak-Tetley said: “When we first observed the Sirex wood wasp in North America, we said ‘oh no, we better brace ourselves for this.'”

She added: “We are not sure how it will go in other parts of the continent but, for the moment, nature has rallied to its own defense against this wood wasp.”

The statement explained: “The U.S. West, with pines already at risk from drought, fire and beetles, could also be susceptible to the invasive species. The wildcard is whether natural competitors and predators will keep them in check, or if the larger resource base will allow them to spread.”

Ayres said: “This wasp will continue to spread throughout North America and can be expected to eventually show up everywhere there are pine trees.

“The good fortune we’ve enjoyed so far with the Sirex wood wasp could change if the insect reaches areas with higher resource availability and fewer natural enemies.”

The researchers are now working on comparing ways in which the wood wasp populations grow in the north and south of the country to “better understand the conditions that lead to impactful invasions”.