The video was obtained from the Russian Ministry of Defense.
By Joseph Golder June 24, 2022
Facebook
Twitter
Linkedin
Email 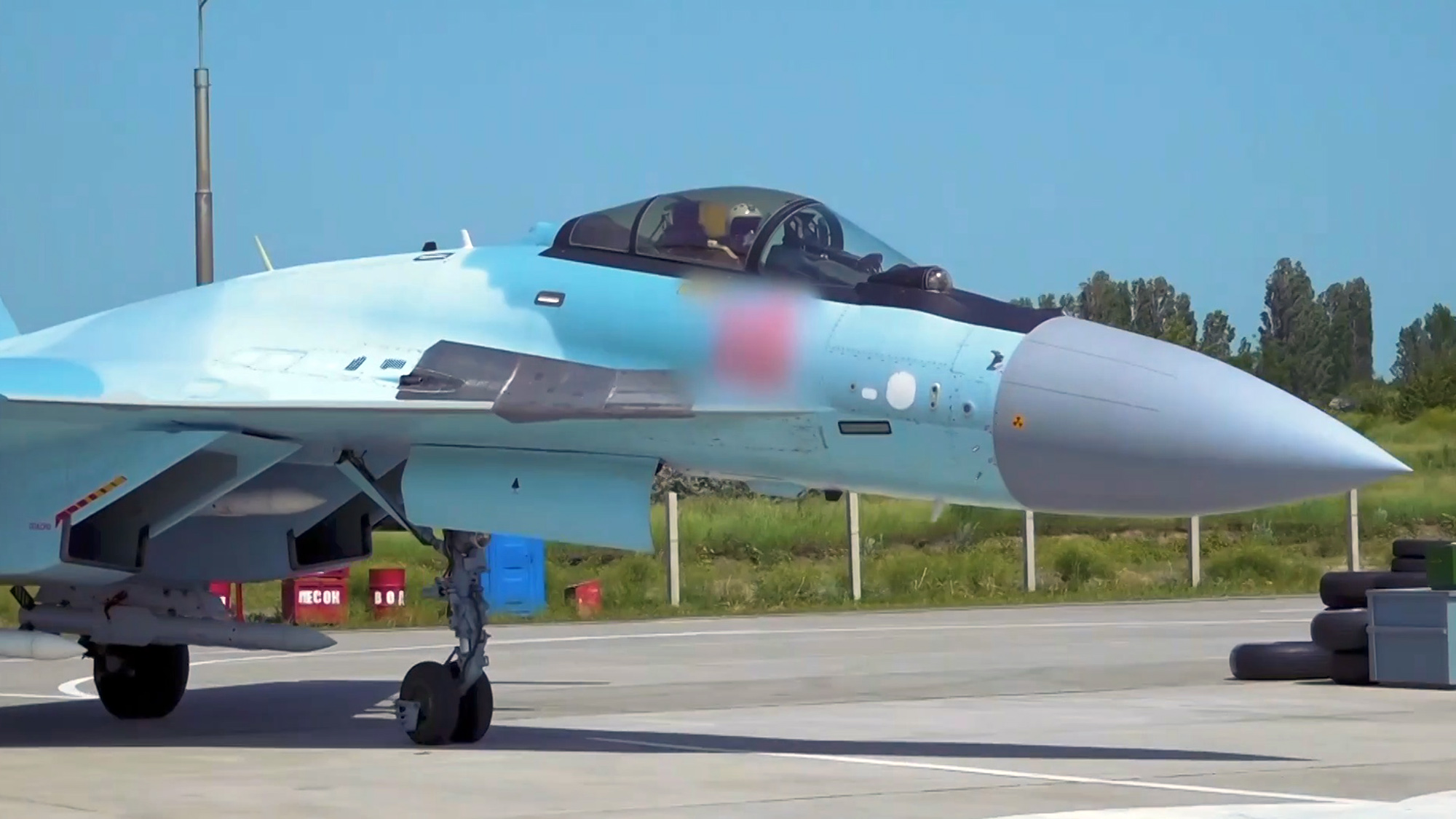 Combat work of the crews of Russian Su-35 fighters during air strikes on military infrastructure and military equipment of the Armed Forces of Ukraine in Ukraine. (Ministry of Defense of Russia/Zenger)

These images purport to show a Russian fighter jet firing on Ukrainian targets.

It is currently unclear where precisely in Ukraine the Russian jet firing its ordnance was located, but the images were obtained from the Russian Ministry of Defense (MoD) on Wednesday, June 22, along with a short statement saying that they show “crews of Su-35 fighter jets carry out air strikes on military infrastructure and military equipment of the Armed Forces of Ukraine.”

The Russian MoD added: “The Armed Forces of the Russian Federation, in the course of a special military operation, continue to deliver precision-guided strikes against military infrastructure and military equipment of the Armed Forces of Ukraine. The crews of Su-35 fighters are also involved in these tasks. Aircraft takes off from temporary airfields.

“Before departure, aviation equipment undergoes comprehensive training by specialists of the engineering and technical staff – the operation of all systems of aviation complexes is checked, the suspension of weapons, refueling, and preparation of aircraft for departures.

“To destroy the aircraft of the Armed Forces of Ukraine, destroy radar stations, air defense systems, the crews use high-precision guided missiles of various air-to-air and air-to-surface classes.

“Departures for combat are carried out in daylight and at night in all weather conditions.”

We have not been able to verify the footage or the claims independently.

Russia invaded Ukraine on February 24 in what the Kremlin calls a “special military operation.” Today marks the 119th day of the invasion.

Russian Foreign Ministry press secretary Maria Zakharova has said that Moscow’s response to Lithuania banning the transit of goods sanctioned by the EU to Kaliningrad will be not only diplomatic but also practical.

Ukrainian forces have said they have been successfully thwarting fresh Russian attempts to advance in the Kharkiv region of north-eastern Ukraine. However, Russian forces have captured several settlements near Lysychansk and Sievierodonetsk, with 568 civilians believed to be still sheltering in Sievierodonetsk’s Azot chemical plant.

Iryna Vereshchuk, Ukraine’s Deputy Prime Minister and Minister for Reintegration of the Temporarily Occupied Territories, has urged locals in the Kherson region to evacuate, to help Ukrainian forces “deoccupy” the area.

President Zelenskyy said a “historic week” has begun as Kyiv awaits a decision from Brussels regarding its EU candidate status. The EU expected to approve the application by the end of the week.

This comes after the European Parliament adopted a resolution recommending that the European Union grant Ukraine the status of candidate country for EU membership. Some 438 MEPs voted in favor of the resolution, with 65 voting against and 94 abstaining.