The video was obtained from the People's Militia of the DPR.
By Joseph Golder June 24, 2022
Facebook
Twitter
Linkedin
Email 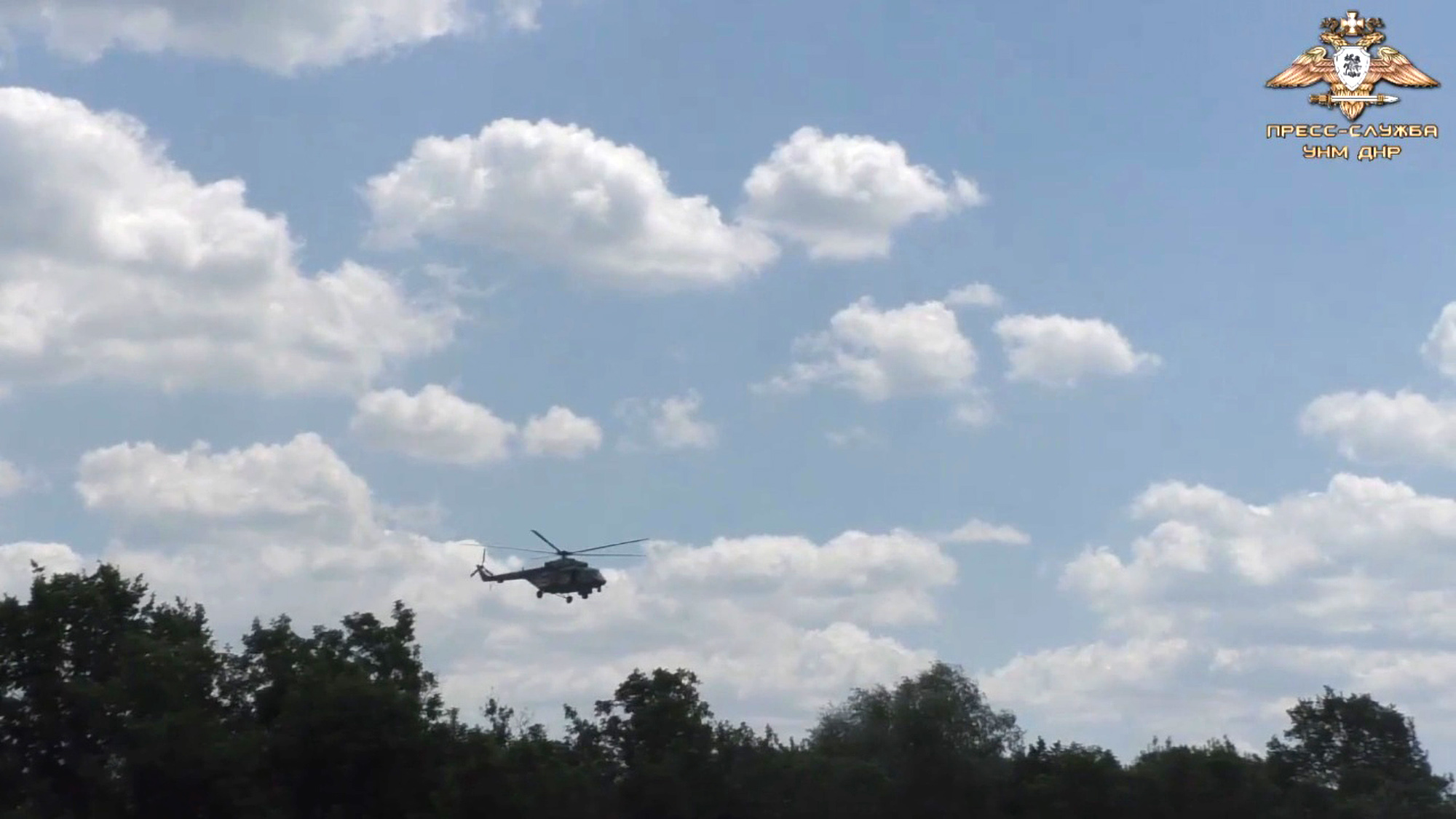 Combat work of the Artillerymen of the 9th regiment of the NM DPR against Ukrainian forces in Ukraine. (@unmdnr/Zenger)

The footage begins by showing a helicopter crossing the sky before cutting to what appear to be two BM-21 Grad multiple rocket launcher vehicles.

One of the vehicles can be seen flying what appears to be a pirate skull and crossbones flag while the other appears to fly the Russian flag, with the Russian coat of arms on it. Both vehicles have a white ‘Z’ daubed on their side.

A soldier can be seen speaking into a walkie-talkie, with the vehicles in the background, before they suddenly start firing their missiles at unseen targets.

A spokesman for the DPR said: “The artillery unit of the 9th Regiment of the People’s Militia of the DPR will inflict fire damage on military concentrations of enemy manpower.”

A DPR officer also said: “We will suppress the firing points from where artillery shelling of Donetsk, Makeevka, Yasinovataya is carried out.

“Now our drone is flying there, we will identify the target. There are a lot of them there, we try to destroy their crews as much as possible, we work with counter-battery combat.

“Basically we have to lie in the field, because you are under fire, you need to have high endurance and strong nerves.

“I would like to say Dear Vladimir Vladimirovich (Putin), you and I know that in difficult times we have remained faithful to Russia.”

An official statement from the DPR issued on the morning of Wednesday, June 22, reads: “Over the past 24 hours, according to information from the DPR JCCC [Joint Center for Control and Coordination of the Ceasefire Regime], the enemy fired more than 400 shells from Uragan and BM-21 Grad multiple launch rocket systems, as well as from 155-, 152- and 122-mm cannon artillery, as well as 120-mm mortars.

“The ordnance was fired at the districts of 13 settlements of the Republic. As a result of the shelling, one civilian was killed and 13 were injured, of which 3 were children. Twenty-nine residential buildings, seven civilian infrastructure facilities and one vehicle were damaged.

“Information about injured civilians and damage to infrastructure is being determined. The joint actions of the military personnel of the Donetsk People’s Republic and the Armed Forces of the Russian Federation destroyed the following enemy weapons and military equipment: one BM-21 Grad MLRS, one M-777 howitzer, two trucks and more than 30 personnel. Two enemy firing points were suppressed in the areas of the settlements of Avdiivka and Kurdyumovka.”

This week, Russia conducted an anti-ship missile exercise in the Baltic Sea amid escalating tensions with NATO member Lithuania after the latter country blocked the transit of goods to the Russian exclave of Kaliningrad.

United States President Joe Biden has promised Kyiv another one billion dollars in security assistance and weapons. And General Mark Milley says Russia has lost around 20 to 30 percent of its armored force during the ongoing invasion.

Independent Russian journalist Dmitry Muratov has auctioned off his Nobel Peace Prize medal for USD 103.5 million, with all the proceeds going to help Ukrainian refugees.